Recent warning signs suggest that the Virgin Islands is now seeing local transmission of Covid-19, which could mean that the highly contagious disease is much more widespread here than previously …

END_OF_DOCUMENT_TOKEN_TO_BE_REPLACED 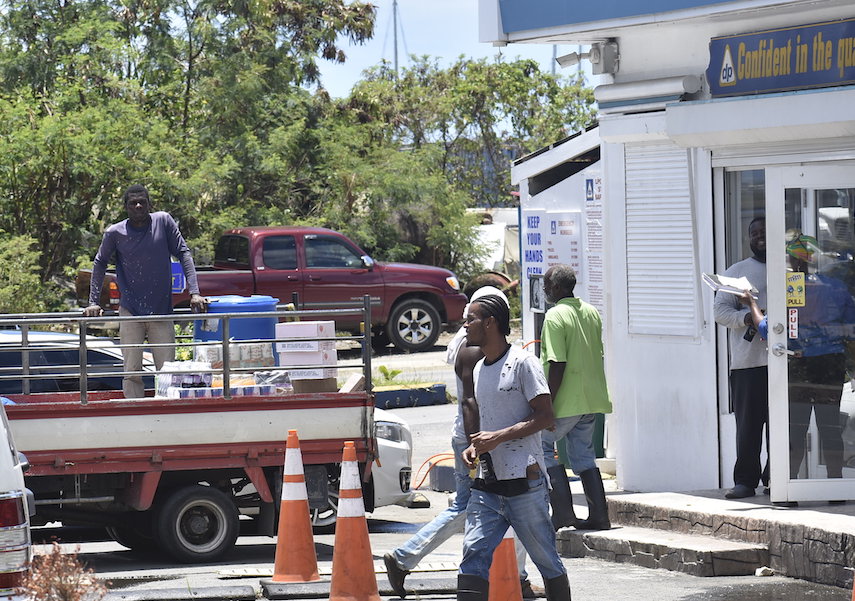 Delta gas station in Pasea was fairly busy on Monday as the delivery system got under way. (Photo: CLAIRE SHEFCHIK)

Recent warning signs suggest that the Virgin Islands is now seeing local transmission of Covid-19, which could mean that the highly contagious disease is much more widespread here than previously understood.

To fight back, the government should dramatically ramp up testing and extend the lockdown under a sustainable system that ensures everyone can quickly access food, medicine and other supplies.

Up to late last week, the territory’s leaders continued to celebrate the relatively low number of Covid-19 cases here. But two more cases discovered in recent days — one of which apparently led to a tragic death — are among several red flags that suggest the five confirmed cases here don’t tell the whole story.

One issue is testing. The territory hasn’t carried out enough tests to meet the bar advised by experts here and abroad. The 90 completed so far mean that about 0.3 percent of the population has been tested, but officials at the United States Centers for Disease Control recommend testing about twice that many people per capita in order to have a sound basis for policy decisions (see page one).

Additionally, recent accounts from residents who tested negative raise questions about whether the VI system is adequately addressing the possibility of false negatives, which experts abroad have suggested could make up as many as 30 percent of total negatives.

For this reason, we were glad to hear the chief medical officer say that 10,000 test kits have been ordered and that officials plans to launch a mass testing programme as soon as possible. We hope this effort begins straightaway.

Meanwhile, given the many unknowns, strict lockdown measures should continue beyond this week. But the current system is not yet working.

From the start, leaders have tried to reinvent the wheel as they wrote the lockdown rules, taking the highly unusual step of closing grocery stores, pharmacies and other essential services. But their eagerness to limit social contact has not been matched by the foresight and planning needed to ensure that everyone safely gets the supplies they need.

In early April, the total business lockdown caused a dangerous three-day rush on grocery stores. Then this week, in an apparent attempt to avoid repeating that blunder, government quickly implemented a delivery system.

Enabling deliveries was a great idea — in fact, we recommended this step on this page two weeks ago — but it is a massive effort and the government has struggled to get it right in spite of the best intentions of leaders and the tireless work of public officers, non-profit organisations and volunteers.

As a result, residents are crying for help. They include mothers who can’t feed their children, vulnerable seniors with no food, and people who waited days only to see their orders cancelled. As of today, we were not convinced that it is possible to reform the delivery system to the point of sustainability.

If not, the government needs to change course. To that end, leaders can consider adopting a system like the ones in place in the Cayman Islands, Panama and other countries, which are allowing essential businesses to remain open longer term under strict rules designed to reduce crowding.

Like everyone else, we fervently hope that there are no more cases of Covid-19 in the territory. However, policy decisions should be made on the basis of data, not wishful thinking. As testing continues, leaders should plan for the worst, assuming that more cases will come to light so that they can avoid making decisions on the fly.

The road ahead is long, but careful planning, mass testing, community collaboration and enlightened leadership can greatly reduce the negative effects of the pandemic in the territory.