With waves crashing against the rocks, community members dressed all in white tossed bouquets of pink and yellow flowers into the sea on Feb. 13 to memorialise victims of the …

END_OF_DOCUMENT_TOKEN_TO_BE_REPLACED 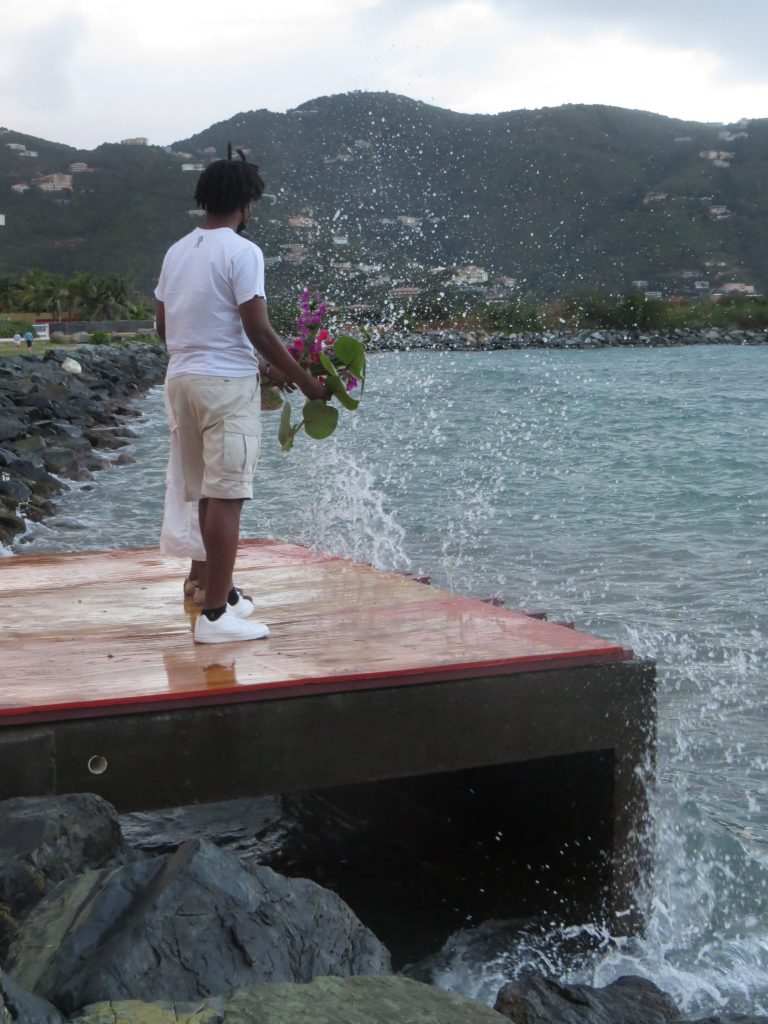 Community members faced the ocean on Sunday by Crafts Alive Village to cast bouquets into the water in honour of those who died because of the trans-Atlantic slave trade. (Photo: DANA KAMPA)

With waves crashing against the rocks, community members dressed all in white tossed bouquets of pink and yellow flowers into the sea on Feb. 13 to memorialise victims of the trans-Atlantic slave trade.

The 14th annual remembrance ceremony, hosted by the Afrikan Studies Klub, took place at the Crafts Alive Village and featured poets, musicians, dancers and historians who commemorated the people who died along the Middle Passage and the foreparents who survived.

Drizzly weather only brought attendees closer as they listened to keynote speaker Dr. Patricia Turnbull’s stories about growing up in a Eurocentric education system, which sparked a lifelong passion for questioning the status quo.

Dr. Turnbull said it wasn’t always easy pushing such boundaries as a student, a teacher, and eventually a community leader. But she’s always viewed education as the “practice of freedom” that should change with the times.

“Confronting the distortion and erasure of indigenous black culture is difficult work, but it must be done,” she said.

Taking actions like the inclusion of more Virgin Islands and Caribbean history in school curriculums is part of that work, but she said re-education must go beyond the classroom.

“As a club, we feel it is our responsibility not only to educate our community, but to help push our community to really embrace a more Afrocentric way of thinking,” he said.

He encouraged community members to keep speaking truth to power, even when change can take a long time. He said government leaders would be enlisting the help of ASK and other organisations to contribute to proposed curriculum changes in the future.

“We, as a people, generally have not made monuments or statues sufficiently to memorialise the significant events that took place in our historical story,” Mr. Christopher said. “So easily, we seem to forget or try to move past. But there is a grave importance in us remembering. We are here to remember, to remember, to remember. We are reconnecting with our past and our heritage.”

Ms. Louis spoke about the collaborative research carried out by her, Dr. Turnbull and Culture Director Dr. Katherine Smith into historical documents to learn more about the ships that brought enslaved people to the Caribbean, and how their families eventually built communities that formed the VI of today.

“We continue to uncover more about the lives of our ancestors, what they suffered through, and the fighting spirit of those who were freedom warriors — and the legacy which they left behind,” Ms. Louis said.

Ships carried approximately 10 to 12 million enslaved people to the Caribbean region, she said, though she added that it is difficult to trace the exact figures given the number of people who died aboard the ships, who were quickly sold and sent to neighbouring locations, or who died within a few years of arriving.

She said logbooks documented 69 trans-Atlantic voyages directly to Tortola beginning in 1748. They originated from areas including West Central Africa, the Gulf of Guinea, Calabar, Sierra Leone, the Congo River, the Windward Coast, Gambia and more.

Looking at one example, the ship Neptune left West Central Africa in 1784 with 328 people, but only 300 arrived.

Maps from 1798 show that 104 estates existed in the VI at the time. Though enslaved passengers were stripped of their names upon arrival, some of their new surnames can at least be traced to modern generations from slave registers, she said.

“This year and every year, we remember those of the past and know their names,” Ms. Louis said. “Today, we salute you, we remember you, and we thank you.”

Poets including Zulu expressed their thoughts about personally processing this history with their art. One poem he shared described the difficulty of wanting to “just be a poet” but still searching for a sense of identity.

A four-member dance team led by Gaia also performed to “Wade in the Water.”

The ceremony concluded with attendees making their way to a boardwalk overlooking Road Harbour and singing “Lift Every Voice and Sing.”

The wreaths they tossed contended with strong winds and the ocean’s spray to land in Road Harbour.