Only a few species of snakes are native to the Virgin Islands, and none of them are venomous or otherwise dangerous. But a rather unusual reptile — an eight-foot-long boa …

END_OF_DOCUMENT_TOKEN_TO_BE_REPLACED 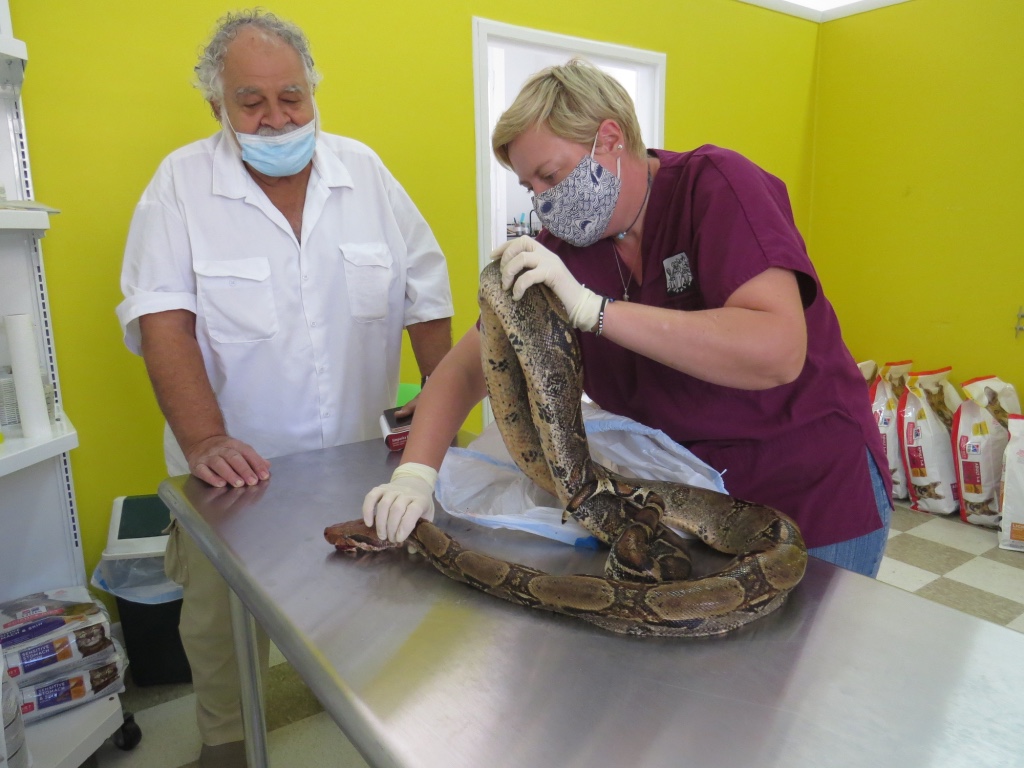 Biologist Clive Petrovic, left, and staff at Canines, Cats & Critters examine a boa found on Tortola last week that measured eight feet long. Since the snake appeared to be underweight, they speculated that it was possibly an escaped pet with limited knowledge of how to fend for itself. (Photo: DANA KAMPA)

Only a few species of snakes are native to the Virgin Islands, and none of them are venomous or otherwise dangerous.

But a rather unusual reptile — an eight-foot-long boa constrictor with large brown spots — turned up in the territory last week, prompting experts to ask how it arrived here and whether biosecurity measures might need to be re-examined.

Biologist Clive Petrovic, an environmental specialist with the Recovery and Development Agency, said the deceased snake is a non-native red-tailed boa, and he hoped to get its DNA tested at a willing museum or university. 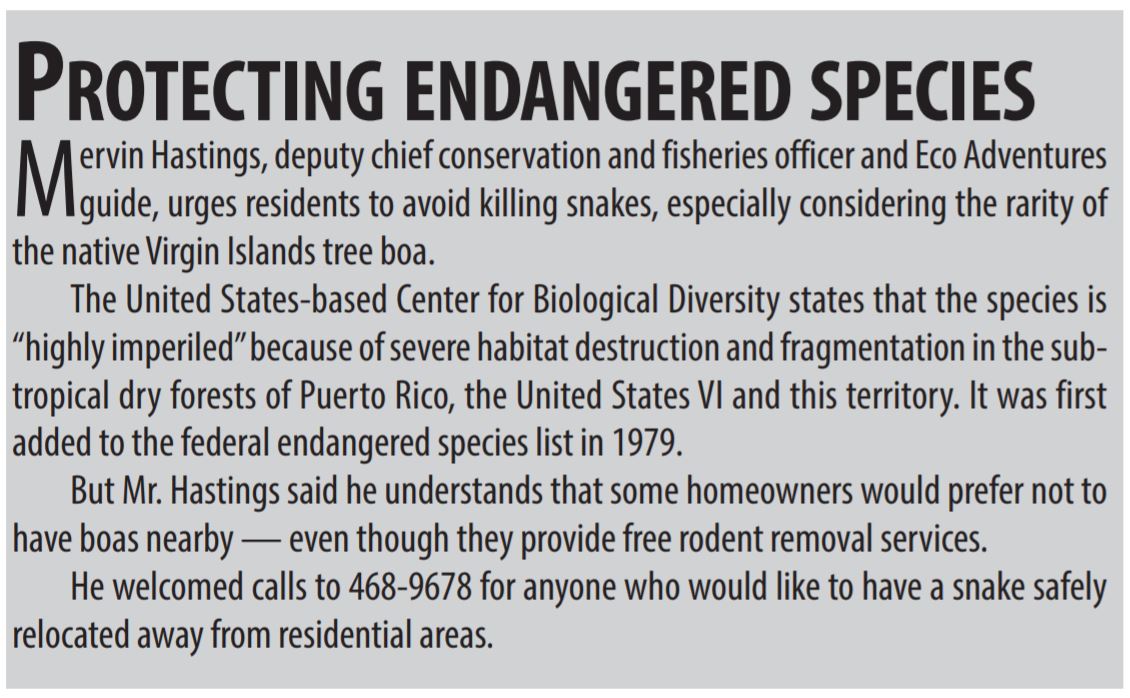 “They might be able to tell whether or not it came from a captive breeding stock … because a lot of zoos, for example, will barcode them with information on genetics,” he said.

The snake was found in the Bellevue area and subsequently killed.

Mr. Petrovic and staff at Canines, Cats & Critters, where he took the specimen to be examined and stored, thought there was a good chance the snake was an escaped pet that had struggled to fend for itself in the wild.

The red-tailed boa, he noted, is very popular in the pet trade.

Even though it measured eight feet in length, he said it appeared underweight for its size at about 14 pounds, with its spine noticeably protruding. He said this theory was supported when an autopsy found few fat deposits.

Mervin Hastings, deputy chief conservation and fisheries officer and Eco Adventures guide, said it was surprising to see a constrictor of this size in the territory.

The species took a few days to determine, but the snake’s size and head shape made it clear that it wasn’t an example of the territory’s largest native snake, the endangered Virgin Islands tree boa. That boa only grows to a maximum four feet, and the mystery snake was twice that length.

“It’s quite easy to tell them apart,” he said. “The [VI] boas have almost like a jaguar pattern, and a triangular head.”

The snake found last week could have ended up loose for any number of reasons, he said. A pet owner could have accidentally or intentionally released it into the wild, or it could have inadvertently ended up in a large shipment of lumber or other material.

Either way, the snake may be an indication that stricter regulations are needed at the ports, Mr. Hastings said.

This isn’t a common occurrence. The last time Mr. Petrovic could recall seeing such a large snake in the territory was about seven years ago, and though it was captured alive, it was confiscated and later found dead on the road.

And just last month, he said he received a call concerning a foot-long gold-and-blue lizard spotted by Port Purcell that he suspected was part of the exotic pet trade, perhaps a type of agama.

“These are established in Florida. They’re popular because they’re very pretty,” he said, showing a picture someone took of the lizard — but he noted that they are not native to the territory.

Besides the VI tree boa, the territory is home to a few other species of small snakes, including the Puerto Rican racer and the blind snake. Mr. Petrovic said one of the main concerns with non-native species is the potential for them to outcompete native animals.

He encouraged any owners of large snakes to make sure they are properly secured and treated well.

“There’s nothing wrong with pet snakes, but when you have a big animal like that, not doing the right thing can have consequences,” Mr. Petrovic said.

However, large snakes aren’t necessarily the biggest concern, especially when limited numbers make it unlikely for a breeding population to establish itself, he added.

Especially on an island that deals with a sizable import industry, the more significant risk of catastrophic invasion comes from hard-to-detect insects like the agave snout weevil, according to the biologist.

Mr. Petrovic said gaining a better understanding of the territory’s biosecurity challenges will be key to protecting the long-term health of its ecosystems.

Mr. Hastings noted that the Department of Agriculture and Fisheries is working on a comprehensive legislation review, and he said it should include new biosecurity measures, like dedicated agriculture officers monitoring the ports.