Two days after the Feb. 25 general election, a team of international observers released a preliminary report with a series of recommendations for election reform. Most of them are not …

END_OF_DOCUMENT_TOKEN_TO_BE_REPLACED 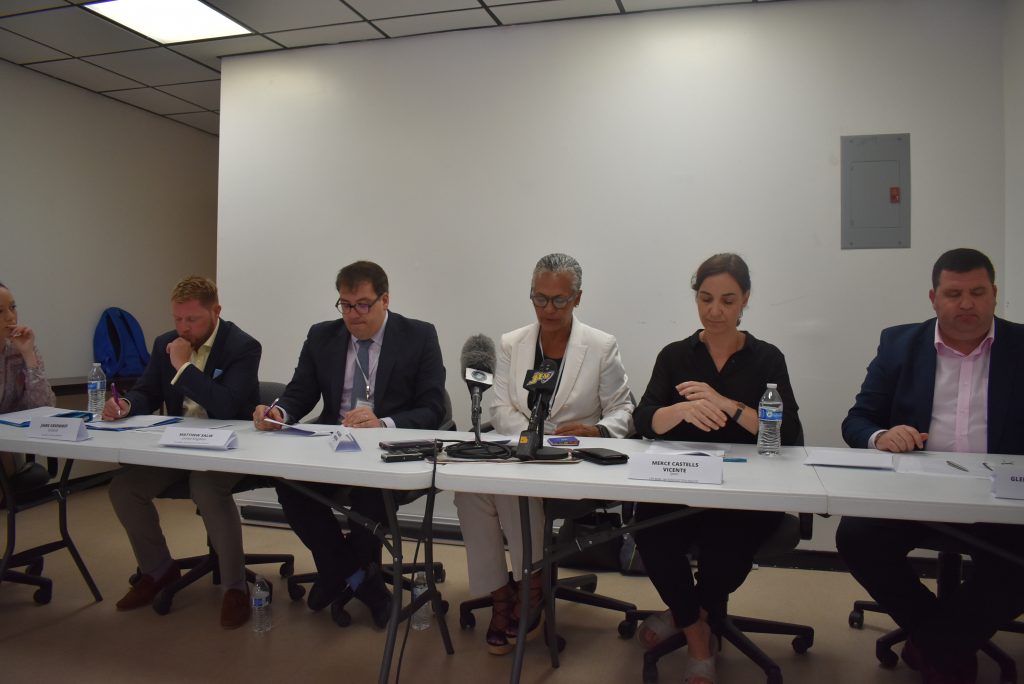 The election observers from the Commonwealth Parliamentary Association British Islands and Mediterranean Region released a preliminary report at a press conference on Feb. 27. The final published report calls for a raft of reforms to be enacted at least a year before the next election. (Photo: GENEVIEVE GLATSKY)

Two days after the Feb. 25 general election, a team of international observers released a preliminary report with a series of recommendations for election reform.

Most of them are not new.

In fact, recommendations such as campaign finance reform, fixed-term elections and an effective code of conduct have been put forth repeatedly for more than a decade by observers and the Office of the Supervisor of Elections.

The 2015 report from the team sent by the Commonwealth Parliamentary Association British Islands and Mediterranean Region went even further than this year’s preliminary report in emphasising the importance of limiting and publicising campaign donations so as to level the playing field for smaller parties.

“Many people with whom the mission spoke regarding campaign finance stated that citizens are not aware of how much candidates or parties receive in donations, who the donors are, how the money is spent, and generally find the entire process frustratingly opaque,” read the 2015 report.

This year’s preliminary report added that without “adequate legislation” the Virgin Islands is non-compliant with the United Nations Convention Against Corruption, which was extended to the territory in 2006.

A team of Caricom election observers made similar remarks in 2011, and the supervisor of elections has called for campaign finance reform at least as far back as 2007.

This year’s observers explained that a lack of financial accountability can undermine voter trust, and they detailed rumours of vote buying and corruption.

Observer Matthew Salik, an election analyst and the deputy head of international partnerships for CPA UK, emphasised at a press conference on Feb.27 that the distrust in the electoral process among the populace is partly due to the lack of campaign finance legislation.

“That breeds a sort of a suspicion about whether people are being manipulated or encouraged to vote in a way that they may not choose to,” he said.

Observer Jamie Greene, a Scottish Parliament member, stressed that there was no evidence of manipulation or corruption of the VI election, but explained that the mere perception of distrust was cause for concern.

“The reason we make the point in our opening statement is it is a perception of distrust,” he said. “It doesn’t necessarily mean there was any evidence, but if that’s what people are saying we have to reflect those views.”

The VI has implemented some of the recommendations made in the past, in particular by reforming the voting and counting procedures, which the 2015 CPA BIMR report called “cumbersome” and “labourious.”

The legislature also put in place a code of conduct, something that election observers and the elections supervisor have long recommended in order to address heated language and personal attacks during campaigning.

This year’s preliminary report praised the territory’s electronic voting and code of conduct as “positive steps” but
added that the code fails to identify how violations can be reported or policed.

The work of election officials in administering an election with only two months notice was praised in the document, which also criticised the short amount of time between announcement and delivery as threatening public trust in the process.

It repeated calls from the 2015 report to implement fixed-term elections and to form an independent election commission to oversee the elections office.

This year’s observers were more emphatic than those in 2015 in their critique of the territory’s belongership system.

Whereas the CPA BIMR’s 2015 report mentioned a “lack of clarity” over how to achieve belonger status, this year’s report stated that the system of belongership is “overly restrictive” and challenges the principle of universal suffrage.

Because belonger status is acquired by descent and not by birth or citizenship, it results in a system in which some “citizens” do not have the right to vote and yet “non-citizens” abroad can retain it, Merce Castells, an election observer from Spain, said at the press conference.

“This contravenes the International Covenant on Civil and Political Rights, which seeks to ensure all individuals within its territory have the right to vote and stand as a candidate without distinction of any kind such as national or social origin, property, birth or other status,” the report states.

The group addressed several concerns about voting and registration procedures this year, including a sharp spike in the number of voters registered in districts Five and Eight.

This increase, the report stated, raised suspicions that residents may have registered in a district other than the one of their declared residence in order to influence the election.

Felicity Herrmann, an election analyst from Germany and a programme officer for CPA UK, also mentioned the inconsistency in allowing agents and friends to accompany supported voters into the polling booth on Advance Polling Day.

She said she noted up to four people in one booth for a voter who requested assistance, which could undermine the secrecy of the voting process.

This reporter asked about accounts that a candidate interfered with the use of the emergency ballot bin, instead forcing voters to wait for a replacement voting machine to arrive at the Third District station on Advance Polling Day.

“We visited that polling station and we noted that there were some voters queuing for up to two and a half and three hours, and it’s something that’s going to be reflected in the final report,” said Ms. Castells, who did not directly confirm the account. “The machine was replaced in the end instead of using this other alternative way.”