Starting at 6 a.m. Monday, thousands of voters across the territory will head to the polls to cast their ballots in a much-anticipated general election that could dramatically shift the …

END_OF_DOCUMENT_TOKEN_TO_BE_REPLACED 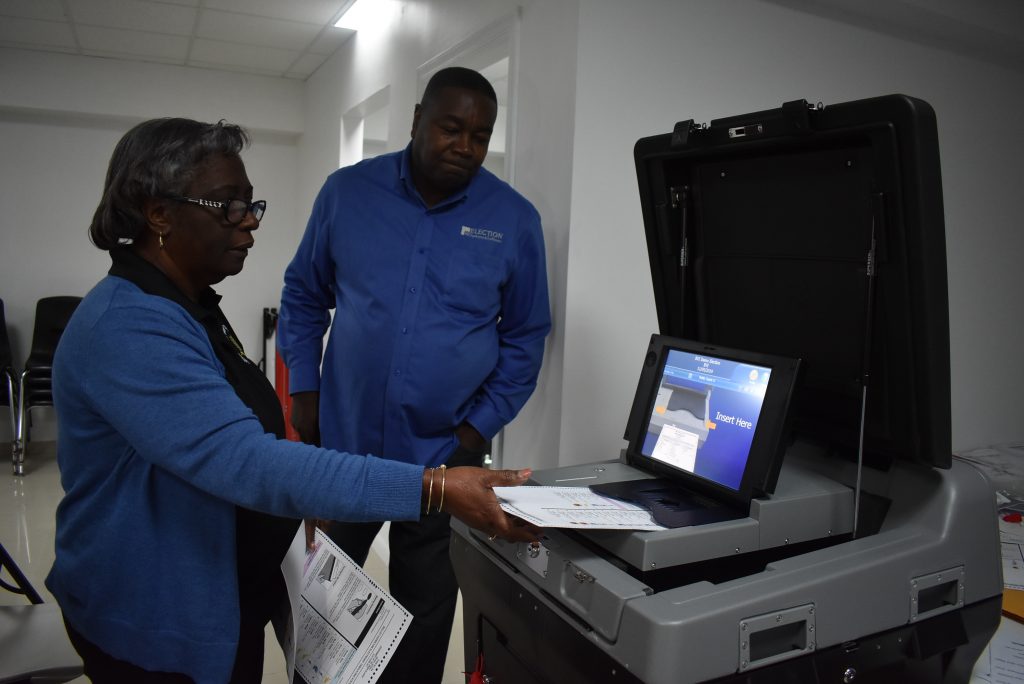 On Tuesday Elections Supervisor Juliette Penn demonstrates the new electronic voting machines, which will alert voters if they have made a mistake on a ballot. (Photo: GENEVIEVE GLATSKY)

Starting at 6 a.m. Monday, thousands of voters across the territory will head to the polls to cast their ballots in a much-anticipated general election that could dramatically
shift the political landscape for years to come.

And for the first time, they’ll probably know all the results before the end of the day.

New electronic vote-counting machines — which are designed to eliminate the need for the tedious hand counts that previously lasted through the night — mean that the winners will be announced as early as 9 p.m., according to Elections Supervisor Juliette Penn.

The stakes are high, as 39 party candidates and two independents vie to see who will lead the territory through a four-year term that will include directing the hurricane recovery and navigating various threats to the economy.

In recent days, the Office of the Supervisor of the Elections has held several events to make residents more comfortable with the new voting system in time for advance polling, which will be held today from 9 a.m. to 2 p.m. for the disabled, elderly, ill, police officers, election workers, prison inmates, and those who will be travelling on Election Day.

Regular polls on Monday will be open from 6 a.m. to 6 p.m. except for the Anegada polling station, which will close at 5 p.m. Anyone who shows up before a polling station closes will be allowed to vote, even after the closing time, election officials have said.

Recent outreach events included demonstrations of the machines for candidates and the press this week.

On Tuesday, Election Headquarters was packed full of blue, red and green shirts as candidates observed a presentation of the DS200 Precinct Scanner & Tabulator.

Willie Wesley, the director of business development for Election Systems & Software, who is overseeing the operation of the voting machines in the VI, explained to a room full of candidates how the machines work.

One woman asked how voters who can’t read would be able to vote. He responded that anyone who is illiterate or visually impaired should ask a poll worker for assistance.

Ms. Penn, the elections supervisor, said that instead of checking a box, voters will fill in a small circle on the form next to each candidate’s name to choose one district representative and up to four at-large representatives.

Mr. Wesley said he has held more than 30 trainings in the past two weeks to make sure poll workers can properly instruct voters on filling out the form correctly.

Any error will prompt the machine to “query” the voter, meaning it gives the option of taking back the ballot and correcting the mistake.

“The machine is designed to interface with the voter,” Mr. Wesley said.

After sliding the paper in the machine the voter will be alerted if they have undervoted or over-voted and offered the option of correcting the ballot or submitting it as is.

Voters are permitted to under-vote, but any ballots with more than the allotted candidates will not be counted.

“The concept is to empower the voter to make their own choices,” Mr. Wesley explained.

Once a correctly completed form has been submitted, voters will hear the “happy thud” of the ballot hitting the bottom of the machine, and the message “thank you for voting” will flash on the screen.

There will be at least six poll workers at each station, with two presiding officers and four poll clerks to help voters with the new system. Ms. Penn said she hopes this process will reduce the number of rejected ballots.

A machine tabulates the votes cast at each polling place, and will only show the results once all the voting is completed, at which point it will print out a paper tally of the final count.

Demoy Chinnery, a Third District resident, said he was glad to hear about the new system.

“Every vote counts,” he said. “We’re in a technology era now. It’s easier and I guess better off.”

Mr. Chinnery said he discussed the new system in his class at H. Lavity Stoutt Community College, where some of the students felt it would make voting more efficient, but others expressed fears about hacking.

“I hope it goes well and no one cheats,” he said. “Based on everyone’s vote the community should become better.”

Another change to the voting procedure this year is the process of identification. Voters can show up at any polling station to vote for the candidates in their district, and swipe their official voter-identification card to register in the electronic poll book.

In previous elections, poll workers had to look up voters manually, and verify the voter through a phone call if they showed up at the wrong polling station.

While this is the first year voters are required to bring identification, Ms. Penn has said previously that those who show up without it will still be able to vote.

Candidates formally submitted their names to the Office of the Supervisor of Elections last Thursday, with politicians expressing excitement at the culmination of the election process as they reflected on the campaign.

“It’s one of the moments I’ve been waiting for,” said National Democratic Party at-large candidate Trefor Grant. “It feels great.”

Mr. Grant went on to say people would be surprised how “long and taxing” campaigning is.

“You essentially give your life to the public from the day that you decide to run for politics,” he said. “It’s a trial, but it’s what you signed up for.”

Another newcomer, Fourth District Virgin Islands Party candidate Luce Hodge-Smith, thought back to this time last year when she submitted her retirement after 25 years in government.

“Going through this whole process, I’m not more nervous than I normally would have been,” she said. “I’m very comfortable, no matter what the results will be.”

There will be six election observers this year from the Commonwealth Parliamentary Association British Islands and Mediterranean Region monitoring election procedures from campaigning to tabulation to ensure that the processes meet international standards.

The Election Observation Mission has been monitoring the campaign via social media and local news outlets since late January, said Matthew Salik, the deputy head of international elections for CPA UK, who is from the United Kingdom and is one of the observers for this mission.

Felicity Herrmann, a programme officer for CPA UK from Germany, said the team hopes to visit as many polling stations as possible on election day, and will spend a minimum of 30 minutes at each location.

The group also includes the Head of Mission Pam Webster, a politician from Anguilla, and Merce Castells, another observer from Spain.

“We’re not here to police, we’re here to observe,” Mr. Salik said at a press conference on Tuesday.

After the election they will publish a report with their observations and recommendations.

Ms. Penn said that vote counting will start at 8 p.m., and if all the boxes are in she hopes to have the results by 9:30 p.m. if not before.

She added that the process might take longer if candidates want to compare the vote tally on the machine’s thumb drive with the one on the paper printout.

Yesterday, Second District resident Dorca Vanterpool said Monday will be her first time voting in an election since she moved to the VI from the Dominican Republic five years ago. She is eligible to vote because her grandfather is from Anegada.

Ms. Vanterpool said elections here are more organised, with fewer people in the streets, than elections back home. She added that she feels optimistic about the new voting system.

“Technology is going to change the world,” she said. “It’s positive.”