Within the first two lines of the territorial song — “out of the huts of history’s pain, our ancestors bled and died” — lie a commemoration, one that was celebrated …

END_OF_DOCUMENT_TOKEN_TO_BE_REPLACED 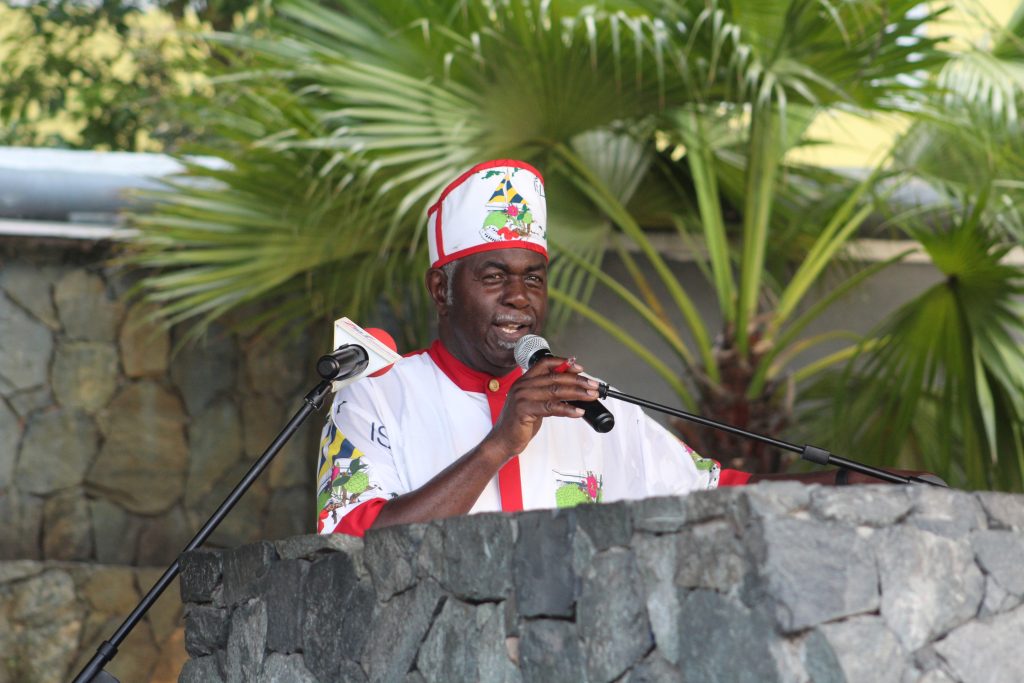 Within the first two lines of the territorial song — “out of the huts of history’s pain, our ancestors bled and died” — lie a commemoration, one that was celebrated on Sunday during the annual emancipation service led by Reverend Dr. Melvin A. Turnbull.

“As we celebrate our emancipation on this 31st day of July 2022, I suggest we might be doing so with mixed emotions,” he said. “On one hand we are glad to be alive, on the other hand, we mourn for our fallen brothers and sisters.”

At least two dozen people gathered at the Sunday morning well where the service was held on Sunday at 4 p.m. following a solemn march from the Old Government House.

Those gathered for the service began the day with the song “Lift Every Voice and Sing,” followed by an invocation by lay preacher Rosemarie Flax and opening remarks by Dr. Turnbull.

Dr. Turnbull encouraged the congregation to not get lost in the African diaspora and to remember that they share a common legacy and a “common enemy.”

“Your enemy is not people. They are just the conduits, the tools, the puppet, in which the enemy acts,” he said. “I plead with us as a people of the Virgin Islands to stop fighting with each other. Let us come together.”

Premier Dr. Natalio “Sowande” Wheatley spoke after, sharing a history of the emancipation march and service.

“August 1 marks 188 years since we have been a free people,” said Dr. Wheatley. “Since then, as a tradition and in remembrance of our legacy, we have been keeping and observing this time as one where we give all praise and thanks to God for his favour in granting our foreparents the desires of their heart, our freedom.”

He said that their sacrifice for emancipation shouldn’t be forgotten.

“We must reflect on the Trans-Atlantic slave trade as formally recognized to have taken place from 1526 to 1867 during which time over 12 million men, women and children were stolen from their homes,” he said.

He added that there have been enslaved people from Africa in the Virgin Islands as early as the 1600s, stating that it was a very “dark period” in the history of the territory.

“We observe emancipation because history must not forget what our foreparents went through and neither must we,” Dr. Wheatley said. “They struggled, determined to be free so that we, their progeny, can be free.”

Throughout the region, other countries and territories share similar histories, Dr. Wheatley said. Most of the islands had enslaved ancestors whose families were “broken up” by plantation owners, and when the economic model of slavery collapsed in these lands, the enslaved people found ways to survive by working with each other through trading and bartering, he said.

“We have examples we can relate to with our family in St. Thomas, St. John, St. Croix, the Turks and Caicos and so forth,” he said. “But I want us to recognise that this family circle is wider, much wider than we often perceive, and we have a lot in common with our brothers and sisters not just in our immediate vicinity, but further afield.”

Education, Culture, Youth Affairs and Sports Minister Sharie DeCastro said that the Virgin Islander identity was created by ancestors who were determined to secure their freedom.

“I am reminded that our annual emancipation festivities began with picnics, dances, horseracing and boat racing organised by members of the community,” she said. “Later on, the churches alternated the spearheading of the fete on the field, a family-oriented and faith-based event.”

The service closed off with a sermon by Reverend Dr. Bartholomew Orr of the Brown Missionary Baptist Church of Memphis, Tennessee, and the singing of the song “We Shall Overcome.”