Forty years ago last month, the Virgin Islands took a major step toward financial freedom when, with a $1.3 million budget surplus, the government ended its reliance on grant-in-aid from …

END_OF_DOCUMENT_TOKEN_TO_BE_REPLACED 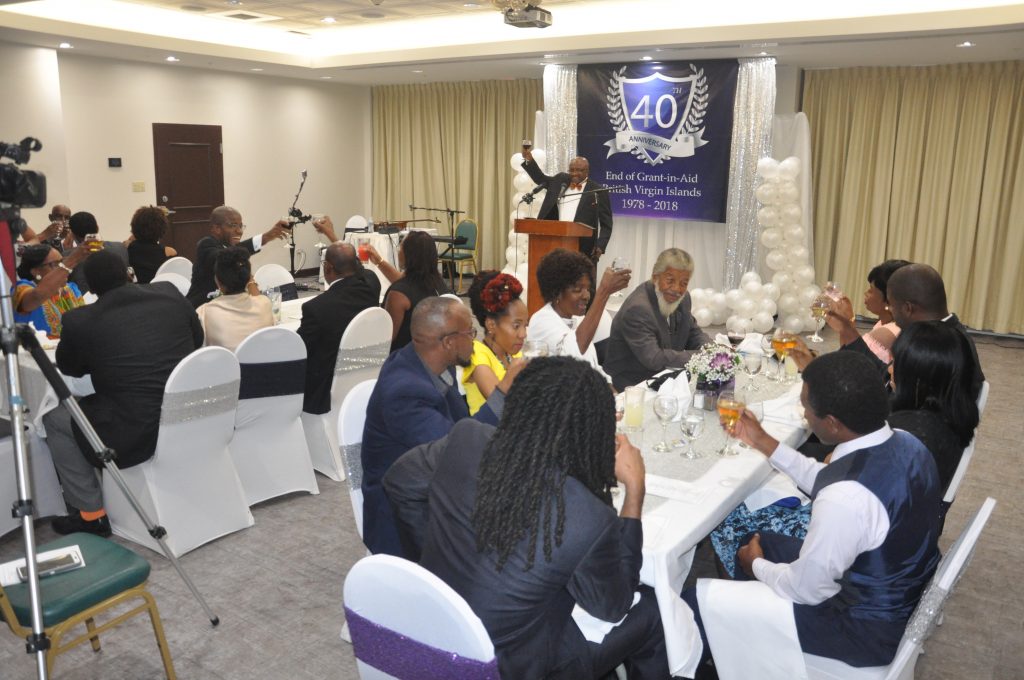 Dinner attendees toast the 1978 end of grant in aid from the United Kingdom. (Photo: FREEMAN ROGERS)

Forty years ago last month, the Virgin Islands took a major step toward financial freedom when, with a $1.3 million budget surplus, the government ended its reliance on grant-in-aid from the United Kingdom.

On Dec. 15 at Maria’s by the Sea, leaders gathered at a dinner to reflect on that milestone and what it means as the territory continues the journey toward greater self-determination.

“The end of grant-in-aid in 1978 was a significant achievement in the history of the BVI,” Benito Wheatley, chairman of the End of Grant-in-Aid Celebration Committee, said in his introduction. “Not simply because it ended the territory’s external dependence on the UK, but because it clearly demonstrated the ability of our people to manage our own financial affairs, and upheld the dignity of the Virgin Islands.”

Financial Secretary Glenroy Forbes detailed the territory’s struggles to raise revenue and balance its budget during a deep recession in the 1970s.

He pointed out that grant-in-aid ceased in its original form around the time the VI presented its first balanced budget in 1977, and then its first operating surplus in 1978, under the leadership of then-chief minister Dr. Willard Wheatley.

“We should, however, never forget to be grateful to the UK for all its assistance over those lean and challenging years,” said Mr. Forbes.

Grant-in-aid, he said, “fulfilled a need we had at the time, but after that we needed to get out of it, and my father was very focused on that.”

He called the push to end the system “a hard fight.”

But, he added, his father “was determined, and he was the kind of person who said he saw a light at the end of the tunnel.”

As chief minister, Dr. Wheatley worked to reduce expenditures and explore different revenue avenues, such as tourism, according to his son.

“Diversification of the economy is what he was stressing,” he said. “Slowly but surely, we stopped reducing the dependency on grant-in-aid.”

Deputy Premier Dr. Kedrick Pickering, who had recently returned from representing the overseas territories at the COP 24 climate-change conference in Poland, called the end of grant-in-aid one of the “key pillars of self-determination” in the territory.

He suggested the anniversary presented a time to “be creative” on solutions to continue Dr. Wheatley’s legacy and further diversify the economy.

The Saturday dinner was organised by a committee and funded by private donations, according to Mr. Wheatley.

The chairman said he hopes that other events in VI history will be commemorated in a similar manner in the coming years.

Last year, he pointed out, also marked the 50th anniversary of the 1968 founding of the Positive Action Movement, and this year will be 60 years since the 1949 march that led to the restoration of the Legislative Council in 1950.