The foundation has been laid for the brand-new Enis Adams Primary School in Meyers Estate, and there’s a little something extra in the ground underneath it: coins, courtesy of donor …

END_OF_DOCUMENT_TOKEN_TO_BE_REPLACED 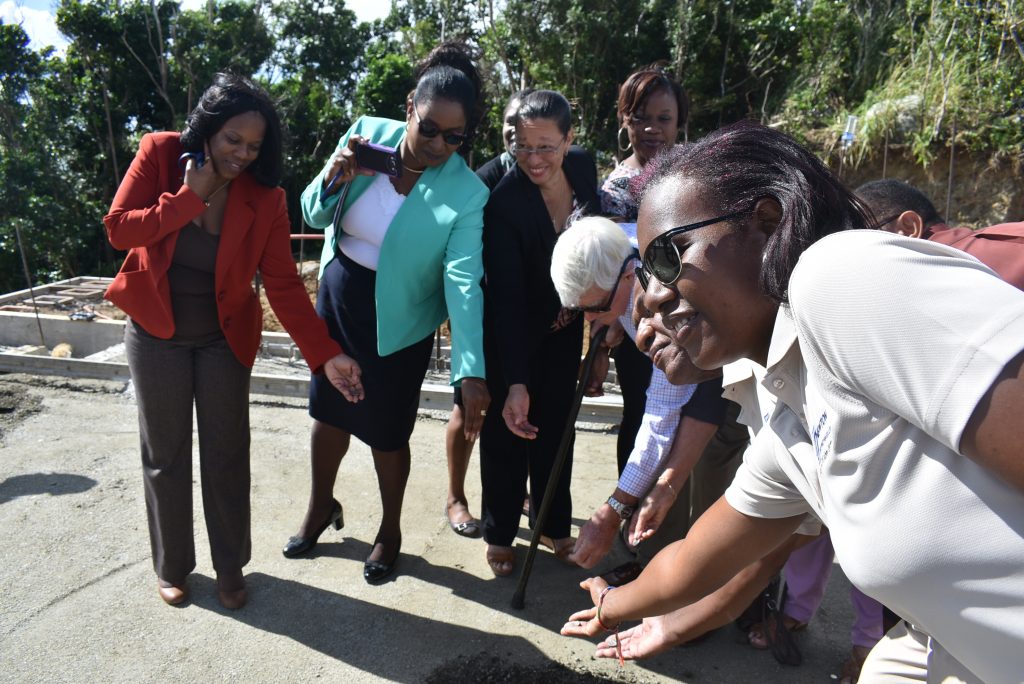 Peter Haycraft, founder of Road Town Wholesale, and officials from the Ministry of Education and Culture toss coins into the foundation of the Enis Adams primarySchool, which is under construction. (Photo: CLAIRE SHEFCHIK)

The foundation has been laid for the brand-new Enis Adams Primary School in Meyers Estate, and there’s a little something extra in the ground underneath it: coins, courtesy of donor Peter Haycraft,founder of Road Town Wholesale, and officials from the Ministry of Education and Culture.

“I wanted to do a coin ceremony, which is something I learned from my dad,” said purchasing manager Amorrell Newton, who works with her father, Hesketh Newton, the project manager and CEO of Newton Construction Company. “It signifies a milestone and also to encourage good vibes, good blessings and so forth, and minimise delays.”

During a progress meeting on Monday,Mr.Newton said the company is aiming toward a June completion date. Groundbreaking for the school,which was destroyed in Hurricane Irma,was in February. Mr. Haycraft has pledged more than $1 million, and assured attendees that “financing is guaranteed, right through to the last brick, no matter what it costs.”
On Friday, he joked, “I hope to get a full invoice before Christmas.”

Heavy equipment was operating behind Mr. Newton as he explained that besides the ground-floor slabs,they have defined the courtyard area and all the foundations,including laying the groundwork for the 10,000- gallon cisterns and two large rooms for utilities and storage. White pipes sticking up from many of the classrooms represent the water and electrical works that will be fully installed once all foundations are poured.

As officials gathered under a tent on Friday, they gazed around at nearly 60 tonnes of blue and grey steel, the contents of two containers that have already been sent from the United Kingdom. Four more are expected. “You can imagine the quantity of steel we have on site,” Mr. Newton said. Come Jan. 7, the steel will be used to erect the walls of the school. Work will continue until Dec. 21, at which point workers will take a Christmas break,Mr.Newton said.

School community
During the February groundbreaking, Education and Culture Minister Myron Walwyn described what the campus will look like, saying that it will include seven classrooms, two lecture halls, a computer lab, a science lab, an auditorium and more. The school will have upgraded features, including Smart Boards, solar panels, wheelchair access and infrastructure that can withstand 185-mile-per-hour winds and magnitude four earthquakes,the minister said.

On Friday, architect Ashton McCall said the ground floor of the building was designed with the whole school in mind, including classrooms and the principal’s office. The second floor will contain specialised facilities such as science labs, computer labs, a kitchenette and an audio lab. “I don’t know how many schools have an onsite library, but we are trying to put one in this building,”he said.“I know everything is on digital media now but we can’t do without books.”

The central courtyard is two storeys with a vented roof, eliminating the need to use air conditioning constantly. “It has vents at the roof level, so that way the building is designed for natural ventilation,”he said.“It’s very breezy.”

Since Irma,Enis Adams Principal Rhonda Smith has been assigned to Francis Lettsome Primary School in East End,while her former students attend Althea Scatliffe Primary in Road Town. She has taken it upon herself to inform her former students and staff about the progress of their building. “It might be somewhat of a transition for them,” she added, pointing out they have been attending ASPS for nearly a year. “They’re excited. … They didn’t want to be separated from this school.”