Embracing the theme of “Three years, three obstacles, one mission,” the Elmore Stoutt High School held its first-ever drive-in graduation ceremony last Thursday, which was broadcast live through the government’s …

END_OF_DOCUMENT_TOKEN_TO_BE_REPLACED 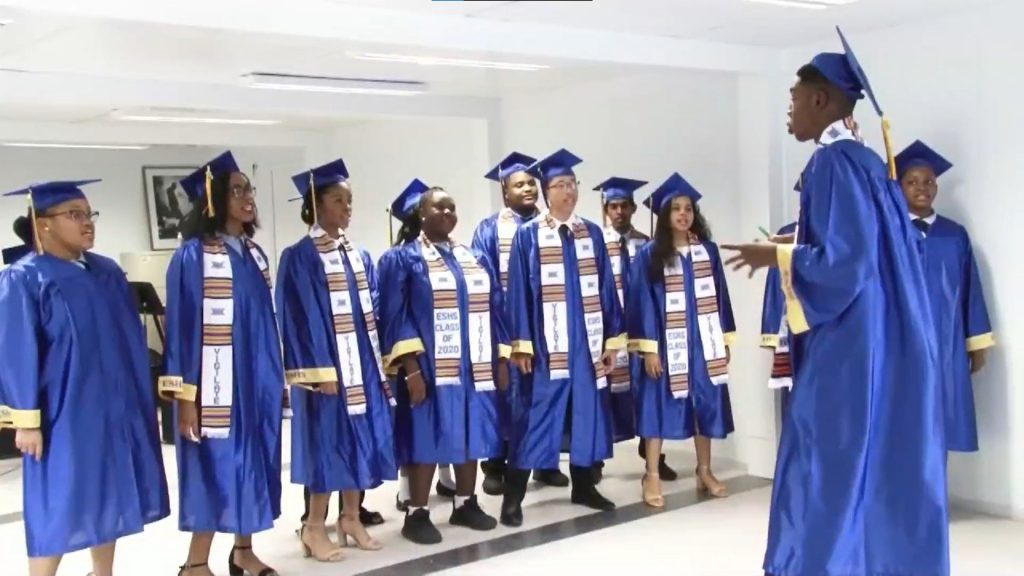 Students were allowed to collect their diplomas, but visitors waited nearby in their cars, watching the broadcasted ceremony on a screen as acting Chief Education Officer Connie George presented the Class of 2020.

In the valedictory address during the ceremony, top graduate Alexia Penn said she was saddened not to see her peers’ smiles and tears as they look back together on their years at ESHS.

“However, throughout our entire experience, we have never been without hope,” Ms. Penn said. “Through the struggles, we have been blessed.”

Of the 127 graduates from the high school, 72 received made honours, and 13 received high honours for their scholastic achievements. Among the senior class, 20 obtained college credit for English and mathematics; and for the first time, 10 students received early admission to H. Lavity Stoutt Community College.

In her address, valedictorian Chadina Wheatley described the class’s struggle with the Covid-19 pandemic, which she said “tried to get the best of us” and failed.

“Despite all the odds lined up against us, we made it,” she said, drawing loud cheers from her classmates.

She also offered motivational words for her fellow graduates.

“It is often said that success is a journey, not a destination,” she said. “Success is determined by our daily choices.”

The BVI Seventh-day Adventist School rounded out the 2020 high school graduation season on Sunday. As in other ceremonies this year, the graduates were allowed to attend the event, but most spectators were asked to watch online.

Chair Jeremiah Frett extended his congratulations to students he said had found an “alternate route” to graduation given the circumstances of the pandemic.

“Graduates, remain laser focused, and always remember the strong spiritual foundation provided at this school, home and church as you move into the next chapter of your lives,” Mr. Frett said.

The graduating class included 36 students. In her speech, valedictorian Kayla Manning recounted a fable about a donkey that fell in a well and escaped by constantly shaking off the dirt meant to bury it and stepping up.

“In life, there will be times when we feel like a donkey stuck in a well,” she said, adding, “However, fear not, because God is with you.”

Salutatorian Lia Claxton said, “It was not all smooth sailing. However, we were not alone. Along the way, we built strong lifelong relationships with our peers, who helped us to overcome whatever battles we faced.”