This year’s Financial Services Week, which wrapped up on Friday, featured the theme “Top of the List: Celebrating Longevity, Ingenuity, Substance and Transparency,” and highlighted the contributions of an industry …

END_OF_DOCUMENT_TOKEN_TO_BE_REPLACED 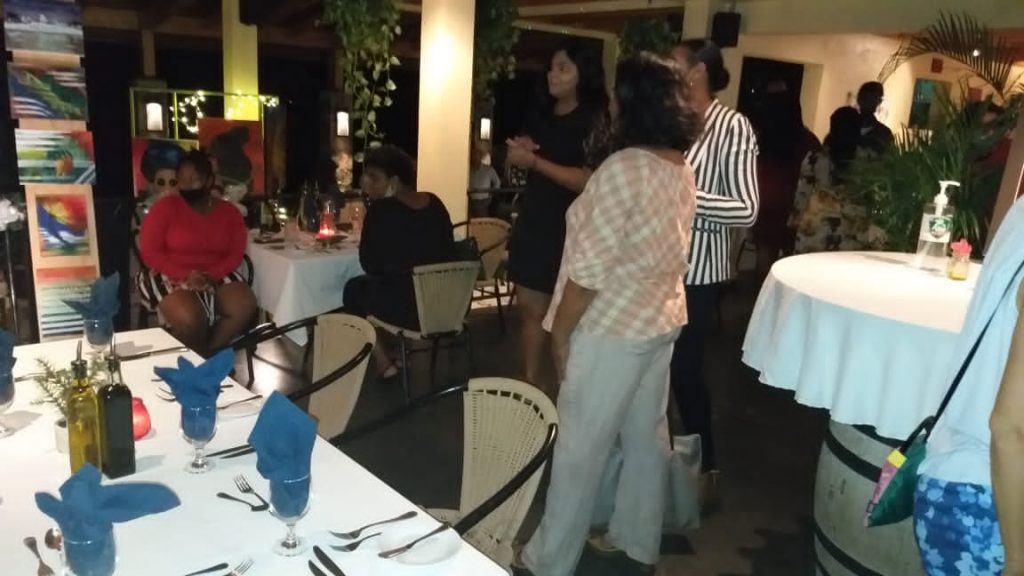 Work by young artists from Jost Van Dyke was on display Friday at Brandywine Bay during the “FinArt” showcase, the final event of Financial Services Week. (Photo: PROVIDED)

This year’s Financial Services Week, which wrapped up on Friday, featured the theme “Top of the List: Celebrating Longevity, Ingenuity, Substance and Transparency,” and highlighted the contributions of an industry that accounts for half of government revenue but whose impacts often fly under the
radar for many residents.

More than 2,200 people are directly employed in financial services and another 3,000 jobs are supported indirectly by it, according to a video shown during the virtual opening presentation.

“They buy food, they buy swimsuits and shampoo, cars, power tools and plantains and fish and roti,” the video’s narrator stated. “Financial services
employees buy Painkillers and lots of beer. … Everyone needs a roof over their head and a  place to do business, so we own, rent or buy from local families for housing and office space, putting billions of dollars into the pockets of BVI families.”

In Premier Andrew Fahie’s opening remarks in the video, he highlighted the role the industry has played in keeping the territory’s economy afloat during the Covid-19 pandemic.

“The industry has been playing an even more important role in keeping our economy resilient,” he said, adding, “We are thankful that despite the current challenges, our industry has remained relatively buoyant.”

During a breakfast forum last week, BVI Finance CEO Elise Donovan joined Director of Tourism Clive McCoy to discuss how the circumstances of the year shaped the industry and challenged industry practitioners to adapt.

“Normally we spent a large part of our activities going to conferences and events, going across the world promoting products and services,” she said, adding that she and her colleagues recently met virtually with businesses in China with a backdrop of the Cyril B. Romney Tortola Pier Park. “So it has certainly pushed us into digital transformation and using more of the digital services to get our messages across, and to package what we are doing.”

She and Mr. McCoy agreed that there is a “synergy” between their industries that often goes underutilised, and suggested that the recently introduced
#BVILOVE campaign should be heeded by everyone to help tourism get back on the world’s radar.

“Everybody in the financial services industry is a brand ambassador for tourism,” she said.

“So everybody who’s walking around me where I am going to work [is] not just selling the financial services industry. I’m talking about the most beautiful
place in the world. So we are all brand ambassadors.”

Mr. McCoy added, “For many years, it seems as if we weren’t on the same page in terms of our marketing efforts. Now, we’ve had many discussions about joining together to do certain things. I know when I first was appointed we had a very long conversation about cleaning up the territory and putting on campaigns together to join both industries so that we’re not seen as separate.”

People who work or do business in the VI for years can’t help but develop an attachment to it, Ms. Donovan said.

“I think there’s a certain aspect of love that comes with that,” she added. “I remember going to a conference, and somebody bringing to me a picture that was 20 years old to show that, you know, they had been with a BVI premier, and that demonstrates to me an example of the kind of love that they have for the BVI.”

Last week also featured a heated rematch between the student debaters at H. Lavity Stoutt Community College and their industry opponents. The moot was timely as the VI ponders changes to both its economy and its political autonomy:

“The VI’s status as a British overseas territory has a positive impact on the BVI financial services: true or false?”

The opposition, led by associate Melissa Thomas of Harneys, claimed that increased regulatory demands from the UK, which keeps changing its goalposts, have become onerous.

“The BVI has had to bend over backwards to satisfy the policy interests of the UK by committing millions of dollars to the implementation of the Beneficial Ownership Secure Search System,” she argued.

“However, that still wasn’t good enough. … It is clear that the BVI’s interests and the UK interests are not aligned with an important issue in respect to the BVI financial services.”

However, the proposition, led by Nicklous Kanhai, contended that the VI’s OT status “has been a positive in that we were given time for the implementation of [BOSSs]. Had we been an independent country, this would be different. The
[European Union] will not hesitate to blacklist the BVI.”

Ultimately, the judges sided with the team representing the industry.

The week got started physically on Nov. 21 with a Fitness, Sweat, Workout Morning at the pier park with trainers from PULSE Fitness and choreographer Che Pemberton teaching about 150 participants a dance to the song “Jerusalema.”

“The only support that I need is the support that gives the kids what they need,” Mr. Chinnery said when asked how the finance industry can work harder to support art and artists. “Then we can create as much or whatever they would like to create.”