Wendell Gaskin, a former deputy financial secretary who represented the Finance Ministry on the BVI Ports Authority Board during the time of the troubled cruise pier project said that until …

END_OF_DOCUMENT_TOKEN_TO_BE_REPLACED 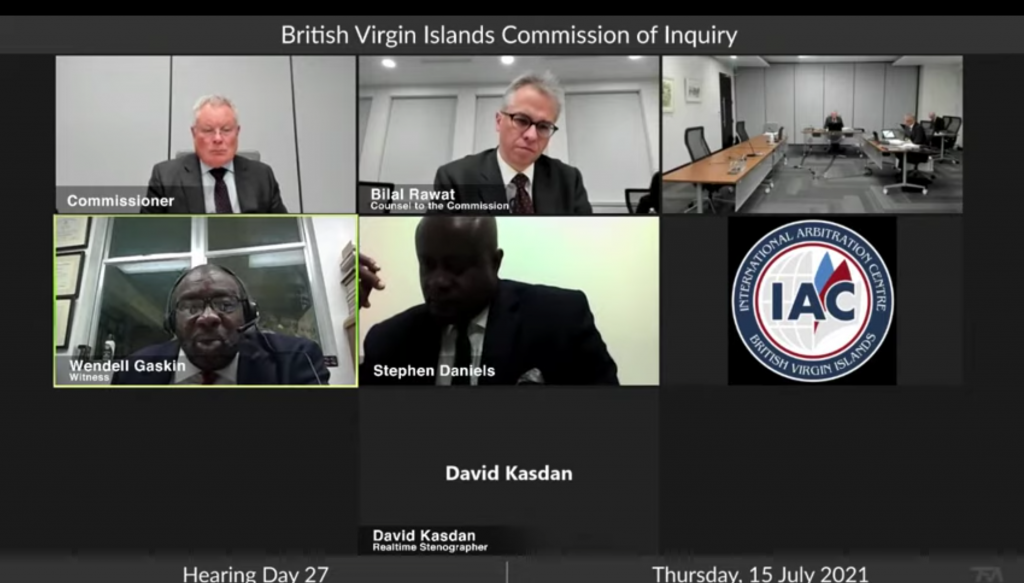 Former Deputy Financial Secretary Wendell Gaskin appeared before the Commission of Inquiry last Thursday to give testimony about his role in the cruise pier project, among other topics. (SCREENSHOT: COI/YOUTUBE)

Wendell Gaskin, a former deputy financial secretary who represented the Finance Ministry on the BVI Ports Authority Board during the time of the troubled cruise pier project said that until this month he had not seen a 2014  report from the auditor general criticising the project and his role in it.

Wendell Gaskin, who helped spearhead the Internal Audit Department while serving as deputy financial secretary from 2011 to 2018, was described in Auditor General Sonia Webster’s report as “uncooperative.”

Mr. Gaskin, however, disagreed with that characterisation when questioned last Thursday by the Commission  of Inquiry about his role in the cruise pier project as detailed in both the auditor general’s report and a separate 2014 report by the opposition-led Public Accounts Committee.

Mr. Gaskin told the commission that he had not seen either report until this month, though he did provide testimony while the PAC report was being completed.

COI Counsel Bilal Rawat said last Thursday that the PAC report states that Mr. Gaskin had said that he represented the financial secretary on the BVIPA board, and that he had attended approximately 90 percent of the board meetings during the time in question.

Last Thursday, Mr. Gaskin agreed with that account, but he disputed several other claims in the reports.

Mr. Rawat also read from a passage in the 2014 PAC report that  summarised Ms. Webster’s testimony to the committee.

“Mr. Gaskin’s demeanour was not welcoming to her staff and … he had instructed his staff at the Ministry of Finance that they should not give anything to the Office of the Auditor General unless it goes through him,” Mr. Rawat read. “She noted that he was aware that the deputy financial secretary was not fully cooperative with the audit being done
on the project.”

But Mr. Gaskin, echoing his responses to many of the commission’s questions, claimed he didn’t recall being uncooperative.

The counsel continued,  “Now, Mr. Gaskin, you’ve spoken of the passage of time and how that affects memory. Just to make it clear, despite that
passage of time, is it your position that you did cooperate with the auditor general?”

“It is my position that I — that the Ministry of Finance cooperated with the auditor general,” he replied.

Mr. Gaskin acknowledged the recommendation. However, after he retired from the ministry, he  told the COI, he went on to serve as a member of the BVIPA board and H. Lavity Stoutt Community College board of governors.

Asked whether he had been subjected to any disciplinary action, Mr. Gaskin replied, “Not that I’m aware of, sir.”

“Well, hopefully you, if you had been a subject to it, someone might have made you aware of it,” Mr. Rawat said.

Mr. Gaskin’s alleged lack of cooperation with the auditor general’s team came in spite of the fact of his firsthand knowledge of the challenges auditors must overcome to do their jobs.

He headed the previous Internal Audit Unit and then served as director of internal audits for some time, overlapping with his position as deputy financial secretary. He also described himself as “instrumental” in getting the Internal Audit Act passed in 2011.

But he called it a “lonely experience,” particularly in performing a 2011 audit on the House of Assembly assistance grants programme, for which his department produced a report making recommendations for improving transparency and accountability, which he said were not implemented.

He wrote a letter to then-Speaker of the House Roy Harrigan requesting an “overhaul” of the programme, but he never got a response, he said.

“Nobody liked having to deal with the auditors,” he  said. “Therefore, we recognised that our role wasn’t just to go around and hit people over the head with a big stick. Our role was to assess and to continue to assist, because once you build trust that is what you’re going to get.”

Mr. Rawat went on to question him about the allegations in both reports that the Ministry of Communications and Works — headed at the time
by then-minister and current opposition member Mark Vanterpool — “commandeered” the cruise pier project, which eventually saw cost overruns as high as $30 million.

Mr. Gaskin replied, “Commissioner, as I said to you before, the first time I’m seeing this document was the 2nd of July [2021]. I am not in a position to give a statement as to what the Ministry of Finance’s position would be at this time.”

Mr. Rawat pressed, “Are you saying that you didn’t, at that time, see a copy of the [PAC] report on which you were criticised?

He went on to insist that he was not aware that the report had been published or that it had been debated in the HOA, and he said he did not ask to see a copy of it.

Although the commission reminded him of the evidence he had given to the PAC, his responses suggested that his memory of the time was unclear.

“In 2014, when you appeared before the Public Accounts Committee, you made the point that you hadn’t seen the report at that time,” Mr.
Rawat said.

Mr. Rawat said that during Mr. Gaskin’s testimony to the PAC, he reportedly said the Ministry of Communications and Works had instructed the board to spend $3 million on piles for the cruise pier.

Mr. Gaskin responded that “it wouldn’t surprise” him if the  ministry had done so.

However, he said he had no recollection of the auditor general’s allegation that the MCW took over for the board and that the BVIPA was “reduced to endorsing decisions already made by the ministry.”

“All you can confirm is that, in 2014, you told the Public Accounts Committee that the ministry had not adhered to the Protocols [for Effective Financial Management] but you cannot now remember in what
way they had not adhered?” Mr. Rawat asked.

He added that he couldn’t  recall why only a two-week period was allowed for potential tenderers to make submissions  on such a complex, high-value project, describing the process as “above my pay grade.”
He also said he could not recall why the public tender invitation appeared to be based on a previously accepted proposal from Tortola Port Partners, with which the ministry had effectively already entered
into an agreement that subsequently was cancelled, according to the auditor general.

Mr. Rawat asked him to “confirm whether it’s right from what you said in 2014 that your evidence in 2014 was that when the financial secretary was not available to chair the Negotiation Committee, Claude Skelton-Cline would do so.”

Mr. Skelton-Cline was appointed managing director of the BVIPA from 2012 to 2015, though the report questions his qualifications for the role.

“Based on the information here, I would have to conclude that is what happened,” Mr. Gaskin said.

He added, however, that he could not recall why, after a year of assessment and negotiations, there was a failure to execute a contract, or why the project did not undergo an appraisal process before the procurement step.

He also did not recall whether he was aware at the time that there was a connection between the BVI Investment Club and the Tortola Port Partners. TPP was  awarded the contract in 2013, though the deal fell apart after the parties could not agree to financing terms.

Mr. Gaskin disagreed with the PAC assertion that the ministry hired too many consultants for the project, including Baker McKenzie as lawyers specialising in public-private partnerships, PricewaterhouseCoopers
as accountants, and BDO as accountants and auditors.

“I don’t look at it as a criticism,” he said. “I look at it [as] the Ministry of Finance was  acting prudently and making sure that we try to do whatever is required to make sure that all the people who were involved
had some knowledge about what they were doing.”

Mr. Gaskin claimed not to be aware of the auditor general’s findings of possible conflicts of interest among the various board members and others involved in the project who were serving in multiple capacities.