Former Premier Dr. Orlando Smith told the Commission of Inquiry on Tuesday that he didn’t instruct his financial secretary to “show me the evidence” that the BVI Airways deal was …

END_OF_DOCUMENT_TOKEN_TO_BE_REPLACED 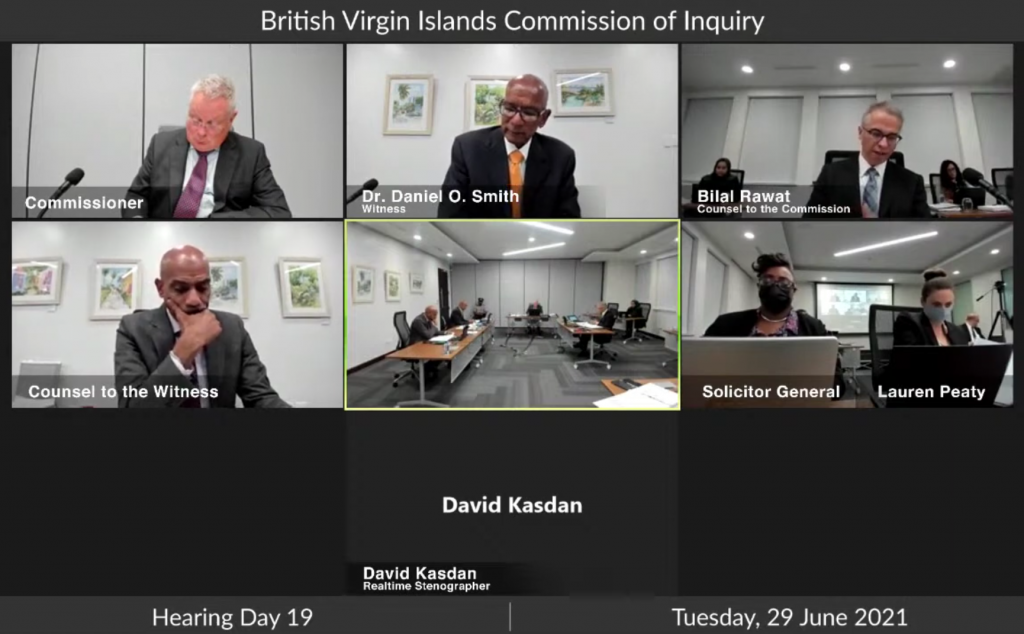 Former Premier Dr. Orlando Smith was grilled by the Commission of Inquiry on Tuesday about the failed $7.2 million BVI Airways deal. (SCREENSHOT: COI/YOUTUBE)

Former Premier Dr. Orlando Smith told the Commission of Inquiry on Tuesday that he didn’t instruct his financial secretary to “show me the evidence” that the BVI Airways deal was a justified use of $7 million of public money at the time he was making it.

Government signed the agreement with BVI Airways, Castleton Holdings and Colchester Aviation in December 2015, but after receiving $7.2 million from government, the airline failed to launch a commercial air service by its October 2016 deadline.

Government terminated the contract in November 2017 amid finger-pointing and public acrimony as residents called for answers about how the millions could have been spent with no flights to show for it. In January 2020, the Office of the Auditor General produced a blistering report suggesting that government officials disregarded Cabinet directives and experts’ warnings in order to forge ahead with the failed partnership.

In Tuesday’s hearings before the COI, Dr. Smith and his then-Financial Secretary Neil Smith, two of the major government architects behind the deal, answered questions about the report’s findings.

“You were satisfied from your financial secretary [that] the individuals who were the operator parties — which is [airline partner Bruce] Bradley,
[BVI Airways President Jerry] Willoughby and [Colchester Chairman Scott] Weisman — were capable of running an airline that flies people from the BVI to Miami and back?” COI Counsel Bilal Rawat asked Dr.
Smith. “Or did you say, ‘Well, show me the report. Show me some evidence’?”

Mr. Rawat then asked Dr. Smith whether he was aware the attorney general at the time had raised concerns about the agreement, as detailed in the auditor general’s report.

The former premier said he was aware of those concerns, but
that he ultimately chose to take the advice of Lester Hyman, the United States legal counsel to the VI for about 30 years who helped broker the deal, and who Dr. Smith told the COI he considered “a friend.”

Mr. Hyman is now being sued in US court by the VI government for at least $11 million in damages related to the deal.

Mr. Rawat observed, “What seems to have happened in this case is that Mr. Hyman approached you in 2013. And the discussions then continued, and the government at no point stepped out of those discussions and said, ‘Let’s go and talk to  somebody else and see if they can do us a better deal,’” Mr. Rawat said.

Dr. Smith said prior to Mr. Hyman’s approach in 2013, he had spoken to other airlines but they were not interested in taking on the route. Mr. Rawat pressed: “But my question is directed to how $7 million of public money ended up going in one direction, and you didn’t actually get the service that you contracted for? Because that was the outcome, wasn’t it?”

But Mr. Rawat stressed that from 2013, when Mr. Hyman proposed the deal, government “did not at any point after that go and speak to any other airlines about taking the route.” He also asked Dr. Smith if officials said, “‘We have three men who’ve appeared on the horizon and want to do this route: Let’s go and see if there’s anybody else who wants to take it on.’”

The counsel asked if he was concerned that government had agreed that it wouldn’t get its $7 million “investment” back until three milestones were reached, the third of which was that the airline received a 20 percent return on investment.

“Were you not concerned that in 2015 the government was entering into a position where it was carrying the risks whilst the operator parties were going to enjoy the profit?” asked Mr. Rawat.

Dr. Smith responded that he merely wanted air service between Miami and Beef Island, which he had been seeking for some time.

“And so once we got the service that we wanted, the cost would be justified,” he said.

Later, the COI asked Mr. Smith, the former financial secretary, whether he was aware that the attorney general had made objections and suggested amendments to the agreement the VI was considering.

Mr. Smith said he was aware of the AG’s concerns, but he consulted with Mr. Hyman as well on whether the venture was “commercially reasonable.”

He stated that Mr. Hyman was not necessarily “more persuasive” than the AG, but it “became a legal argument and in listening to not just the attorney general and not just to Mr. Hyman, but listening to other legal opinions and having discussions with other  practitioners around this, it was a distinction that eventually we felt that we could live with.”

Commissioner Sir Gary Hickinbottom chimed in: “I understand that there are legal arguments. But at the end of the day, it was a commercial risk to choose this or this.”

Mr. Rawat asked Mr. Smith if, as the financial secretary and the government’s official liaison for the project, he was able to inspect BVI Airways’ financial records.

“I felt that the fact that there were no existing concerns on these two main individuals, coupled with their perceived business acumen, was reason enough to pursue the deal with them” despite the fact that they had no experience running a commercial airline, he said.

According to the auditor’s report, in January 2017 Mr. Smith authorised the release of the remaining portions of the $7.2 million to BVI Airways — which was meant to be paid in installments — without the required approval from Cabinet, and before the airline had been approved to fly by US or UK authorities.

Even though government met its contractual obligation to pay the full $7 million, the partners also requested an immediate payment of an additional $200,000 to cover costs related to government’s earlier failure to secure a line of credit, as explained in the auditor’s report.

Dr. Smith told the COI he was aware of this and that “we did not get Cabinet authorisation at that time … but we did have discussions with members.”

He added that later on, he consulted Cabinet about employing asset recovery lawyer Martin Kenney in attempt to recoup the money.

However, Mr. Rawat pointed out that by that time, in 2019, government “had given all the money to BVI Airways and in fact BVI Airways had ground to a halt and ceased trading.”

Mr. Smith agreed that he did not have authorisation from Cabinet for the disbursement, but he said did have permission from Dr. Smith as minister of finance.

“The minister of finance has the constitutional and legal authority to make advance payments,” Mr. Smith said.

On Tuesday, Sir Gary noted that according to the report, in January 2017, after all $7.2 million had been paid, the operators started to ask for more money.

“You didn’t know what the state of BVI Airways was in financial terms, and they made it pretty clear that they wanted money from you, which suggests they haven’t got any,” he said.

Government terminated the deal later that year. In 2019, BVI Airways partners took the government to arbitration in an effort to get at least $10 million more than government had already paid them. In May, their claim failed.