The Miami trial of former Premier Andrew Fahie and his codefendants has been pushed to next January at their request. Mr. Fahie, former BVI Ports Authority Managing Director Oleanvine Maynard, …

END_OF_DOCUMENT_TOKEN_TO_BE_REPLACED 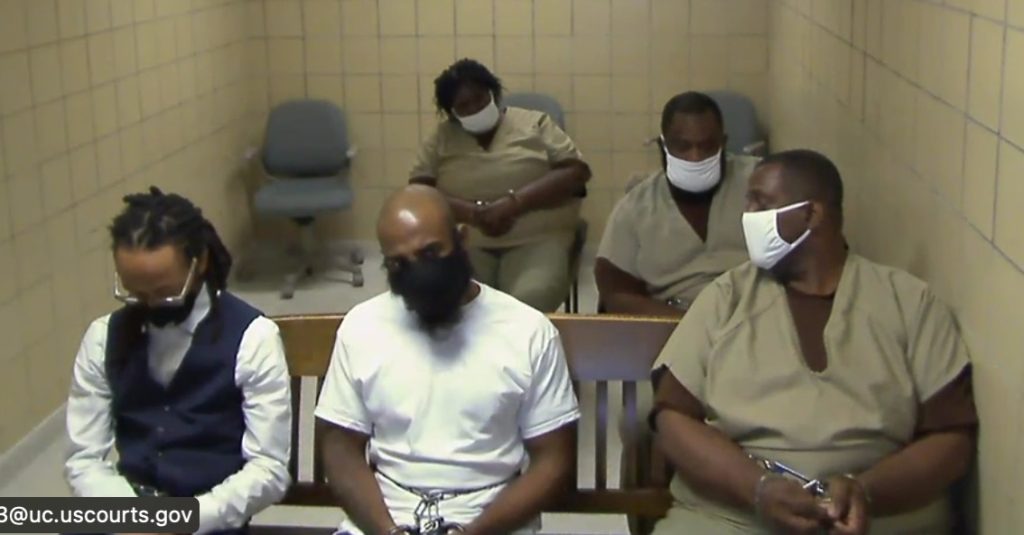 Former Premier Andrew Fahie, front right, and BVI Ports Authority Managing Director Oleanvine Maynard, back left, will face trial in a Miami court for three charges, one of which carries a maximum life sentence. The trial, which initially was scheduled to start this month, has been pushed back to January 2023 following a request for more time by counsel for the defendants. (File photo: SCREENSHOT)

The Miami trial of former Premier Andrew Fahie and his codefendants has been pushed to next January at their request.

Mr. Fahie, former BVI Ports Authority Managing Director Oleanvine Maynard, and her son Kadeem Maynard asked the Southern District Court of Florida through their attorneys for the trial to be delayed to allow them more time to prepare.

Prosecutors did not oppose the request, and Judge Kathleen Williams scheduled the trial for Jan. 17.

The proceeding previously was scheduled to start next week, but Mr. Fahie’s Miami attorney Theresa Van Vliet stated in a filing that her team could not meet that timeline. She explained that multiple terabytes of information that prosecutors provided during the discovery process were incomplete and had been delayed by issues associated with Covid-19.

“The initial review has also revealed that at least some of the audio/visual files are unreadable. The undersigned is working with her IT staff to determine the precise issue with the unreadable files,” the defence lawyer noted in her filing, adding, “In light of the foregoing, Mr. Fahie requests that the court continue the presently set trial date and reset this matter no sooner than Jan. 16, 2023, and further that it reset all currently set deadlines.”

Attorneys for each of the Maynards filed motions to join Mr. Fahie’s motion, thereby making the same request. All three defendants waived their right to a speedy trial.

They are accused of conspiring to import cocaine into the United States.

Mr. Fahie is currently on house arrest in his adult daughters’ rented Florida apartment. He was released from the Federal Detention Center in Miami on June 13 after his childhood friend and prominent VI businessman Albion “Bobby” Hodge posted a $500,000 bond and satisfied a Nebbia requirement by proving that the money was not the proceeds of crime.

Besides the $500,000 corporate surety bond posted by Mr. Hodge, Mr. Fahie also had to post a $500,000 personal surety bond, which was cosigned by himself, his daughters, and Devon Osborne, a former VI press secretary and election candidate who was identified on the bond filing as a “friend.”

As part of his corporate surety bond conditions, Mr. Fahie is required to undergo 24/7 GPS monitoring, and he is prohibited from leaving his daughters’ apartment even for attorney visits.

He also had to sign an extradition waiver, which he did the day of his release.

Ms. Maynard, meanwhile, is being held at FDC Miami after a US magistrate judge on May 11 ordered that she be detained pending trial based on her alleged flight risk and danger to the community.

Following a bail hearing on July 6, Florida Magistrate Judge Chris McAliley found that there was no combination of conditions that would assure Mr. Maynard’s appearance if he is released on bail.

Accordingly, Mr. McAliley ordered him to be detained until the conclusion of his trial.