As the Virgin Islands and other Caribbean nations consider how to re-open their borders following the coronavirus pandemic, they could find helpful examples and cautionary tales in other island nations …

END_OF_DOCUMENT_TOKEN_TO_BE_REPLACED 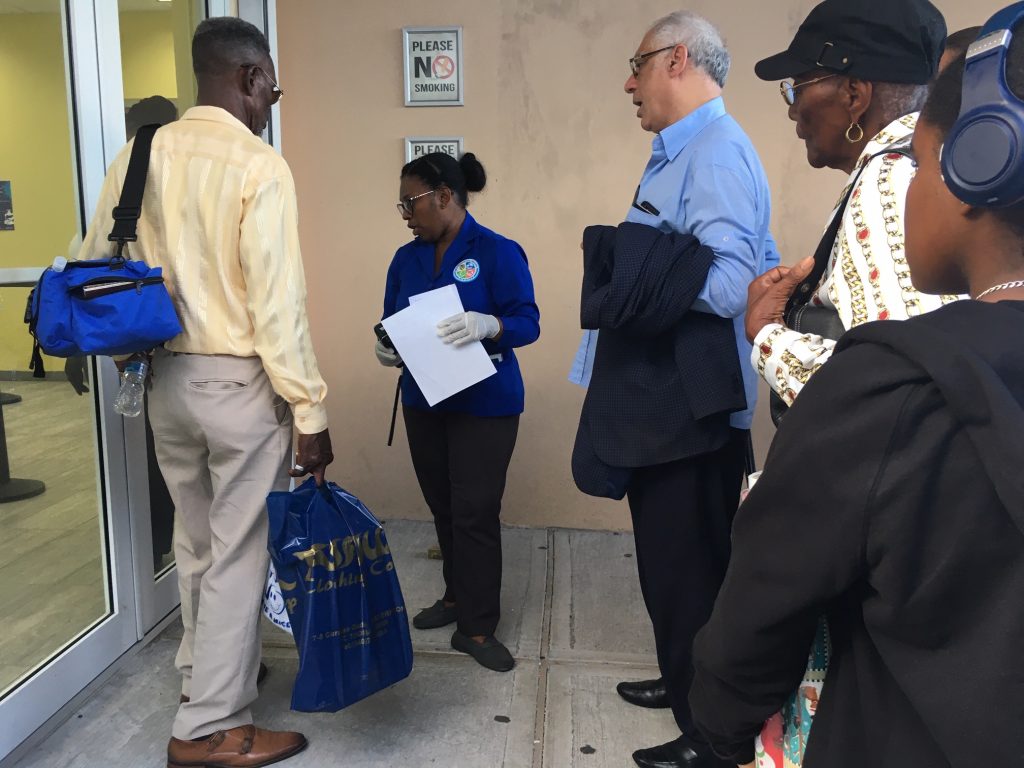 A health official leads a group of travellers to a checkpoint at the Road Town ferry terminal in early March, prior to the closure of the Virgin Islands’ borders. Two United States experts in public health recently offered their professional insights into what measures the territory could take to best ensure the well-being of residents when borders eventually reopen. (File photo: CLAIRE SHEFCHIK)

As the Virgin Islands and other Caribbean nations consider how to re-open their borders following the coronavirus pandemic, they could find helpful examples and cautionary tales in other island nations abroad, according to two public health experts who spoke during a recent video conference hosted by the Harvard T.H. Chan School of Public Health.

“We have to think very seriously about how to control visitors from overseas in a way that protects our population and ensures that they are well taken care of before they enter the constant flow within the American population,” Dr. Barry Bloom said during the April 29 session. “That’s going to be expensive.”

The doctors explained how various countries have relaxed measures meant to slow the spread of Covid-19, and what the future could hold depending on how long it takes to develop a widely available vaccine.

Here, Premier Andrew Fahie recently announced belongers will be able to return to the territory starting June 2, though the VI government has yet to announce a projected date for reopening the territory’s borders to tourists.

During an announcement on Tuesday, however, the premier criticised a proposal from opposition members that included measures to reopen some tourism operations by Sept. 1. 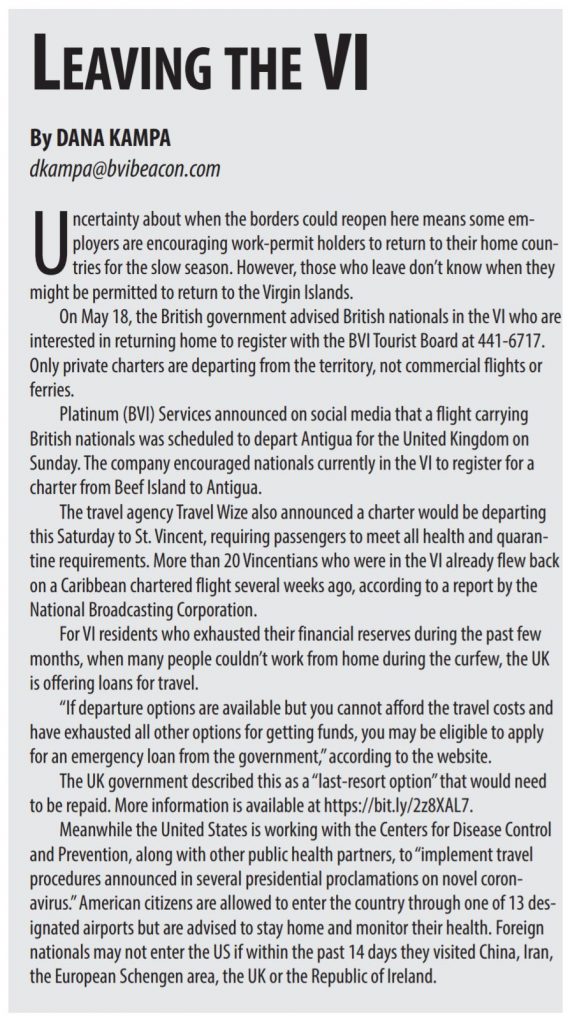 Depending on how such introductions go, members also proposed allowing day-trippers from the USVI to enter in October, and eventually allowing cruise ships on a regional level.

However, Mr. Fahie argued on Tuesday that reopening so soon might not be a risk worth taking, especially as economies around the world sharply decline.

“While we are all aware of how important tourism is to the BVI economy, especially at this time, we have to be realistic in facing certain facts,” Mr. Fahie cautioned. “Reopening our borders at this time, without proper controlled measures, places every person in the territory at risk.”

The Harvard public health experts offered their insight into what the VI should consider as it plans both internal and external reopening measures.

As a small island, the VI has some advantages and disadvantages in dealing with Covid-19, according to Dr. William Hanage, an associate professor of epidemiology with the Harvard T.H. Chan School of Public Health.

“You look at places which seem to be doing really well, certainly early on in the pandemic,” Dr. Hanage said. “What they have in common, almost in all cases, is that they’re islands. Islands are able to control who comes in and out, especially small islands, in a way that is much harder for places, as Barry said, like Manhattan.”

Moving forward, Dr. Hanage said places such as the VI, where tourism is such an important part of the economy, must consider how effective travel bans will be in the long term compared to the financial and social ramifications.

“However, if you at the moment have no pandemic on your island, and that’s a state that you want to maintain, then you have to very seriously look at travel restrictions,” he said.

As of May 18, government has announced the presence of eight lab-confirmed cases of Covid-19 in the territory. The sixth case came just as the territory was preparing to exit a 24- hour-a-day curfew, which prompted leadership to extend the lockdown until April 26. The territory remains under an evening curfew that will be reevaluated every two weeks.

Re-entry conditions could include checking temperatures at the ports, as the VI has explored. Dr. Hanage cautioned, though, that this is not a fool-proof measure on its own because not everyone who gets sick runs a temperature.

He added that the VI could also gradually open travel by allowing only inbound passengers from areas where there is relatively little Covid-19 activity.

“The safest thing to recommend would be a quarantining process, but that’s probably not something which is going to be possible within the context of a vacation,” he said. “It’s going to be very difficult moving forward. I wish I could have more positive prescriptions, but a pandemic is a pandemic.”

New Zealand and Australia’s approaches to the pandemic serve as examples where containment efforts have proven effective, explained Dr. Bloom, a research professor of public health in the school’s Department of Immunology and Infectious Diseases and Department of Global Health and Population.

Of New Zealand’s five million residents, only about 1,500 were confirmed to have the virus, according to the country’s Ministry of Health. The United States topped the list as of May 18 with more than 1.5 million confirmed cases. At the time of the call, the US was nearing 60,000 fatalities, which Dr. Hanage said was likely an underestimation given the stateby-state differences in reporting.

New Zealand has a similar advantage to the VI in that it can more easily enforce border closures because of its physical remoteness.

The country acted early when China announced the outbreak in Wuhan at the end of December, before the World Health Organisation labelled the spread of Covid-19 as a pandemic.

“There were a total of 27 cases,” Dr. Bloom said. “For any country to respond to a report of an epidemic in a remote part of China, … as New Zealand did in shutting down all flights from China, that was an extraordinarily bold move.”

Dr. Bloom said Prime Minister Jacinda Ardern’s decisive action translated to a relatively low number of cases in the country. Epidemiologists have always been sceptical of how effective shutting down air traffic would be in a large-scale outbreak, he added.

“In an island like New Zealand and to a similar extent in Australia, it worked — but only if it happened very early,” he said.

One size doesn’t fit all

What works for one island wouldn’t necessarily work for another, however. Dr. Bloom said similar measures, even taken early on, have less of an impact in densely populated areas like Manhattan. Though it is technically an island, the ease of movement in and out makes containment extremely difficult.

The professor then drew comparisons to areas, such as Singapore and Hong Kong, that relaxed travel restrictions and saw a dramatic increase in cases.

In Singapore, WHO commended aggressive contact tracing actions and a lockdown starting on April 7 that slowed the spread early, according to NPR. However, after the country relaxed travel restrictions, the number of cases jumped from 600 at the beginning of April to 17,000 by the end of the month, according to a May 1 situation report.

“The epidemic burst up in both places,” Dr. Bloom said, also referencing a spike in cases in Hong Kong early in the year.

The country recorded 150 cases at the start of March, which increased to just over 1,000 in early May. Despite the increase, the number of cases remains relatively low given the country’s population of seven million. A CNN article from May 5 noted that the second wave seemed to largely have passed in the past two weeks.

Many of these later cases in Hong Kong could be traced back to travellers from Europe and the United States, Dr. Bloom said.

Countries that have started to reopen borders are taking extra precautions, including collecting test samples at airports and insisting that incoming passengers stay at a hotel for two weeks before venturing out.

Dr. Bloom said such steps will be an essential component to containing the virus.

“We really have to think about if we get things down here, the big worry will be — as it was in China, Hong Kong and Singapore — reintroduction [of Covid-19],” he said, noting that the southern hemisphere could see a rise in respiratory infections with the changing seasons.

Dr. Hanage outlined the most likely potential outcomes in the absence of a vaccine for long-term immunity. The biggest factors include how slowly the virus transmits from person to person, how extensively health services can prepare for spikes in cases, and how well people will be able to adhere to social distancing measures amid seasonal activities.

In the US, fewer than 150,000 people had fully recovered, which Dr. Hanage said means there are a high number of active cases ongoing. That presents a challenge in determining a policy for facilitating economic activity given how many tourists to the region come from the US.

The VI saw some of the highest growth in tourism in the Caribbean region during the first half of 2019, bouncing back from low numbers in the aftermath of the 2017 hurricanes.

Between January and June last year, 8.9 million tourists visited the Caribbean from the US.

About 60 percent of the population will need to be immune after getting sick to effectively shut down transmission, Dr. Hanage said.

“That’s quite a lot of people, and it might take quite a long time to get there,” he said. “Now the rate at which that happens depends quite a deal upon the number of contacts that people make locally. … Absent a vaccine, I think it would quite likely become like seasonal flu, or perhaps like some of the other coronaviruses that we are familiar with.”

But there are still a lot of unknown factors, the professor said. In the best-case scenario, even people with mild cases would have immunity for a long time.

“If that immunity is not very long lasting — and we have good reason from other coronaviruses including the original SARS that it won’t be — what type of infections will people have when their immunity starts to wane?” he asked. “Will they be as severe as this? Will they be as transmissible as this?”

Though these answers aren’t yet clear, Dr. Hanage said it is plausible that cases will be milder in the future.

“Really looking long term — and I want to say this very clearly: We don’t really know at the moment — it is entirely plausible that this could become part of our regular landscape of respiratory viral infections, absent a vaccine,” he said.