Business > Exploring the depths without a dive certificate

Exploring the depths without a dive certificate

Snorkelling enthusiasts in the Virgin Islands who don’t have their scuba diving certificates now have an alternative way to explore deeper underwater environments: BVI Snuba. Snuba — first conceived by …

END_OF_DOCUMENT_TOKEN_TO_BE_REPLACED 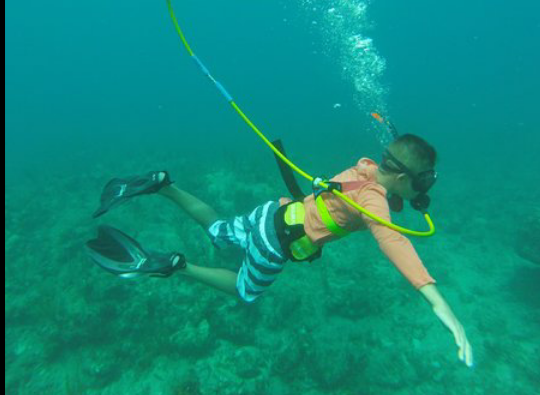 Snuba equipment allows a user to swim up to 20 feet underwater without carrying a tank. (Photo: CONOR KING DEVITT)

Snorkelling enthusiasts in the Virgin Islands who don’t have their scuba diving certificates now have an alternative way to explore deeper underwater environments: BVI Snuba.

Snuba — first conceived by California diver Michael Stafford in 1985 — is a fusion of snorkelling and diving that involves a swimmer using a regulator attached to a floating air supply above the water’s surface. It doesn’t require a special certification and allows users to explore depths up to 20 feet.

BVI Snuba launched in mid-2017 but was forced to temporarily shutter its operations after Hurricane Irma, though it reopened nearly a full year ago.

And despite 2018’s depressed tourism numbers, the business has had a successful year, according to manager Elaine Couper.

A boat captain and drive instructor with two decades of experience, Ms. Couper had to get certified through a separate course to facilitate Snuba trips.

BVI Snuba, based out of Leverick Bay on Virgin Gorda, has two air supply rafts, each of which can accommodate two people at a time. Ms. Couper leads trips to areas including Guana and Scrub islands, but she favours Mountain Point near The Dogs when the weather is calm.

There, the variety of elevation and marine life — Snuba participants have seen species like banded shrimp and arrow crabs — make for an experience that is particularly distinct from snorkelling, the manager explained.

The cost is $125 per person when splitting a raft and $150 if a customer wants the raft’s air supply to themselves, which allows for a longer swim. Residents of the VI get a 12 percent discount, and all customers are required to participate in a 15-minute safety briefing prior to embarking, according to the manager.

Ms. Couper can rendezvous with Snuba participants in places as far apart as Cooper Island, Trellis Bay or Guana Island, though she said it is not yet economically viable for her to meet customers in Road Town.

She hopes the business will expand to Tortola eventually to make the experience more convenient for cruise ship customers, though she acknowledged that an increase in operations is likely at least a year away.