Andrew “Spongebob” Persaud brought his flashy blue-and-white speedboat Fresh Squeeze to the fourth BVI Exquisite Boat Show motorcade on Friday to show it off, but he didn’t mind as children, …

END_OF_DOCUMENT_TOKEN_TO_BE_REPLACED 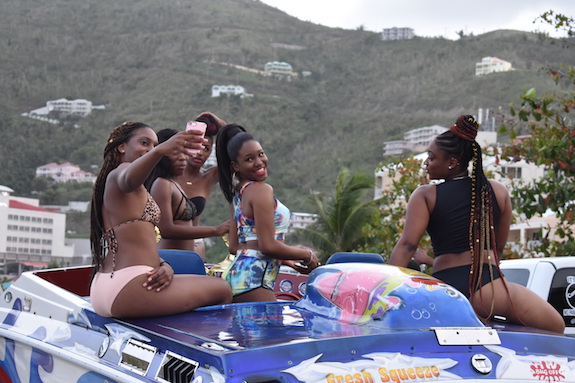 Models pose on boats being driven through Road Town on Friday as part of the motorcade held before the fourth annual Exquisite Boat Show the following day. (Photo: CLAIRE SHEFCHIK)

Andrew “Spongebob” Persaud brought his flashy blue-and-white speedboat Fresh Squeeze to the fourth BVI Exquisite Boat Show motorcade on Friday to show it off, but he didn’t mind as children, bikini-clad models and other adults climbed all over it.

Eying the trophy display, he shrugged when asked whether his goal was to claim another title.

In the end, he took home the prize for “cleanest inboard engine.” After three seasons held the same weekend as the Leverick Bay Poker Run, the boat show broke that tradition on Saturday and also returned to the Scrub Island Resort and Marina.

Organiser Meslyn Allan said the return to Scrub was part of the show’s roots, since the marina hosted the first boat show four years ago. Since then, the event has moved around from Village Cay to JY Harbour View Marina.

“I think it’s fair to say that was our most successful venue,” she said of Scrub.

At first, she added, organisers reached out to boaters to try to ascertain whether there were even enough boats to make the show worthwhile after Hurricane Irma. “We actually had a lot of good feedback from the boating community,”she said.“We reached out and asked, ‘Should we still have this boat show? How is your boat? How is everything going?’ And they said, ‘Absolutely.’ Those who weren’t already fixing their boats were ordering new parts; painting their boats. We are really happy to say that we had that support.”

Though only seven boats competed in the contest, several others showed up, and some 150 people made it to Scrub Island for the event, the organiser said.

She also praised long-time sponsors and visitors from Puerto Rico, St. Martin and St. Thomas, who she said “have been with us year after year.”

At Scrub, she added, attendees get to see each boat as it speeds through the harbour.

“It’s a high-end luxury resort, and both locals and international guests like to lounge in that type of setting,” she said.

Ms. Allan added that organisers have no plans to slow down in the coming years, perhaps even branching out to include a racing event on Sunday. Though no official races were held this year, cigarette boats were a common sight on the territory’s waters through the weekend, even after the show wrapped up.

Motorcade
Friday featured a boat motor- cade and happy hour, with five boats — each with bikini models perched on the front — parading down James Walter Francis Drive, ending with a happy hour in the lot behind the Central Administration Building.

“We usually do a small sampling of the boats to build some awareness,” Ms. Allan said. “We have some drinks and get ready for tomorrow.”

On Saturday, Anthony George, marine manager of the show, said, “We have created this event for the benefit of the boating community and boat lovers and we hope that persons continue to see the value in what we are doing and support us as we continue to grow this event.”