As internet traffic migrates from offices and schools to homes during the 14-day COVID-19 lockdown, the territory’s telecommunications providers have found themselves under increased strain in the face of customer …

END_OF_DOCUMENT_TOKEN_TO_BE_REPLACED 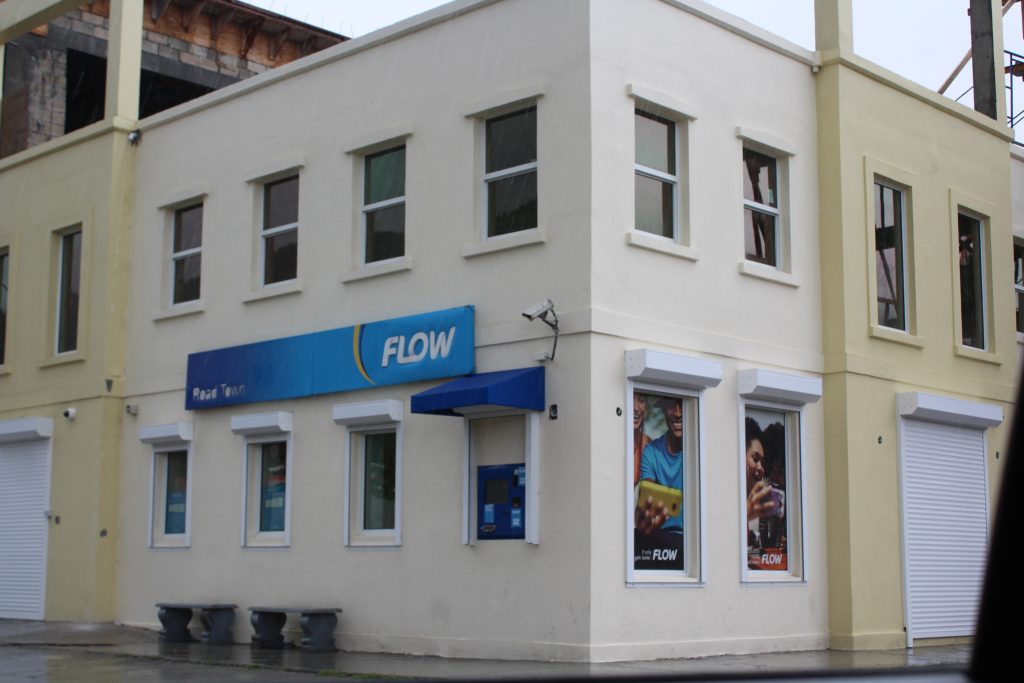 On Wednesday, FLOW headquarters in Road Town was closed for the 14-day lockdown, like other telecommunications providers. In recent days, residents have complained of slow service, which providers have blamed on the increase in use as residents work, study and entertain themselves from home. (Photo: ZARRIN TASNIM AHMED)

As internet traffic migrates from offices and schools to homes during the 14-day COVID-19 lockdown, the territory’s telecommunications providers have found themselves under increased strain in the face of customer complaints about poor Internet service.

“Nothing to do with nonpayment, but also … no idea when [the] issue would be
fixed. I asked if it depends where you live and she told me not necessarily,” resident Judy Haycraft wrote in a social media post the Thursday before the lockdown, describing her attempts to call CCT to ask questions about service she described as “zero.”

However, she reported the problem fixed in response to a question from the Beacon the following Monday.

Likewise, resident Marie Varlack lamented poor service from Digicel since the Friday before the lockdown, but confirmed the following Monday that it had improved.

These woes don’t surprise Dr. Mark Kennet, former chief economist for the
Telecommunications Regulatory Commission, who now works as a consultant in Maryland.

“Basically, you’ve got packets of data traversing the distribution network throughout the islands, and that network is designed to handle a certain number of packets at any given time,” he said. “If you have too many going around, they get delivered more slowly; it’s like filling a pipe with water: … A little stream can go as fast as it wants, but if you fill that pipe it creates pressure and it slows down.”

According to Dr. Kennet, in some of these cases, the VI is still paying the price from the 2017 hurricanes.

“Irma really messed up a lot of infrastructure on the island, and, if anything, the operators should get some recognition for getting things back together,” he said. “[But] I don’t think they put it back together with the resilience that’s going to be necessary or the quality of infrastructure that in the long run is going to be necessary in the territory.”

Even before this, the territory’s three major telecoms have been dogged by complaints about poor service and high prices. But he said that now more than ever — with financial services taking on even greater importance to the economy — it’s especially important to get things right.

“If you’re going to try to build a future as a financial services [hub], you need to have first-rate connectivity with the rest of the world,” he said.

Meanwhile, operators are scrambling to help the capacity as much as they can, with employees fielding customer concerns. Nadia James-Harris, marketing and communications director for FLOW, acknowledged in an email that the network “has experienced increased demand for bandwidth due to the recent school closures and the increased number of persons working from home.”

She added, “At this time, we have been able to meet the growth requirements with our broadband capacity. We will continue to improve our capacity to the extent possible, but if this pace of growth continues some customers may see a slowdown in speeds at times.”

Employees — themselves working remotely — must respond to customer concerns outside of retail stores.

Ms. James-Harris said the company has set up a “virtual store” to service customers via WhatsApp, allowing them to resolve any potential issues without physically leaving their homes.

“Our central technical support centres are all remote, working with a full suite of diagnostic tools to ensure full remedial support available 24-7,” Mr. Smith said in a statement.

He elaborated in an interview with the Beacon, saying that the company’s planned network expansion was still awaiting regulatory approval at the time the lockdown took effect.

“We did plan that there would be increased demand on the network just looking at the statistics worldwide and what we could do to manage on a minute-by-minute basis,” he said. “We have engineers  looking at the network 24 hours a day and making reports that we generate to look at traffic usage.”

The company is directing some customers who need greater capacity to a dedicated internet access “lite” network, which allows them to exit the mobile network and use lines of their own.

“Digicel has created a different system for customers for heavier usage than we normally would,” Mr. Smith explained.

By working with customers one-on-one based on their needs and location, he said, the company devises plans tailored to them.

Not all customer reviews have been negative. Three customers of FLOW’s fibre-optic network told the Beacon that they had experienced fast Internet speed and no problems since the beginning of the lockdown.

“Engineers design the network to the peak capacity, which is estimated based on historical experience of how things go on peak demand days,” he said. “And nobody could have anticipated that anyone is going to be in their homes all day long for an extended period. To be fair, it’s kind of unreasonable [to expect the system to be able to handle the load].”

Additionally, given the potential seriousness of the health crisis the territory faces, Mr. Smith said Digicel is looking for other ways to help that go beyond the ordinary.

“It’s not just about the way we manage our commercial network: It’s also about the support we provide. We’ve had consultations with government stakeholders about what we can do to be a good corporate citizen during the COVID-19 pandemic.”

He explained that these initiatives involve offering rebates on services to medical professionals and free connectivity to schools in some cases.

During the initial six-day curfew period, CCT BVI issued a statement explaining that it “fully understands that this will be a very tough period for everyone” and had made a “decision to keep past-due postpaid customers locally connected” during the lockdown. The Beacon was not able to reach company representatives for comment since then. The TRC also could not be reached for comment.

Customers, Dr. Kennet said, also have a role to play in reducing strain on the system by staying offline at peak times, which could mean saving big downloads or streaming movie for early in the morning or late at night.

And in the meantime, operators should be beefing up their capacity and not only preparing for the next crisis but also improving the quality of service in general, he explained. However, he added, that can’t happen without all hands on deck.

Fortunately, he added, the VI already has the needed personnel in place working for the TRC and the providers.

There are competent people who know what they’re doing,” he said. “It would be good to unleash those people. I think it would be worthwhile for stakeholders and people who know about these subjects to get together and hash out what kind of policies are consistent with the long-term interest of the territory.”