In response to allegations of poor governance aired during the ongoing Commission of Inquiry, Premier Andrew Fahie last week described a pattern of systemic problems with the Virgin Islands’ constitutional …

END_OF_DOCUMENT_TOKEN_TO_BE_REPLACED 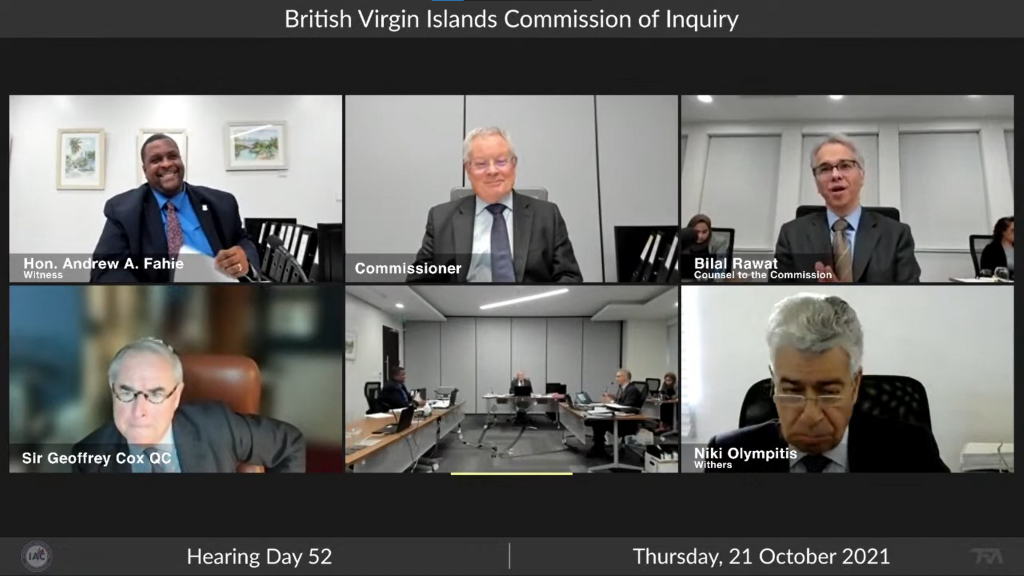 During a Commission of Inquiry hearing Oct. 21, Premier Andrew Fahie explained what he sees as the path to self-determination for the territory, and what roles he believes the Virgin Islands and the United Kingdom need to fulfil to get there. (Screenshot: COI YOUTUBE)

In response to allegations of poor governance aired during the ongoing Commission of Inquiry, Premier Andrew Fahie last week described a pattern of systemic problems with the Virgin Islands’ constitutional relationship with the United Kingdom.

While exploring his views on Oct. 21 during one of its final hearings, the commission hinted at some of the findings that might appear in its final report in January.

“It’s clear from the evidence that I’ve seen, to put it mildly, that governance in the BVI is not all that it should be,” Commissioner Sir Gary Hickinbottom told the premier. “I will have to determine in various areas the state of governance. But the evidence in some areas is pretty clear.”

But Mr. Fahie maintained that the colonial system of government itself contributes to such problems, and he recommended changes that he said would further the ultimate aim of decolonisation.

“In a modern partnership, no one should be guessing if we’re achieving goals toward self-determination,” he said. “That is something that should be clearly demarcated.”

Rather than putting specific criticisms to Mr. Fahie as in earlier hearings, the COI sought his responses to broader questions about how well the government functions and where it’s headed.

COI Counsel Bilal Rawat, for instance, asked what the governor’s role should be in promoting self-governance for the territory.

Mr. Fahie said the VI and UK need to work together to set attainable goals for attaining self-determination, deadlines for reaching them, and an understanding of what both parties can contribute to that end with “no hidden details.”

“We must have our objectives clearly marked out and be able to show how we’re going to mature as a territory to become self-determinate with the help of the UK,” he said.

If the territory made such progress, he said, it would not have to deal with “confrontations” like the inquiry.

“Scolding a child out in the public, to the international media, does not allow trust to build,” he said.

He also claimed that distrust between elected officials and community members works to destabilise the territory and move further away from self-determination. Then the premier took aim at claims made by former Governor Gus Jaspert in a COI hearing the day before.

“When a person of a higher office goes to the public and throws out innuendos like that — being the governor — without evidence, without proof, the irreparable damage that it does to person’s character and to the territory leaves scars and leaves persons wondering if this person running the country is a drug runner, if this person is in organised crime,” Mr. Fahie said. “Those are wrong. Why didn’t you come to the National Security Council?”

He added that an important component of becoming a self-governing territory will be using mechanisms within the VI’s Constitution to deal with such accusations rather than seeking external investigation.

Mr. Fahie also noted that Article 73 of the Charter of the United Nations requires mother countries to promote the independence of colonies and document the progress being made to that end.

He expressed doubt that the current “modern partnership” between the VI and UK is effectively helping the territory improve its ability to govern itself within a reasonable timeframe.

“If we have clear objectives and know the way forward and we are treated like true partners, then self-determination will come, and will come in a manner that we will not have to have these confrontations,” he said in reference to the COI.

Sir Gary, however, pushed back against the premier’s criticisms of the COI and how it has affected the territory.

He continued by noting evidence of major governance shortcomings in the territory and said the big question is why it’s in such a state.

The premier countered that his administration has made efforts to pass long-stymied governance reforms like the Integrity in Public Life Act and legislation for better oversight of contracts. However, he added, some time will be needed for them to take effect.

Sir Gary acknowledged elected officials’ recent efforts to pass such laws and policies, but he sought some reassurance that they would actually be observed.

“The other area which I welcome assistance on is as to why you say that I can have confidence that those will be followed through, given the history of governance in the territory,” he said.

Turning to the relationship between the premier and governor in leading the territory, Mr. Rawat asked Mr. Fahie about certain areas of friction like the appointment of public officers and communication among government leaders. Mr. Rawat said much of this tension seems to stem from fundamental issues with how the VI Constitution works.

He looked in particular at Section 60, the “Governor’s Special Responsibilities.” This section gives the governor power to manage defence, international security and the public service, among other responsibilities. Mr. Rawat noted that in many areas under the section, it is up to the governor’s discretion whether he heeds or disregards the premier’s advice.

“It is open to an individual governor to take a very expansionist view to Section 60, and that’s a complaint you lay at the door of Mr. Jaspert,” Mr. Rawat said. “It is also equally possible that a premier could take a very narrow view of Section 60.”

He asked the premier how any governor should approach the section, and how that would affect the governor and elected officials’ ability to work in partnership.

Mr. Fahie responded that the Constitution is a living document, and it shouldn’t inhibit the premier and governor’s ability to communicate on key issues in a mutually respectful way, even when there are grey areas about areas of responsibility.

He added that a dedicated policy unit could help address some of the longstanding governance concerns, like the circumstances under which a project can be split among multiple smaller contracts.

Mr. Rawat then asked the premier to review some letters he wrote to Mr. Jaspert, in which he used “strong language” to criticise the former governor’s behaviour.

The COI counsel said these letters included accusations of “insulting the integrity of all Virgin Islanders,” “showing contempt,” using “disrespectful utterances,” neglecting to address allegations of misconduct on projects like BVI Airways, and more.

“What the correspondence shows is that there was — and it can mutually be said — a clash of personalities between yourself and the previous governor,” Mr. Rawat said before asking if their difficulty working together pointed to a fundamental weakness in the Constitution concerning the role of the governor.

Mr. Fahie said he had looked forward to developing a professional relationship with Mr. Jaspert after being sworn into office, but their communication quickly soured over disagreements on administrative issues.

Rather than a constitutional issue, he said the difficulties between the premier and governor largely came down to personal disagreements.

“We cannot have a partnership where one side of the partnership can speak to the other side if they choose so and then hide behind the authorities that they have in the UK and make it seem like the premier is not being respectful or accommodating,” Mr. Fahie said.

He added that another area of the partnership needs adjusting as well: Though the governor submits reports to the UK, he has no obligation to disclose the content of any complaints to the premier; the premier, on the other hand, doesn’t get the benefit of making similar reports in confidence, according to Mr. Fahie.

Flipping to the other side of the coin, the COI also explored Section 56 of the Constitution, which lays out the responsibilities of ministers and public officers.

In another letter to Mr. Jaspert, Mr. Fahie opposed the governor’s appointment of a particular permanent secretary who had been openly critical of his administration. Mr. Fahie expressed concern in the letter that the appointee could frustrate the government’s ability to carry out policy in a timely manner. However, he suggested, his worries apparently went unheeded.

In the hearing, he accused the former governor of abusing the Constitution’s clause that allows him to act against the advice of the premier in appointing public officers if “compliance with that advice would prejudice Her Majesty’s Service.”

Mr. Rawat also asked what sort of changes need to be made to the administration of the public service.

The premier said he believes the entire public service system needs to be transformed in order to meet the community’s 21st Century needs.

“I’ve never seen a holistic plan of how you want to move forward the public service and what funding will be needed,” Mr. Fahie said.

He also described a disconnect in the number and skill level of employees in some areas of the public service.

“There are a lot of areas where we have been able to sit down with mature and professional heads at the table so that we can move forward in the best interest of the people of the Virgin Islands,” he said.

Mr. Rawat also briefly touched on belongership issues, citing one example where an applicant had a criminal record.

Though the Immigration Board did not recommend the person to Cabinet, the application came for Cabinet’s consideration anyway — though Mr. Rawat did not disclose who brought it — and it was approved.

The counsel asked the premier why Cabinet awarded belongership status despite the criminal record of applicant, who he did not identify.

“This wasn’t cut and dry when it was in Cabinet,” Mr. Fahie said. “The record that was brought to Cabinet showed clearly that this was a person who spent all of their life, basically, in the British Virgin Islands.

“The only place they know is here. … These are the kinds of cases we get. Some of them from time to time, being young people, get in trouble with the law.”

He said the larger question raised was whether the possibility of obtaining belongership should be eliminated for life for those who make a mistake when they are young, which he said is not specifically addressed in the law.