When Cabinet ministers effectively disbanded the Climate Change Trust Fund board shortly after the 2019 general election, they knew that then-Attorney General Baba Aziz believed the move was unlawful, Premier …

END_OF_DOCUMENT_TOKEN_TO_BE_REPLACED 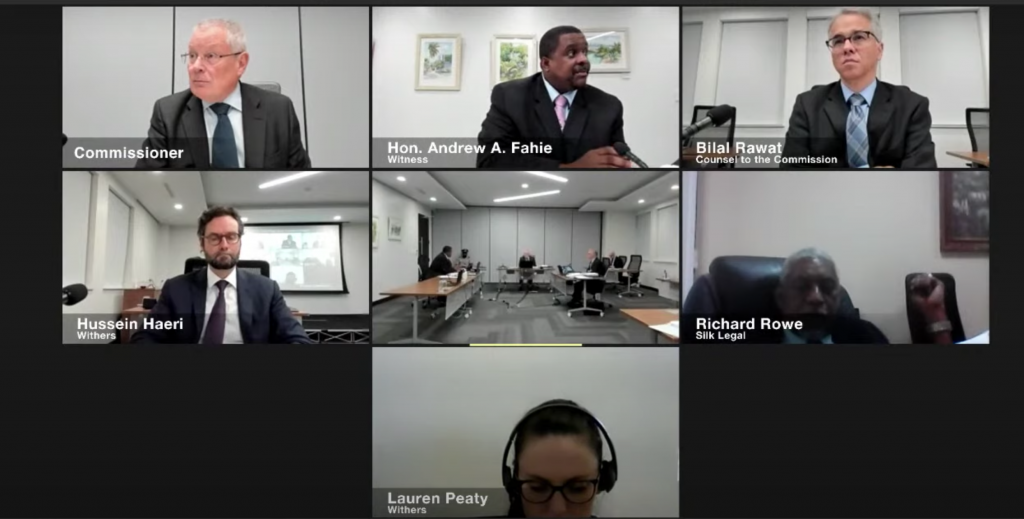 During a sometimes testy hearing before the Commission of Inquiry last Thursday, Premier Andrew Fahie admitted that he had sought the revocation of all appointed Climate Change Trust Fund Board members even after the former attorney general advised that the move was unlawful. He similarly shook up the board of the BVI Ports Authority even though the AG warned that doing so would be unconstitutional. (Screenshot: COI)

When Cabinet ministers effectively disbanded the Climate Change Trust Fund board shortly after the 2019 general election, they knew that then-Attorney General Baba Aziz believed the move was unlawful, Premier Andrew Fahie admitted during a hearing last Thursday before the Commission of Inquiry.

The disclosure came as part of Mr. Fahie’s responses to a series of “potential criticisms” that Commissioner Sir Gary Hickinbottom and COI Counsel Bilal Rawat said could arise from his handling of statutory boards.

Besides the climate change board, Sir Gary and Mr. Rawat also pressed the premier about his management of the BVI Ports Authority board, suggesting that Cabinet revoked the members without fully considering Mr. Aziz’s advice that the move might be unconstitutional and that he appointed new members without following the established process.

Mr. Fahie, however, defended his actions throughout the hearing.

While he accepted the AG’s advice that revoking the CCTF board was unlawful, he claimed that Cabinet had technically only made a decision asking for their resignation and thus did not directly revoke their memberships.

“The revocation was by the Cabinet decision — full stop,” Sir Gary said.

In response to the criticisms about the BVIPA board, Mr. Fahie said that his actions were in line with the informal political “culture” of the Virgin Islands, though he claimed that his administration is working to pass legislation to formalise some of the processes that are now drawing scrutiny from the COI.

However, Sir Gary said that Mr. Fahie’s own testimony showed that he didn’t even follow the “informal process” that he had previously described, citing a failure to ask at least two BVIPA appointees about conflicts of interest.

Perhaps the most explosive revelation from last Thursday’s hearing — that Mr. Fahie sought to revoke the Climate Change Trust Fund Board members even though Mr. Aziz said it was unlawful to do so — came after Mr. Rawat read from an April 2019 memo from Elvia Smith-Maduro, then the permanent secretary in the Premier’s Office.

In the memo, Ms. Smith-Maduro said Cabinet approval was being sought “to revoke the appointment of each board member” in order to make room for new members with fresh ideas, including a youth representative.

This request was in line with what Ms. Smith-Maduro wrote was “common practice”: “With each new government administration, … some or all membership of boards are revoked, and new members appointed to the respective boards.”

But in a subsequent Cabinet meeting, Mr. Aziz cautioned that the Climate Change Trust Fund Act sets out clear reasons for why board members can be removed, and freeing up space for members with fresh mindsets is not one of them, said Mr. Rawat, reading from a record of an April 23 Cabinet meeting.

The criticisms included various allegations: Mr. Fahie’s request did not meet the requirements for removal of members listed in the legislation; it removed adequate oversight and independent expertise from the board; and he ignored the “legal advice indicating that the policy was unconstitutional,” said Mr. Rawat.

In Mr. Fahie’s written response to the criticisms, which Mr. Rawat read aloud during the hearing, the premier defended his decision, saying that Cabinet had considered Mr. Aziz’s advice but ultimately decided that applying consistent government policy was worth the risk the AG identified.

But according to Mr. Rawat, the COI had not found any evidence to substantiate the premier’s claim that the Cabinet had considered the AG’s advice.

“The risk was that judicial-review proceedings would be taken against the decision,” Sir Gary alleged. “So you appreciated the decision was unlawful, but you were keeping your fingers crossed that nobody judicially reviewed it. That was the risk.”

Mr. Fahie agreed with that account, though he asserted that every decision made by Cabinet has some level of “risk” attached.

Sir Gary countered, “There’s a difference between a risk, perhaps a high risk, … and knowledge that it’s unlawful and nevertheless plowing [ahead] and hoping that nobody will take action to stop it.”

According to Sir Gary, Mr. Fahie seemed to be making the case that Cabinet was entitled to revoke the board memberships while accepting that doing so was unlawful.

“Is the Cabinet entitled to make an unlawful decision?” Sir Gary asked.

Mr. Fahie did not directly answer the question, and instead claimed that Cabinet became preoccupied with the Covid-19 pandemic and never actually followed up on the decision and therefore never revoked the board members.

Even after the April 23 Cabinet decision to revoke the board members, the premier said, none of them ever received a formal letter of revocation.

Thus, he added, it could be argued that they technically are still active members of the board. “We never wrote to any [board member] saying, in this case, that your positions have been revoked. … The government never moved forward with that,” Mr. Fahie said.

Sir Gary pushed back on this assertion, stating that the decision outlined in the April 23 Cabinet papers, and the evidence given by former board Chairman Edward Childs — who said that the board stopped meeting after the Cabinet decision was published and reported by the news media — demonstrated that the board membership was effectively revoked.

He again pressed the premier on whether Cabinet is empowered to make unlawful decisions, but Mr. Fahie again did not give a direct answer.

“You say that the Cabinet is entitled to make a decision they know is unlawful, contrary to the will of the legislature: They’re entitled to do that as long as they can get away with it,” said Sir Gary.

“I’m not saying that at all,” Mr. Fahie replied, adding that the AG’s “concerns were so heightened that it caused us to reconsider.”

The COI’s first potential criticism of Mr. Fahie’s management of the BVIPA mirrored the criticisms of his handling of the CCTF Board and BVI Tourist Board, which was a subject of the premier’s Sept. 15 hearing.

According to Mr. Rawat, the potential criticism stemmed from Mr. Fahie’s decision to revoke all board members except for ex-officio members.

Unlike in the case of the CCTF board, the AG did not flatly state that it would be unlawful to revoke the memberships of BVIPA board members, according to Mr. Rawat.

He did, however, caution that “the policy of replacing the membership of statutory boards with every new administration may be unconstitutional,” Mr. Rawat said while summarising the potential criticism.

Mr. Fahie’s response, he added, was much the same as the one he gave in defence of his dismantling of the BVITB.

Reading from the premier’s written response, Mr. Rawat said, “The attorney general certainly did not advise the Cabinet that … the decision was likely to be held unlawful.”

But Mr. Rawat and Sir Gary said this claim seemed to be at odds with prior testimony given by the premier.

After Mr. Rawat referenced a document in which the premier wrote that the decision was lawful and within the scope of the government’s powers, Sir Gary said, “There is a difference between the attorney general not saying positively, ‘This is unlawful,’ and your statement which says the policy was lawful.”

Mr. Fahie responded that because Cabinet’s schedule is so busy, when the AG does not say that a potential decision is “unequivocally unlawful,” then Cabinet is left to assume that decision is lawful and typically proceeds under that assumption.

The next potential criticism levied against Mr. Fahie suggested that his method of selecting BVIPA board members did not accord with the “informal process” he previously said guided board member appointments.

Recounting evidence Mr. Fahie delivered during a Sept.15 hearing, Mr. Rawat said the premier had described a threestep process for choosing board members: Prospective candidates are asked if they are willing to serve; they are asked to submit a resume or CV; and, finally, they are asked if they think that they would have any conflicts of interest.

But in emails obtained by the COI which show the Premier’s Office tapping individuals for board memberships, at least two individuals — Nathaniel Isaac and Patsy Lake — accept the position and attach their CVs without ever being questioned about conflicts of interest, according to Mr. Rawat.

In response, Mr. Fahie said that questions of conflict of interest might be asked after a candidate’s CV is reviewed.

As he did frequently throughout the hearing, he also said that because the territory is such a tight-knit community, the informal set of governing rules has worked well over the VI’s relatively brief history, even if they might seem incompatible to a large country like the United Kingdom. Mr. Fahie also assured the COI officials that his administration is working to patch up some of the holes in the informal processes that the COI has exposed.