Though most August Emancipation Festival activities were cancelled this year due to the Covid-19 pandemic, residents joined in a celebration of national pride on Aug. 3 with a motorcade honouring …

END_OF_DOCUMENT_TOKEN_TO_BE_REPLACED 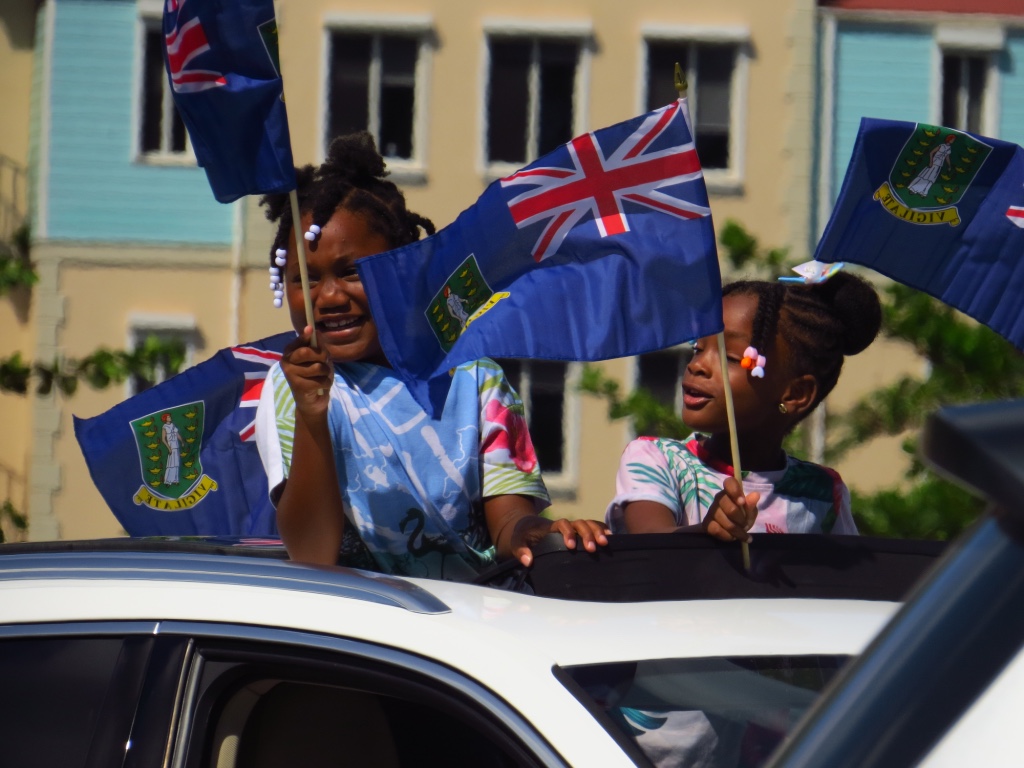 Cars decorated with Virgin Islands flags and balloons cheerfully celebrated the accomplishments of the territory’s Olympians, two of whom made history this week by making it to the finals in Tokyo. (Photo: DANA KAMPA)

Though most August Emancipation Festival activities were cancelled this year due to the Covid-19 pandemic, residents joined in a celebration of national pride on Aug. 3 with a motorcade honouring this year’s record-setting Olympians.

Hurdler Kyron McMaster and long jumper Chantel Malone made history at the 2020 Olympics in Tokyo this month, becoming the first two Virgin Islands athletes to make it to Olympic finals.

Here, the procession began at the Festival Village Grounds late in the afternoon under sunny skies with enough of a breeze to wave the VI flags that decorated the vehicles.

Blue, red, white, yellow and green balloons hung from side mirrors, drivers honked their horns, trucks blasted festive pop songs, and dancers waved from sunroofs and out windows as the motorcade made its way through communities around Tortola.

Along the way, families ran out of their homes to cheer on the procession and wave blue flags of their own in celebration. Similar celebrations took place on the sister islands.

Mr. McMaster competed in the 400-metre hurdles on Aug. 3 and placed fourth with a time of 47.08, securing his spot as the eighth fastest hurdlers of all time for the event — a feat made even more impressive by the fact that he is the VI’s first hurdler to make it to the Olympics, according to the BVI Olympic Committee.

He also hit a new personal best and set a national record.

Announcers went wild in the finals when the hurdlers who took first, second and third place all beat the event record set 29 years ago, calling the display of athleticism “astonishing.”

Gold medallist Karsten Warholm of Norway shattered the record with a time of 45.94, beating the time of 46.78 Kevin Young from the United States made nearly three decades ago.

First and second place jockeyed in close competition early in the contest and finished only 0.23 seconds apart.

Mr. McMaster said in an interview following the race that he knew after the second hurdle that he had some quality competitors at his side, but he worked to keep his composure and put up a solid time.

He said the competition is getting better in each passing Olympics, with a field of athletes who are concentrating on executing and putting up impressive numbers under 47 seconds.

“Today, what you saw was the epitome of greatness,” he said.

He predicted that it was only the beginning of more great things to come in the event.

“Obviously all of us are young,” he said. “We’re still hungry. So you can expect us year after year until all of us hang up our shoes.”

Mr. McMaster later shared his appreciation for the community support on Facebook, writing, “The love and support that was shared to me over the past few days was different! I’ve never felt the pressure of positivity and love throughout my entire career!”

Ms. Malone also made VI history as a finalist in the long jump after qualifying for her first Olympics in March with a distance of 7.08 metres, setting a national record and personal best. She secured her spot in the finals automatically with a jump of 6.82 metres in her qualifier round.

Despite two recent injuries — first her knee and then, just a few weeks before the games, a strained hamstring — she went on to compete in the finals on Aug. 2. She came in 12th with a distance of 6.50 metres. She said afterwards that she was glad to make VI history, but still disappointed with the results.

“I’m in the best shape of my life, and my intention was to go out there and at least execute, and I wasn’t able to do that,” she said. “That’s the disappointing part. Nonetheless, I am grateful for the experience and being able to compete here.”

Though she felt that her form was good on the runway, she said she couldn’t quite get the “pop” to help her get the extra distance needed to win.

“Being able to come out here and be a finalist for the BVI is a big deal, and although my intentions were to be on that podium, I’m just happy that I was able to represent the country,” she said.

Ms. Malone wrote in a Facebook post, “Although I made history for my country, I can’t help but feel that ache of a dream/goal unaccomplished. It’s back to the drawing board. Determined is a word that resonates with me because no matter how many times I fall, I find a way to rise and come back stronger.”

The VI’s third Olympic representative was swimmer Elinah Phillip in the 50-metre freestyle. Though she didn’t qualify for the final round, Ms. Phillip set national records at the start of the season.

In the finals, Australia’s Emma McKeon won gold and broke her own previous record with a time of 23:81.

Ms. Phillip said in a post shared by the BVI Olympic Committee that she was proud to set new records as the top Caribbean 50-metre freestyle athlete, especially just after completing her studies with the Columbia University College of Dental Medicine summer programme.

“I’m feeling a bit overwhelmed because this achievement means so much to me personally after a very turbulent 2020,” she said.

Shot put champion Eldred Henry had been also on the roster to compete in the 2020 games but said he needed to continue recovering from a flareup of an elbow injury.

However, he looked forward to supporting the VI team all the way, according to a press release from the BVI Olympic Committee.

BVIOC President Ephraim Penn said in an Aug. 4 virtual press conference he was thankful to the athletes, coaches and supporters who played a part in an impressive year that he hopes will pave the way to the podium before long.

He anticipated the successes of Mr. McMaster, Ms. Malone and Ms. Phillip would bolster financial support for future Olympic hopefuls so they can concentrate on their training.

During the Aug. 3 celebration in the VI, some of the territory’s young athletes shared how the Olympians inspired them.

As they were busy attaching flags to their car and lining up in the motorcade, Tiya, Tenisha and Tiffany Herbert talked about how they had fun watching each of the races and wanted to come out and show their support.

Tiya said that as a hurdler herself, she was proud to see Mr. McMaster advance so far.

If she could send the athletes a message, she said she would tell them, “They did awesome. They made us proud down here, and we appreciate them for what they did.”

Recreation Trust chairwoman Dawn Crabbe-Herbert said she hopes to see even more VI athletes make their way to the world stage, especially with the opening of a new pool on Virgin Gorda, planned for 2022.

“We are looking forward to bringing our facilities up to another level so that our athletes have the opportunity not only to train abroad, but also to train locally so that in the next Olympics, or maybe the one after, we can make it up on the podium,” Ms. CrabbeHerbert said.

This story has been updated with details of the Olympic competition results.