Local News > Farmers and Fishers Week to kick off Sunday

Farmers and Fishers Week to kick off Sunday

Starting Sunday, Farmers and Fishers Week will celebrate a sustainable, adaptable future in food production, according to Deputy Premier Dr. Natalio “Sowande” Wheatley. The event marks the resumption of a …

END_OF_DOCUMENT_TOKEN_TO_BE_REPLACED 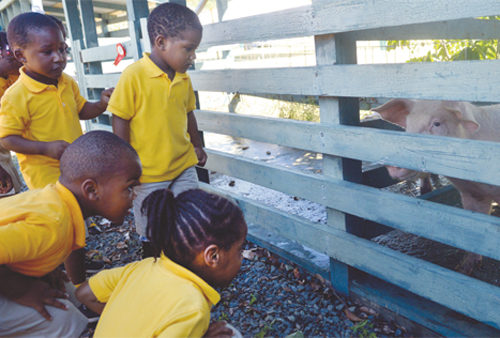 Children look at pigs during Farmers Week celebrations in January 2015. The event has not been held since, in part because of delays blamed on drought and Hurricane Irma, but a Farmers and Fishers Week is scheduled to kick off on Sunday. (File photo: NGOVOU GYANG)

The event marks the resumption of a tradition: Farmers Week previously was observed annually in the territory, but it has not been held since 2015 due in part to delays blamed on drought and then Hurricane Irma.

This year’s week of activities, which also comes in the midst of challenges, centres around the theme “Restore, Increase, Sustain and Educate,” Dr. Wheatley told the House of Assembly on April 15.

“We are still very much in a state of recovery, and recovery can take time,” said Dr. Wheatley, who is the minister of education, culture, youth affairs, fisheries and agriculture. “Due to the Covid-19 restrictions and concerns with security, fishers, for instance, could not fish as they were used to, particularly into the evening and early morning hours.”

He said farmers also faced drier conditions than normal over the past year, meaning lower production.

“Nonetheless, we must continue to support and encourage our fishers and farmers in their efforts to innovate and be adaptive,” he said.

Planned activities include daily radio quizzes and features on ZBVI; digital publications highlighting the sectors’ history and diversity; informational videos featuring VI fishers and farmers; dessert competitions at secondary and tertiary levels; a territory-wide fish soup competition; a panel discussion on the theme “The Future of Food Production — Can the Virgin Islands Rise to the Challenge?”; and projects to highlight school gardens.

Also on the agenda is a renaming ceremony for the Baughers Bay fishing dock; the re-opening of an animal pound; and the dedication of a new tractor and animal trailers for Paraquita Bay.

The Department of Agriculture and Fisheries will also host an open house, though no date has been announced.

On the final day, fishers and farmers — including backyard gardeners — will showcase their prime produce at Paraquita Bay.

Dr. Wheatley said once water supply issues at Paraquita Bay have been completely rectified, the next step will be developing a production plan for the area and ensuring all farmers using the land have signed leases.

“This is a time for solidarity and comraderies among our food producers,” Dr. Wheatley said. “We hope you will come out in numbers as a show of commitment to these industries and to each other.”

He said organisers will monitor attendance to conform with Covid-19 protocols.