Farmers market back at Olva Georges

Saturday in Road Town, farmers from around the Virgin Islands came together all in one place — and consumers reaped the fresh and tasty results. Aragorn Dick-Read of Good Moon …

END_OF_DOCUMENT_TOKEN_TO_BE_REPLACED 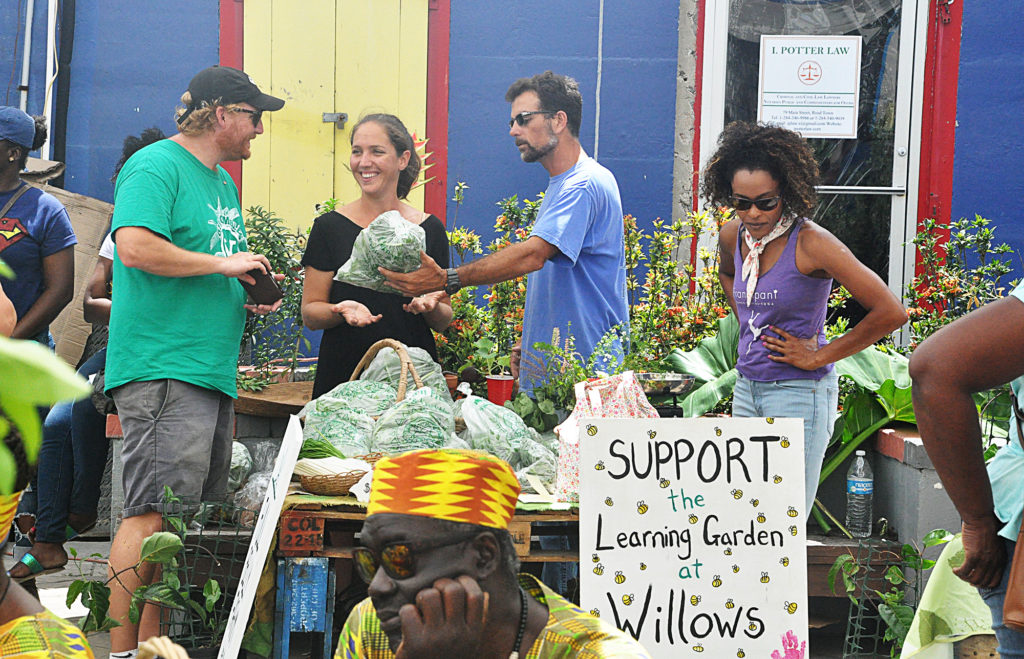 Saturday in Road Town, farmers from around the Virgin Islands came together all in one place — and consumers reaped the fresh and tasty results.

Aragorn Dick-Read of Good Moon Farm in Turnbull Estate said the idea for the market, which took place at Sir Olva Georges Plaza, hatched out of the loosely organised BVI Farmers’ Network, which has hosted a handful of similar events over the past five years. This time, though, the plan is to grow it into something permanent.

“The whole idea is to try to bring it back monthly or twice a month,” he said, adding that markets help out farmers so they can reach customers directly instead of selling to supermarkets. “They get demoralised when selling to supermarkets, because supermarkets are bringing everything in at stateside prices, so they don’t pay the full worth to the farmer.”

Nea Talbot, a farmer from Sage Mountain, was taking full advantage of that opportunity Saturday. She has been selling to chefs on a small scale for about five years, but it was only last year that she began Full Belly Farm officially.

She pointed to one of the many tiny heirloom tomatoes displayed in baskets in front of her.

“We call it a bumblebee,” she said. “Right now, it’s mostly tomatoes, eggplant and peppers.”

By the end of the day, Ms. Talbot had sold out and raised $100 for the learning garden at Willows Nursery and Preschool.

She said she hopes the market continues because it will not only help promote farming, but the culinary scene in general.

“I really want the food scene here to get more creative,” she said. “But we need to diversify to grow. There is an excellent tradition of agriculture here, and it’s providing farmers with access to a market, to have a central place where we can meet and sell. Plus, it’s just a great thing to do with the kids on a Sunday morning.”

Thibaud Guenegou, a teacher at Cedar International School, knew how important it was to get young people interested in agriculture. He came loaded down with boxes of fresh arugula to sell, all grown by students in the school’s garden. By 10:30 a.m., he was already on his last bag.

“We have a garden because we feel it’s important that students learn those skills hands-on, and here they get the opportunity to sell what they grow,” he said.

For the farmer’s market to be able to continue regularly, it needs a permanent location. Mr. Dick-Read said he already has one staked out: the empty police headquarters next to the plaza. In the process of reviving it, the aim is to bring Main Street back to what it once was.

“This was the original location for the Road Town market, back into the ’50s,” he said. “It’s a really valid cultural space, [but] even before the storm, it was a bit run down.”

He would like to see the former police station turned into an arcade-like area where people can come picnic, relax and shop.

“But we’re just tossing out ideas right now,” he said.

Set to the soundtrack of DJ Juice, the market bustled all morning with residents and visitors, including busloads of passengers from the cruise ship Silver Wind.

Besides vegetables, shoppers nabbed everything from soaps to hot sauce to green smoothies, along with fish patties, pies and cakes.

Premier Dr. Orlando Smith also went home with a bag full of local goodies and said via Facebook that he “really enjoyed the atmosphere.”

At their table, Debbie Callwood and David Matthias of Pleasant Valley showed off a crop of papaya and squash, which they grew from seeds they had imported with the help of a 4-H group in Massachusetts. They are now distributing the seeds to people throughout the territory to encourage more of them to grow their own food.

“After the hurricane, the students wanted to know what they could do,” Ms. Callwood said. “We’ve given away over 2,000 packs of seeds.”

For other sellers, the event was a chance to get out of their comfort zone. Sherry-Ann Stapleton has a side business baking homemade pumpkin breads. She said she usually sells to her coworkers and through word of mouth. The farmers market was finally getting her business in front of more eyes, and she said she was looking forward to continuing to sell there.

“I’m really impressed with the turnout,” she said, “and I hope they can start doing it on a more regular basis.”