The arugula and lemongrass looked as fresh and inviting as ever on Saturday, but the Farmers Market had been relocated from its original location at Sir Olva Georges Plaza, where …

END_OF_DOCUMENT_TOKEN_TO_BE_REPLACED 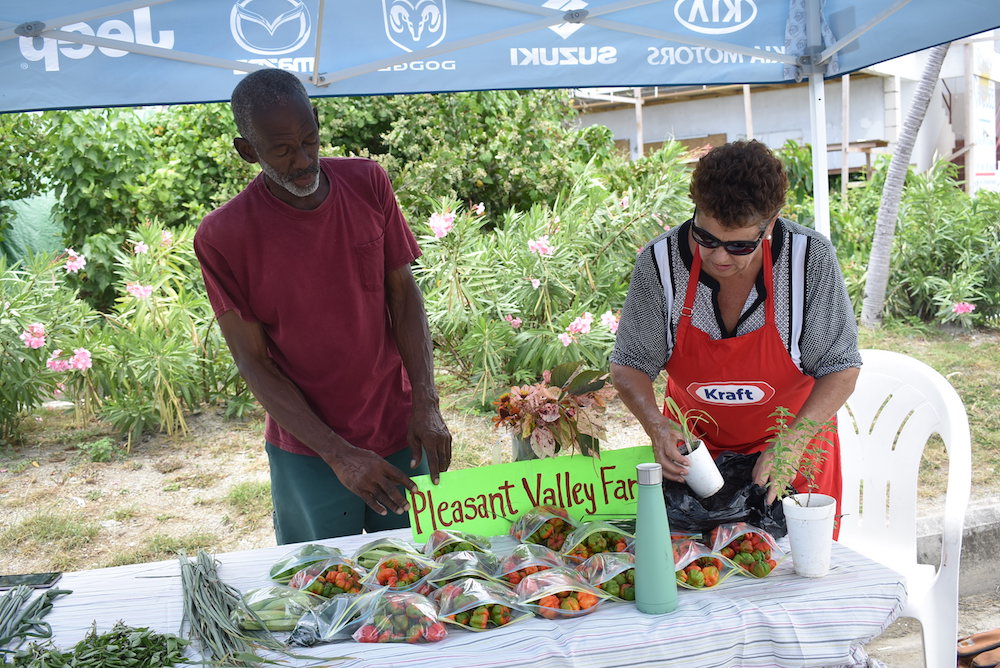 The arugula and lemongrass looked as fresh and inviting as ever on Saturday, but the Farmers Market had been relocated from its original location at Sir Olva Georges Plaza, where it had been held regularly since March, to the car park of Sunny Caribbee.

“The Farmers Market organisers were happy to comply with a government request that we move the market for the event on Aug. 4, due to a clash with a Methodist Church event in the plaza the same day,” explained Aragorn Dick-Read of Good Moon Farm, an organiser with the BVI Farmers Network, which puts on the market.

The group, he said, hopes that the market can move back to the plaza for its next scheduled date on Sept. 15.

In the meantime, he added, organisers “thought it prudent” to use the Sunny Caribee location on Saturday, due to having limited time to organise in light of the August Emancipation Festival.

Mr. Dick-Read added that he and other organisers have “prepared a proposal for the effective long-term management” of the market — which they hope to hold monthly — and look forward to discussing it with government authorities.

Before Hurricane Irma last September, there had been sev- eral attempts to begin a regular farmers’ market to the Virgin Is- lands, but none had lasted long.

Now, organisers have prepared a proposal to create a semi-permanent awning that they hope “will increase the plaza’s attractiveness and functionality as a public relaxation and event space,” Mr. Dick- Read said.

City Manager Janis Braithwaite declined to comment on her role in the market’s move, though she did not deny that her office was involved.

“To say we don’t have any involvement would not be true because the location is ours,” she said.

However, she referred all other questions about the market to the farmers.

On Saturday, about half a dozen farmers were selling, down from the usual two dozen or so.

Some had gone to Francis Lettsome Primary School in East End to help install a garden, explained Debbie Callwood of Pleasant Valley Farm.

At noon, though a steel pan band played for a few passersby, business was slow. Ms. Callwood was selling potted herbs, and explained that it probably wasn’t only the venue to blame for the lack of traffic.

“It’s back-to-school time,”she said, as she and her partner David Matthias sat under a tent in front of an array of colourful bell peppers. “

When you have parents getting kids ready for school, their money has to go to that.”

During the Aug. 4 market during the August Emancipation Festival, by contrast, she reported selling “lots of plants.”

Meanwhile, other vendors expressed frustration with the lack of traffic, and less confidence about when and if the market would return to the plaza.

Ms. Callwood, though, said both the plaza and the Saturday location have positive aspects.

“People can come here, park and look around,” she said. “But that plaza has a history of being a market and they were trying to get cultural with it. It has a different feel; it’s more of a community hangout spot.”

In March, Mr. Dick-Read echoed her reasoning about why the plaza was chosen. He said organisers were eyeing a permanent location for the market — the empty police headquarters next to the plaza, which he would like to see turned into an arcade-like area where people can picnic, relax and shop — but he added that they were “just tossing out ideas.”

Explained Ms. Callwood, “Their kids are safer there [in the plaza]. Children are very important in the whole scheme of it. If you’re only dealing with adults, you’re not doing anything for the future.”

She said she and Mr. Matthias grew up on family farms, and no matter the location, they would be happy to continue growing and selling produce.

“Our heart is in this. We really enjoy it,” she said. “Things are good in the garden.”