With ongoing road construction on Waterfront Drive, the farmers market that usually sets up in the Crafts Alive Village parking lot has returned to the Sir Olva Georges Plaza. “This …

END_OF_DOCUMENT_TOKEN_TO_BE_REPLACED 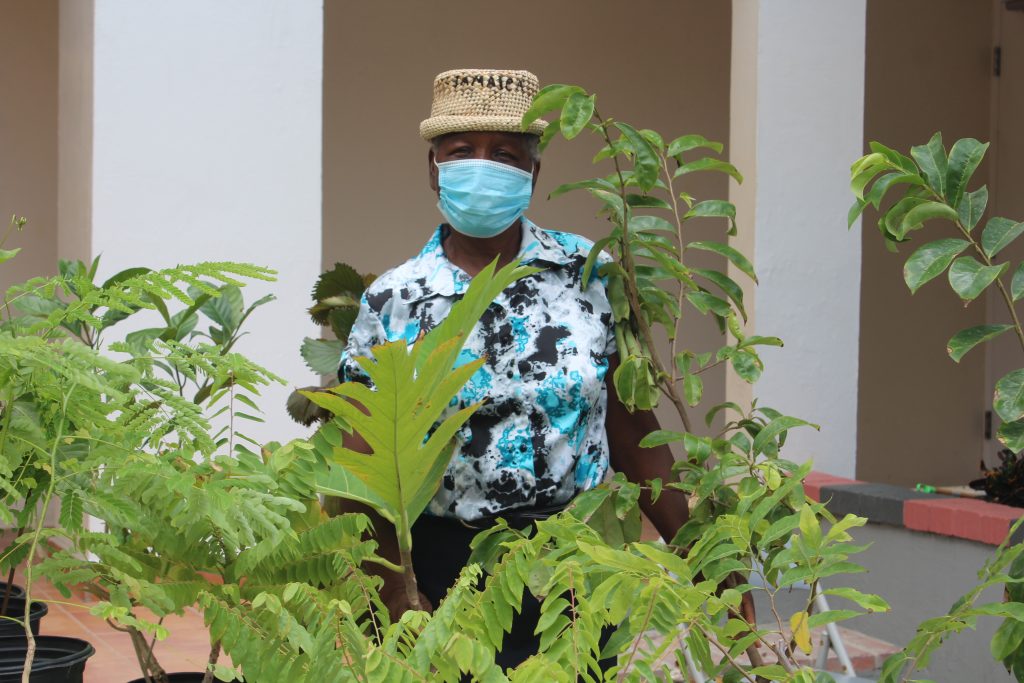 Plants were among the items on sale at the farmers market on Saturday. Due to road work near Crafts Alive Village, where the market recently has been held every other Saturday, it has been moved to the Sir Olva Georges Plaza for at least the next two months. (PHOTO: Zarrin Tasnim Ahmed)

With ongoing road construction on Waterfront Drive, the farmers market that usually sets up in the Crafts Alive Village parking lot has returned to the Sir Olva Georges Plaza.

“This has always been the landing area for Road Town,” said market organiser Aragorn Dick-Read of Good Moon Farm. “Baughers Bay had the very first settlement, but when things got a little bigger and a little more organised, this was always the heart of Road Town.”

Early in the morning, Mr. Dick-Read and other farmers set up tents and tables in the plaza, selling local products including mangoes, avocados, homemade kombucha and juices, and many more items.

“I have whelk soup today, and I’ll have conch soup the following week,” she said.

The market will now be held every Saturday — a change from previously being held every two weeks — and will remain at the Sir Olva Georges Plaza for at least two months, according to Mr. Dick-Read. He’s not sure what will happen afterwards, however.

For years, he has been advocating for a permanent location for the market. Beginning in 2018, the market was hosted at the plaza several times, with around 25 farmers who paid a small fee for advertising. Funds also were raised toward erecting a canopy, and the market eventually was shielded from the sun by repurposed sails. But it moved to the Crafts Alive parking lot last year.

Initially, the aim was to have the market at least twice a month.

Now, the BVI Farmers Association plans to make the market a weekly occurrence and hopes to grow its network of farmers, according to Mr. Dick-Read.

“We’ve had two new farmers that are not regularly here come, and we’re hoping to build it more in the next few weeks,” he said. “[The pandemic] did knock everything down. We’ve had better days here when it’s been in the square.”

“[The people from the countryside] would come down with mules and donkeys, laden with their provisions and their fruits and root crops,” he said. “This is also the best place to tie up your boat.

People living on those small islands had fish and salt, and this is the meeting spot between the sea and the country.”

The market naturally developed as a place to exchange and barter up until the mid-1960s, he added.

“It has been the town centre and market square for over 200 years,” Mr. Dick-Read said.

The market still doesn’t have a permanent home, but it will remain in the square at least until the construction on Waterfront Drive is completed, he said.