Cane juice, fruit trees, arugula, lotion and vegan cheese were among the hundreds of products offered at the third installment of the Farmers Market on Saturday in Sir Olva Georges …

END_OF_DOCUMENT_TOKEN_TO_BE_REPLACED 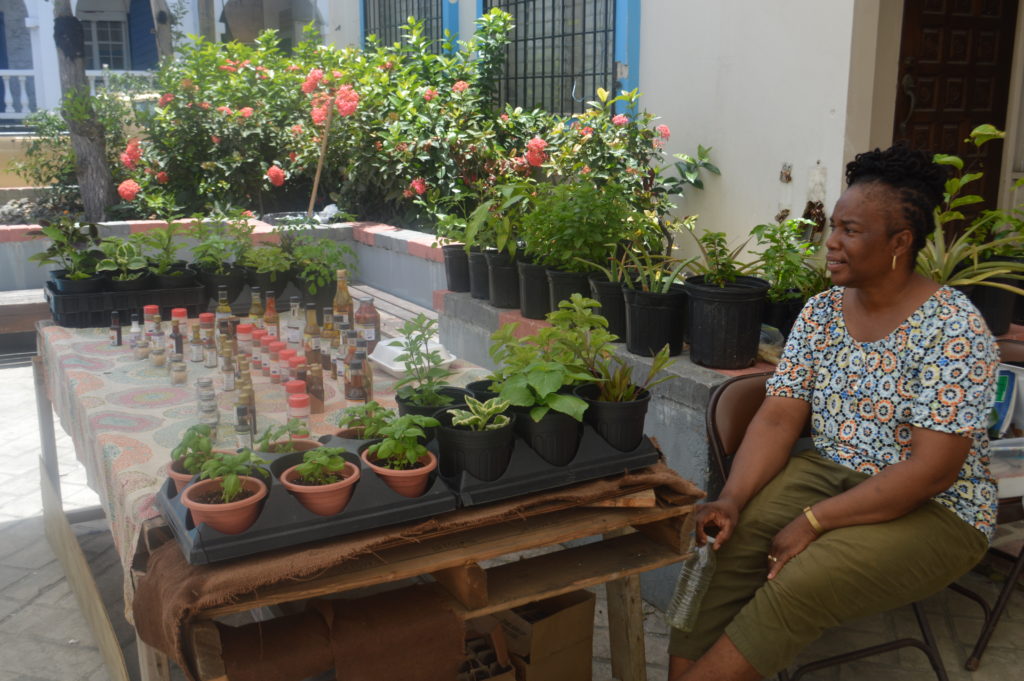 Potted plants were among the items for sale on Saturday morning at the Farmers Market in Road Town. (Photo: CLAIRE SHEFCHIK)

Cane juice, fruit trees, arugula, lotion and vegan cheese were among the hundreds of products offered at the third installment of the Farmers Market on Saturday in Sir Olva Georges Plaza.

And anyone who missed it will have more chances to sample the wares.

Organiser Aragorn Dick-Read said the BVI Farmers Network will meet next week to decide a schedule with the goal of bringing the market back each month.

The first three events each have drawn around 25 sellers, who pay a small fee that helps cover the cost of advertising.

Any additional funds will go toward erecting a permanent canopy for the market, which is now shielded from the sun by repurposed sails, Mr. Dick-Read explained.

“One of the most important things is to create the shade and keep the area covered,” he said.

On Saturday, the market was bustling with volunteers who had just finished the Road Town cleanup sponsored by Green VI, enjoying locally grown food and beverages.

Seller Fred Robinson, an employee with the Department of Agriculture who farms in his spare time, said that he would like to see the market be held more than once a month.

“I hope we can start to do it even more often,” he said. “If we could do it twice monthly, that would be even better.”

Although he has no way of quantifying whether more VI residents have taken to growing their own food, he definitely senses an increased interest in agriculture.

“After the hurricane, people are starting to realise how important it is to be able to feed ourselves,” he said.

Another seller, Dwight Pickering, is a radio announcer who has been farming for 40 years.

He recalled that Sir Olva Georges Plaza was traditionally the main market in Road Town, where sellers would offer bushels of bananas, sea turtle stew and other local products.

The market was also a community gathering place, he said.

Mr. Dick-Read said that one of the goals of the market is to create a similar central space for people to exchange ideas from around the island.

“It’s a historical norm that there should be a market there,” he said. “It’s a community focus point… a space where people can chat.”

Mr. Pickering said there’s no reason the territory can’t do more farming: There’s more access to equipment than when he started, he explained, and the VI is well suited to the endeavour, despite some challenges.

“The soil is very good even though it’s rocky,” he said.

Mr. Pickering grows a wide variety of produce, including pumpkin, bananas and plantains. Bringing back the market, he said, is a good first step toward expanding such enterprises in the territory.

“Our biggest challenge has always been access to water,” he added.

Mr. Dick-Read said that in the wake of the September hurricanes, “There is some contagion going on in the moment about food supply and that we’ve got to find alternatives. Growing food, creating income, actual security for ourselves… It’s a totally natural human instinct and response in the face of crisis.”

With the help of City Manager Janis Brathwaite-Edwards and private donors, organisers are devising various design options to create a canopy and perhaps even a permanent covered space.

Mr. Dick-Read said they hope to accomplish this goal without requesting government funds.

“It’s a win-win, because they haven’t got any to spend anyway,” he said.

“It’s about giving the younger generation a reassurance that it’s been done before so it can work again.”