Clive Baronville walked through the Noel Lloyd Positive Action Movement Park on Friday enjoying a snack of sugar cane. He pulled the cane from a white plastic bag and savoured …

END_OF_DOCUMENT_TOKEN_TO_BE_REPLACED 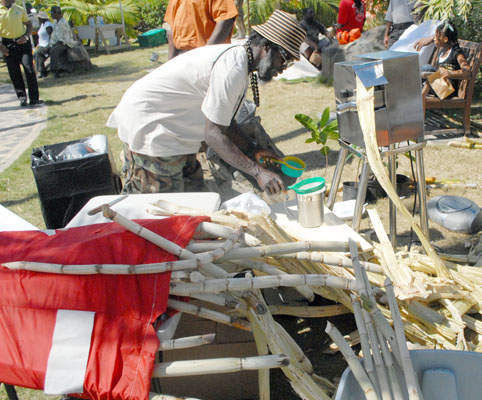 He pulled the cane from a white plastic bag and savoured it.

A food fair held at the park Friday was the culminating event for Farmers’ Week 2011, giving residents one final chance to buy local food, fresh farm produce and drinks, and local crafts.

Mr. Baronville has attended the fair for years.

“To me, this is the best year I have attended,” he said. “There are more people this year.”

Under a nearby tent, Benjamin Peters had cucumbers, spinach, coconuts, eggplants and potatoes on display. Mr. Peters held an axe, which he used to crack open coconuts for customers.

“The cucumbers finished early. … The people are buying,” the farmer said. “It is going good so far. So no need to complain.”

Farmers’ Week was not as good as it used to be in previous years, in Mr. Peters’ opinion.

“It wasn’t the best, but we just have to hope for the best and get ready for the worst,” Mr. Peters said.

“We didn’t come out with a lot. Most of what we had, we sold at the exhibit in Paraquita Bay,” the farmer said. However, she added, “It has been going good. … The people love the peeled sugar cane.”

If not for the flood and hurricane last year, the farmers would have produced more for the fair, according to Ms. Enid. “The weather put us back a little this season. … But we have to give thanks.”

At one end of the park, Wallah Turnbull was making sugar cane juice with a machine he brought to the fair.

“Could you squeeze me some sugar cane juice, please?” a customer asked.

“Yes! For sure,” Mr. Turnbull told the woman. In less than two minutes, she had a cup of sugar cane juice in her hand.

“It is very good for your kidneys and also for your cholesterol,” the farmer said.

Like other farmers, Mr. Turnbull said he thought the fair was well supported. “So far it has been good,” he said, adding that he has participated in the event for nine years.

Marrieth Smith sat under a tent as she counted the proceeds from her sales at the fair.

“So far it has been going good, and the sales haven’t been bad,” Ms. Smith said.

Unlike in previous years, she was unable to bring bananas to sell, she explained. “The floods and hurricanes set me back,” Ms. Smith said. “I lost all my banana and fruits trees.”

Deputy Chief Agricultural Officer Arona Fahie-Forbes also manned a booth. “It has been going good so far,” Ms. Fahie-Forbes said. “The support from the community has been good.”

“Farmers need a lot of prayer because they depend on the goodness of God to send the rain, the sunshine, protecting us from the bad weather, hurricanes and so that destroy the crops, and so we must continue to keep the farmers in our minds by praying that things go better with their crops,” he said.

He added that he was glad to see that agriculture still goes on in VG, even on a small scale. Mr. O’Neal also took the time to name and thank long-time farmers on the sister island, many of whom he grew up with.

Farmers and the dozens of schoolchildren, government officials and bystanders also listened to Natural Resources and Labour Minister Omar Hodge give an update on the status of the greenhouse project. As in previous speeches, he championed the project as needed to ensure “food security” for the territory, and defended it against critics who said the technology wasn’t necessary.

“This government has a primary responsibility to the older farmers, the younger farmers, to lead them into the technology. … Some people say we have the cart before the horse. I say no. Time is against us when it comes to food security,” he said.

While politicians were making speeches, groups of students were busy checking out the animals, surveying cages of chickens, goats and rabbits. Department of Agriculture officials carefully examined rows of vegetables on a table, affixing ribbons to cucumbers, sugar cane and other items.

Not all of the attendees seemed interested in farming, though. A group of teenage boys gathered around a television set at one corner of the exhibition space, playing a Nintendo Wii videogame. The action game did not appear to involve farming.