“Look! Look! I’ve never seen it before!” exclaimed a girl as she excitedly pointed to a peacock. It was one of many animals at the Saturday fair in Paraquita Bay …

END_OF_DOCUMENT_TOKEN_TO_BE_REPLACED 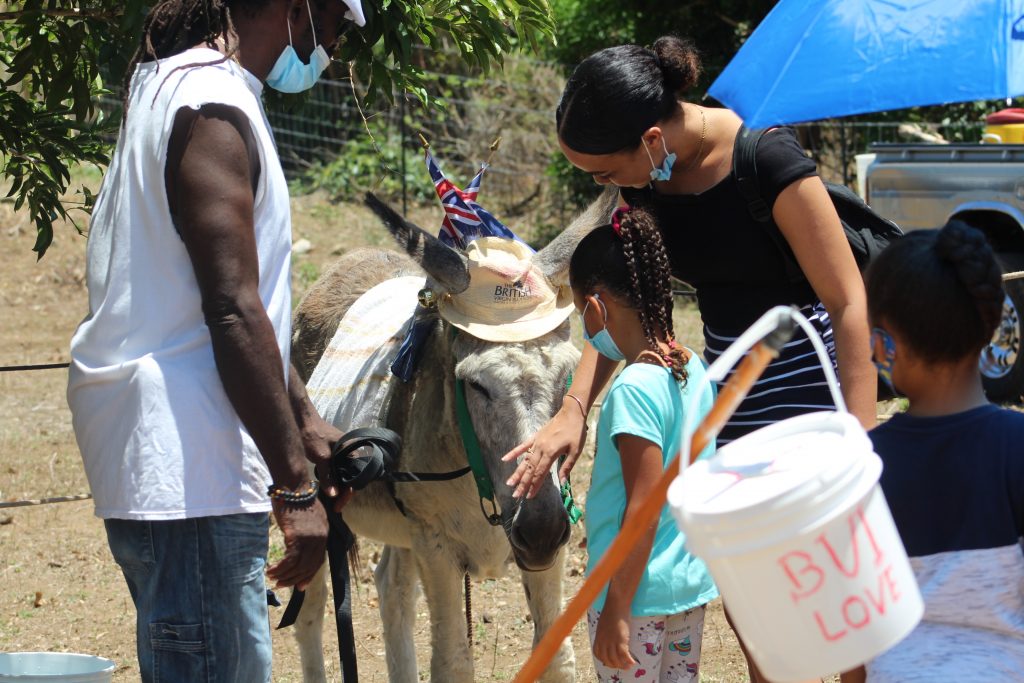 Families attended the Farmers and Fishers’ Fair on Saturday in Paraquita Bay, where some animals, like this donkey, were available for viewing and petting. (Photo: ZARRIN TASNIM AHMED)

“Look! Look! I’ve never seen it before!” exclaimed a girl as she excitedly pointed to a peacock.

It was one of many animals at the Saturday fair in Paraquita Bay that wrapped up Farmers and Fishers Week with displays including a petting zoo with tortoises, piglets, donkeys, horses, cows, chicks and goats.

“The event was well supported by the community and shows that the community has a hunger for the revitalisation of agriculture and fisheries,” Premier Andrew Fahie wrote in a Facebook post that day. “The best is yet to come!”

Farmers and Fishers Week also featured a ceremony for the renaming of the fishers dock in Baughers Bay, the opening of an animal pound and dedication of a new tractor and animal trailers in Paraquita Bay, a panel discussion, a dessert contest, and a fish soup competition.

Mr. Fahie — who attended the Saturday fair along with Deputy Premier Dr. Natalio “Sowande” Wheatley and several other legislators — also noted that the week of activities was the first since 2015, and that fishers were included for the first time this year.

During the panel discussion on April 27, panelists were asked how the Virgin Islands could produce more of its food sustainably.

William Georges, a retired agricultural scientist who previously worked for the Trinidad and Tobago government, was the first speaker. He gave a brief history of agriculture in the VI, which transformed with the arrival of European settlers and African slaves. During this time, he said, sugarcane was farmed for export along with other crops. More recently, improved shipping conditions, internet shopping, and migration have negatively affected VI agriculture, he added.

“Agriculture is not always the first choice when it comes to professions,” Mr. Georges said.

He added that agriculture also has been a low political priority compared to other pillars of the economy.

“The government needs to have a very clear agricultural policy,” he said. “Very important is the availability of water and the quality of water.”

“We have to find ways to maximise production with the limited resources that we have,” he said.

Ms. Harrigan said that when she started her restaurant Lady Sarah’s Farms three years ago, she thought she would get fresh food from farms in the VI. But the supply, she said, was inconsistent and inadequate.

“We know that agricultural production is indeed possible. It isn’t an issue of whether or not we can restore, but do we have the will?” she said. “I think it’s critical that we seek to restore agriculture as part of the national plan.”

She also spoke about the long-term sustainability of agriculture, increasing outputs, research into what grows best and in which locations, programmes attracting people into the field, and the introduction of agricultural technology.

“It’s time we started making agriculture the sexy occupation that it is,” she added.

Ms. Vanterpool stressed the importance of planning, and Mr. Wheatley spoke in depth about the fishing industry.

This year, Farmers and Fishers Week was celebrated under the theme “Restore, Increase, Sustain and Educate” or “RISE.”