Farming strategy in the works

None of Bertrand “Washasha X” Lettsome’s plants has a label, but it doesn’t matter. He planted them all himself, so he knows that the guava trees are next to the …

END_OF_DOCUMENT_TOKEN_TO_BE_REPLACED 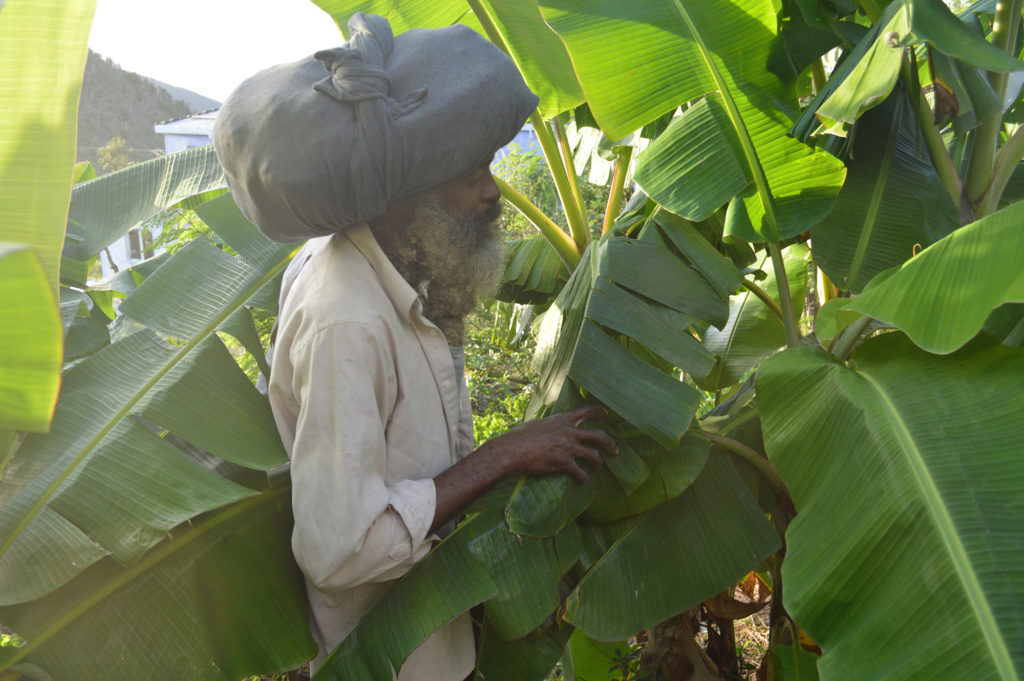 In this file photo from 2018, farmer Bertrand “Washasha X “ Lettsome pulls back the leaves of one of his many banana trees as he leads a tour of his farm in Spring Ghut. (File photo: CLAIRE SHEFCHIK)

None of Bertrand “Washasha X” Lettsome’s plants has a label, but it doesn’t matter. He planted them all himself, so he knows that the guava trees are next to the sugar cane; that cayenne peppers poke up next to black-and-yellow pumpkins; and that a vine of heart-shaped leaves crawls down the side of a banana tree. It’s spinach, but not like any spinach you find in the supermarket.

This is Washasha Man Organic Farm in Spring Ghut, and its simple goal is to feed people.

“People always need to eat,” Mr. Lettsome said. “No matter what else is going on in the world; no matter what the economy is doing.”

And as the recent hurricanes proved, when ports were cut off and supermarkets damaged, having a ready food supply can be a matter of life or death.

That’s why much of his half acre is devoted to staple crops of Caribbean cuisine.

“Pumpkin, sweet potatoes, bananas, plantains. … Those are the main ingredients in your traditional dishes. I’m trying to keep this culture alive,” he said, pointing to another section of the field, where fragrant stalks of lemongrass, mint and rosemary perfume the air. “Over there, I transition more into greens and herbs.”

He has modified his half acre by building “storm banks,” where he plows up the land and uses rocks to create different levels that make a reservoir for the rain. He said he and other local farmers are lucky because “the soil in the Caribbean is very, very rich. Anything that you want, you can try it, and most times it will grow. It’s one of the coolest things about farming here.”

The Virgin Islands was once an agriculture-and-fishing-based economy, but since the 1960s focus has shifted massively toward tourism and financial services. These two sectors now make up half the territory’s economic output, with agriculture having dwindled to around one percent, according to the CIA World Factbook. But that doesn’t mean that the industry is obsolete, VI farmers said.

Mr. Lettsome and other farmers from across the VI attended a series of educational programmes offered by the Department of Agriculture from Feb. 9-13 with a view toward developing a workable national strategy for agriculture.

On Feb. 9, the keynote presenter for the first meeting was Christian Harel, a horticultural agronomist from France who has conducted agricultural projects in Guadeloupe, Martinique, St. Lucia and other Caribbean territories via the Overseas Countries and Territories Association.

He explained how farmers could build small plastic greenhouses to grow fresh vegetables for local markets, in a departure from the large Paraquita Bay greenhouses that were destroyed in Hurricane Irma before they were ever functional.

Yesterday, Ms. Fahie-Forbes said she has not yet had time to  follow up on the strategies discussed at the meetings, but she plans to meet this week with United Kingdom consultants about biosecurity and protecting borders from pests and disease. She also said that the permanent secretary and Natural Resources and Labour Minister Dr. Kedrick Pickering plan to meet with farmers sometime this month.

In October 2015, the Ministry of Natural Resources and Labour announced that an agricultural policy would be created as part of efforts to reduce the territory’s reliance on food imports and thereby increase food security. The way forward, officials said, would include the use of the Paraquita Bay greenhouses.

At a District Two consultation meeting in Cane Garden Bay in early February, a resident asked Ronald Smith-Berkeley, the permanent secretary in the Ministry of Natural Resources and Labour, about the status of the destroyed greenhouses.

Without going into very much detail, he replied, “We have been trying pre-Irma to get running our farm-to-table programme, and I had discussions with a couple of properties who are prepared to take whatever farmers can produce.”

He added that the ministry is working with three people “who have proposals on the table” for greenhouses combined with other forms of agriculture.

Ms. Fahie-Forbes added during the Feb. 9 meeting, “For our strategy, which should be a holistic approach, production is one aspect, but we’re not just looking primarily at greenhouses, per se. We are looking at increasing our productivity throughout our territory.”

Mr. Harel said that small-scale greenhouses must “generate income for local farmers and facilitate the involvement of new generations in [the] farming sector.”

He suggested using plastic greenhouses as an umbrella to protect crops against heavy rains. The plastic should be cheap, small in size and easy to secure, using an efficient but sophisticated irrigation system, he explained.

“There’s no electricity available in the fields,” Mr. Harel added.

On Tuesday, Mr. Lettsome added, “The limiting factor on this island by and large is just water. All we really need is help with water.”

Mr. Harel pointed out in his presentation that there are few flat areas in the territory suitable for building large greenhouses. These include Paraquita Bay and Cappoons Bay on Tortola; Beef Island; and South Sound on Virgin Gorda.

Paraquita Bay housed large greenhouses that were destroyed in Irma before they were ever functional, and South Sound was excavated in 2010 for the installation of similar facilities, but the programme was never completed after the government terminated its $5.4 million contract with International Business and Trade LLC, the firm that was supposed to construct them, after a series of missteps.

Mr. Harel also noted that farming is challenging in the VI because growers have to compete with imports.

“Restaurants and hotels in BVI, but also in neighbouring islands, are accustomed to receiving most of the year round a large [variety] of imported high quality vegetables,” he said.

However, he added, local fresh produce has an advantage in other respects, such as freshness and taste.

He also discussed the risks associated with the “glut” phenomenon, when farmers grow too much when they are just starting out their ventures, particularly in island economies. He described this as potentially catastrophic, and urged farmers to diversify their crops, by, for instance, selling fresh flowers instead of vegetables.

Mr. Lettsome said that he would also like to see the government invest in more crop diversity.

“There are certain things that will grow better in a greenhouse: … flowers, herbs tomatoes and peppers,” he acknowledged. “But just be real: You need … the real staples. You can’t live without solid food.”

He added that he spoke to the late legislator Omar Hodge, the architect of the original greenhouse plan.

Hurricanes and heavy rains also pose periodic difficulties for agriculture in the territory, which can be exacerbated by a lack of a proper farming infrastructure.

“In [a] small island system, it is [often] impossible to have all the services usually provided in larger countries,” said Mr. Harel, adding that such systems also often neglect to train young farmers.

Mr. Lettsome agrees: He explained that education is key to encouraging the next generation of farmers in the territory.

“The only way I know this is because someone taught me. When I was small — 5, 6 — my father [the late legislator Terrance B. Lettsome] took me out and gave me a little area. He said, ‘This is your section.’”

He recalled that years ago, when his mother was principal at Francis Lettsome Primary School, most schools offered gardens and related clubs, but they fell by the wayside as the economy drifted away from farming.

Mr. Harel also stressed the importance of farmers banding together to create an organisation that will serve their needs, such as the one that he suggested farmers begin in St. Lucia.

That way, they can easily import materials such as seeds, fertilisers and pesticides; minimise import costs and negotiate with banks, hotels and restaurants; and plan ahead to avoid overproduction.

“If you stay on your own, I won’t say it’s impossible [to succeed], but it will take longer,” he said.

Mr. Lettsome agrees that a farmers’ organisation in the territory is “very important.” This was a principle he learned when he was chief of the Conservation and Fisheries Department.

“With the fishermen with you, you put more pressure on the government as opposed to if you just try to get the minister to do whatever,” he said.

Mr. Lettsome also alleged that VI farmers still aren’t getting all the support they need from the government.

“It’s a well-known fact that in most other countries, agriculture is subsidised,” he said. However, he doesn’t believe that it should be solely the government’s job to promote agriculture.

“Even if it’s just a pot of herbs, everybody needs to get involved,” he said. “A lot of people say, ‘Well, you know, we can’t feed ourselves,’ but I disagree. It would make me happy to see at least 100 people on each of the four main islands doing this.”

The area where Mr. Lettsome lives, upper Long Look, is one of the oldest free Afro-Caribbean settlements in the Western Hemisphere, dating from 1776.

More than 50 years before the abolition of slavery in the territory, free blacks farmed the land.

“A big part of that is our ‘agree-culture,’” Mr. Lettsome said, making a play on words. “I believe that the ability to feed ourselves was a big part of the success of the community.”

Now retired from his longtime career as an environmental engineer and public servant, he considers himself a hobby farmer, doing the manual labour himself “to keep fit,” he said, as he bent down to pull a bundle of weeds from the cabbage bed. He harvests and consumes most of what he grows himself, selling the surplus through supermarkets and word of mouth.

“I’ll send WhatsApp messages to people telling them what I have,” he said.

He’s now passing his green thumb on to his children and grandchildren, who often join him working in the fields.

“There’s something almost spiritual about eating what you grow,” he said. “God was the first farmer.”