Organic fertiliser, agri-processing and water solutions were among the topics discussed at the Sir Olva Georges farmers market on Saturday morning when Deputy Premier Dr. Natalio “Sowande” Wheatley stopped by …

END_OF_DOCUMENT_TOKEN_TO_BE_REPLACED 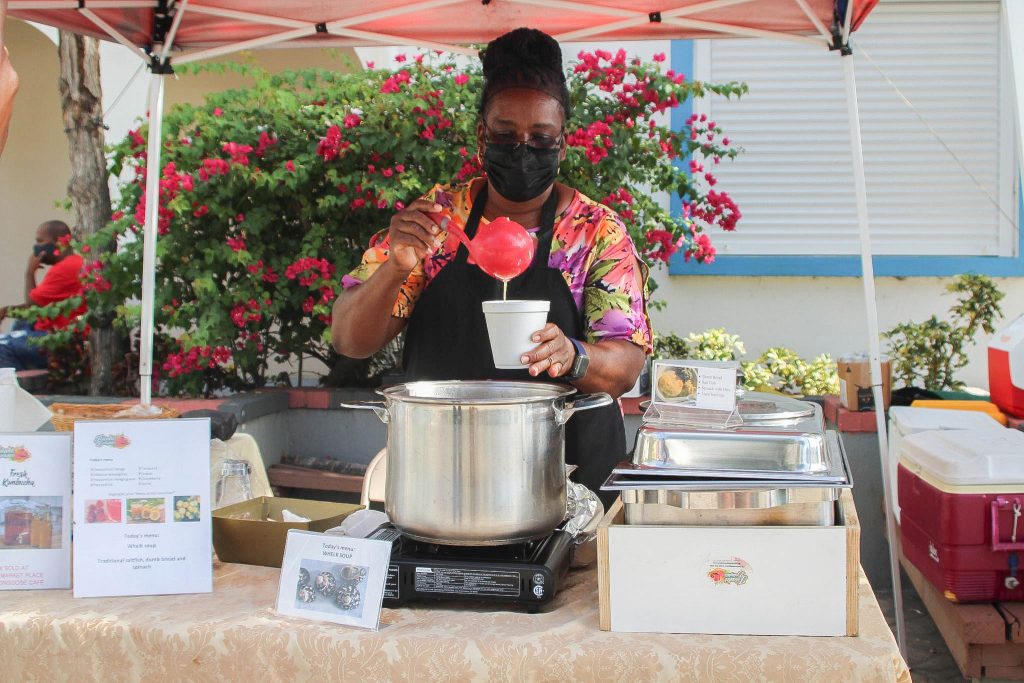 Sylvia Forbes pours some homemade whelks soup at the farmers market, which is now held weekly at the Sir Olva Georges Plaza on Saturdays. Deputy Premier Dr. Natalio “Sowande” Wheatley, who is the minister of agriculture, visited to discuss farmers’ suggestions for improving their industry. (Photo: ZARRIN TASNIM AHMED)

Organic fertiliser, agri-processing and water solutions were among the topics discussed at the Sir Olva Georges farmers market on Saturday morning when Deputy Premier Dr. Natalio “Sowande” Wheatley stopped by for a visit following an invitation from farmers at a recent meeting.

“One thing we discussed in the meeting was myself making an appearance at the market and getting a little focus on what they were doing,” Dr. Wheatley, who is the agriculture minister, told the Beacon.

“We were happy to host him,” said Mr. Dick-Read, owner of Good Moon Farm. “It was good to give him an opportunity to chat and talk to some farmers he doesn’t usually get to see.”

Among other suggestions aired at the market, Mr. Dick-Read said the Virgin Islands should be working toward “food sovereignty,” not just sustainability.

That goal, he said, includes maintaining soil quality rather than relying on chemicals for farming.

“Sixty percent of what’s thrown out in the dump is compostable. That could be distributed to farmers to improve the soil,” he said. “You don’t have to put chemical subsidies for what nature can provide. Nature decomposing is actually the way to go to feed the soil.”

Dr. Wheatley made note of this suggestion and met with a local business that produces oganic fertiliser. He also spoke to farmers about helping with the creation of “value-added products.”

“We had some people there who made wine, and they made soap,” he explained. “They had an idea about expanding their production, and some requested space to grow more products and develop.”

Dr. Wheatley added that farmers expressed concern about water supply in Paraquita Bay, which he said the Water and Sewerage Department is “moving quickly to address.”

“The exchange I had with most of the farmers was very positive and very forward thinking,” he added. “I noticed a great deal of optimism.”

The market, which used to be located near the Crafts Alive Village, moved back to the Sir Olva Georges Plaza last July.

Though at first it was held every other week after restrictions lifted from the pandemic lockdowns, it is now held every Saturday morning in the plaza.

“That area being very close to Road Town jetty historically was a marketplace for us,” Dr. Wheatley explained. “We have a long tradition of trading with the [United States VI], and so we would take things to St. Thomas and receive things there.”

Both Dr. Wheatley and Mr. Dick-Read also mentioned draft legislation currently before the House of Assembly, which previously was discussed by some of the more than 200 farmers and fishers who Dr. Wheatley said attended a January meeting on the topic.

During the meeting, Dr. Wheatley spoke about the government’s plan to establish a statutory body focusing on the business and regulation of the territory’s agriculture and fishing industries, he told the HOA this month.

An initial draft of the Agricultural and Fisheries Marketing Authority Bill has been approved by Cabinet and passed to the attorney general for review.

“Once the final draft is complete, it will be taken to Cabinet for final approval before it’s laid in the House of Assembly,” Dr. Wheatley said. “I encourage everyone to familiarise themselves with this bill and weigh in as much as possible.”

He added that the new statutory body will be responsible for re-establishing the BVI Fishing Complex in Baughers Bay, which has been left in disarray since Hurricane Irma.

“The intention is to repurpose this complex to include agricultural produce and other goods from local farmers and fishers,” he said. “We are excited about this vision and see this as a necessary step to support our fishing and farming community.”

But Mr. Dick-Read has some concerns about the proposed law, which he said was designed for a “very different agricultural environment than what we have here currently.”

“It’s more of a supply-and-demand situation,” he said. “It’s copy legislation made for St. Lucia or other places where people are growing hundreds of the same crop and it’s convenient for them to take it to the government and then have the government market it for them.”

“Everything that’s growing is already sold. We all have our own customers waiting at the farm gate, so it doesn’t make sense for the government to step in,” he said. “I get a demand for weekly supplies and I can’t grow enough.”

The bill, which would allow farmers to sell to the government, may result in “repressed pricing,” he added.

“Scarcity creates value. When something is scarce, you can charge a premium for it,” he explained.

However, he sees other parts of the legislation, like requirements for baseline studies, as welcome and important, he said.

Dr. Wheatley first announced plans for the legislation last June in the HOA. At the time, he said the bill would “modernise our agriculture and fisheries sectors and support the separation of the regulatory and business aspects of these sectors.”