Local News > FCO fires back at premier on loan guarantee

FCO fires back at premier on loan guarantee

As Premier Andrew Fahie continued to criticise the United Kingdom’s offer of a £300 million loan guarantee for the hurricane recovery, the UK Foreign and Commonwealth Office fired back Monday …

END_OF_DOCUMENT_TOKEN_TO_BE_REPLACED 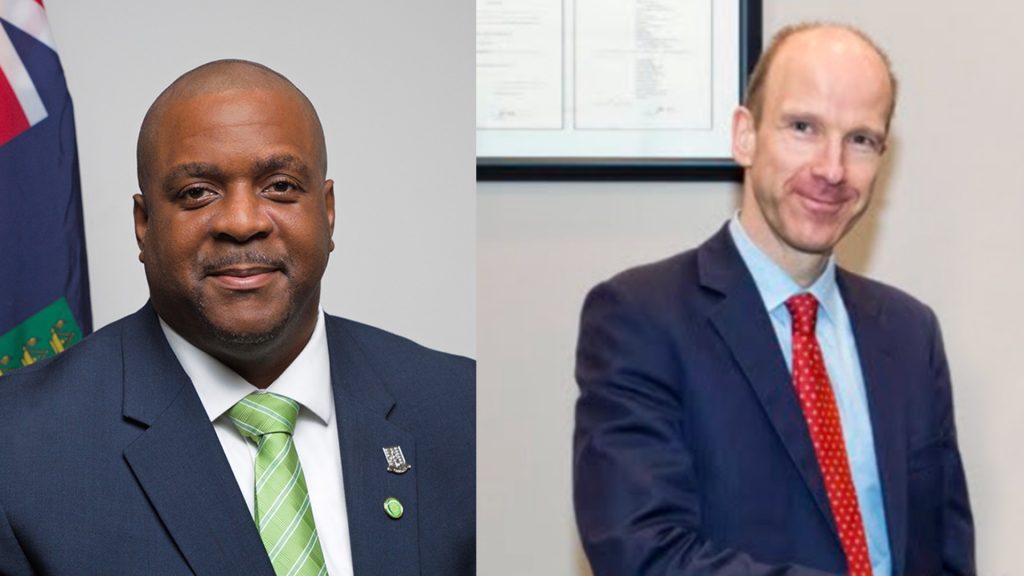 As Premier Andrew Fahie continued to criticise the United Kingdom’s offer of a £300 million loan guarantee for the hurricane recovery, the UK Foreign and Commonwealth Office fired back Monday by accusing him of making misleading statements and skipping opportunities to discuss the issue.

“It is disappointing that engagement from BVI reduced dramatically after your election six months ago, including the cancellation of your visit to London in May, which would have included meetings with [Her Majesty’s] Treasury ministers and [Overseas Territories Minister Lord Tariq] Ahmad to discuss this very issue,” OT Director Ben Merrick wrote in the Monday letter, which the Governor’s Office released at his request. “I had wanted my head of economics to discuss this with your financial secretary during our visit to BVI in June, but this offer was regrettably not taken up.”

Quoting from a statement Mr. Fahie made last month, Mr. Merrick also took issue with Mr. Fahie’s contention that the conditions of the loan guarantee would give the UK an unacceptable level of control over the VI’s finances.

“It is misleading to state that the UK is demanding BVI ‘hand over almost full control of the management of the territory’s finances to the RDA,’” Mr. Merrick wrote, echoing an earlier response from Governor Gus Jaspert. “The British Virgin Islands government is responsible for public finances, upholding the principles of sound public financial management.”

Mr. Merrick added that there has been no change to the conditions of the loan guarantee and stressed their importance in ensuring “that all recovery measures are accountable, represent value for money, and are in line with international financial best practices.”

“This model is internationally recognised as the most efficient way to implement recovery at pace and is replicated in other Caribbean countries facing similar recovery challenges,” he wrote.

The letter concluded by asking Mr. Fahie to decide by the end of this month whether he wishes to proceed with the loan guarantee.

On the same day the letter was sent, Mr. Fahie continued his criticisms in the House of Assembly, stating that he is set to travel to London next week to discuss the conditions of the guarantee. He added that if negotiations do not go well, he might hold a referendum on the issue.

“If these conditions are still there, and they want to impose these things on us or tell us that we have to sign, let’s have a referendum,” he said.

In a speech that lasted more than an hour on Monday night, Mr. Fahie also rehashed some of his concerns over the recovery funding and the Recovery and Development Agency, which was set up in large part to administer the loans under the UK’s guarantee.

Although Mr. Fahie voted for the RDA Act when it was passed by the HOA in March 2018, he said his decision was influenced by the urgency of the devastation in the months following the 2017 hurricanes and that the legislation now should be renegotiated.

Mr. Fahie also read aloud letters exchanged between him and the UK economic secretary to the Treasury, in which the secretary argued that the conditions laid out were appropriate given the liability assumed by the UK in guaranteeing the loans.

The premier said that he replied in a letter on Monday that he would travel to the UK from Tuesday through Saturday to speak to the necessary officials, but asked them to “indicate what benefit can be derived from your presence with us in the UK.”

Mr. Fahie also called the UK’s responses “political bullying” and said the UK was not responding to the VI’s concerns and instead wanted the territory to “just sit up, shut up and sign up.”

He added that while the RDA has its purpose, “it cannot be allowed to be less regulated and monitored than central government.”

Mr. Merrick responded to these claims as well, reiterating that the RDA was established under a law passed by the HOA in March 2018.

He also addressed Mr. Fahie’s concerns over the fact that borrowing under the loan guarantee could cause the territory to breach the 2012 Protocols for Effective Financial Management.

This issue, Mr. Merrick stated, was acknowledged in an Aug. 21, 2018 letter to then-Premier Dr. Orlando Smith, which Mr. Merrick attached to the correspondence.

“Any transition period can of course only be finalised when you express how long for, and what amount of borrowing, the government wish to take up,” he told Mr. Fahie. “This correspondence is the latest in a long line of engagement on this topic between representatives of the UK and British Virgin Islands governments.”

In Mr. Merrick’s letter, he also stated that he had been advised of Mr. Fahie’s upcoming visit and had asked the governor to attend.

“It is vital that we understand your specific objectives for the visit so as to ensure that appropriate officials and ministers are available to meet with your delegation and that a substantive discussion can be had,” Mr. Merrick wrote. “I would request that your office work with the governor and his office in the first instance on these arrangements and the specific detail of any issues you wish to discuss.”