Rochelle Smith wanted to teach the children who gathered around her a cultural phrase used throughout the Virgin Islands. “You ever heard anybody say to you, ‘You talk so much, …

END_OF_DOCUMENT_TOKEN_TO_BE_REPLACED 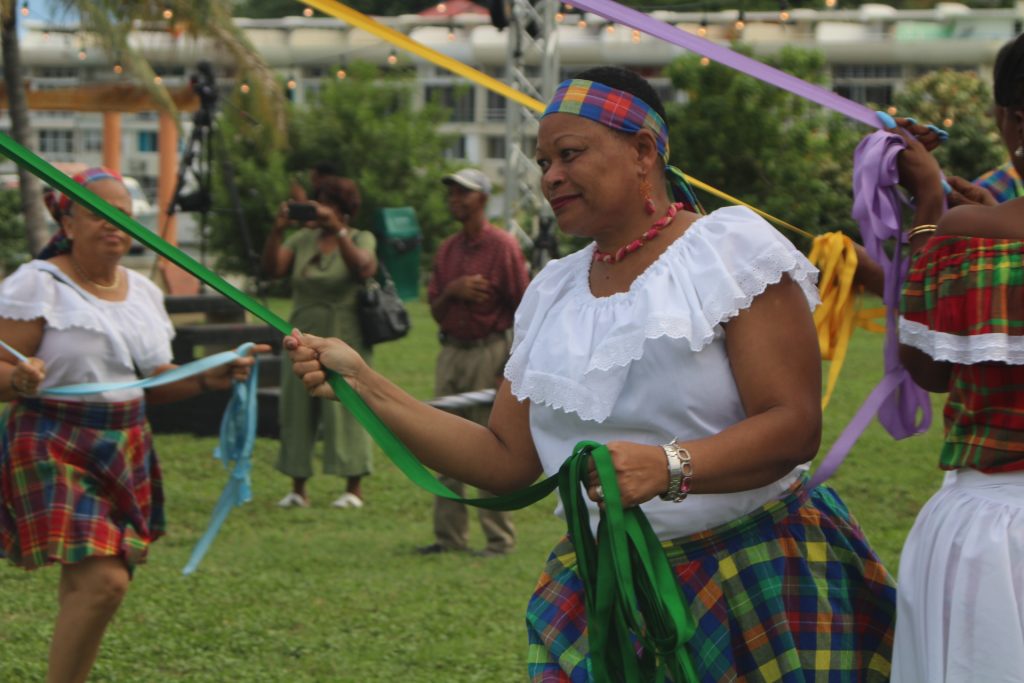 The Heritage Dancers participate in pole plaiting during the first-ever Dolores Christopher Festival of the Arts on Sat- urday, an event dedicated to celebrating the cultural heritage of the Virgin Islands. (Photo: ZARRIN TASNIM AHMED)

Rochelle Smith wanted to teach the children who gathered around her a cultural phrase used throughout the Virgin Islands.

As the story goes, she explained, a woman used to talk so much that one day she came across a mooing cow. Not realising the animal wasn’t a person, she responded, “Howdy!” and kept rambling on.

So the expression, Ms. Smith told the children, means you’re a chatterbox.

She was leading storytelling under the literary arts tent at the first-ever Dolores Christopher Festival of the Arts on Saturday. Her story about the saying was one of two that she shared with the kids, and both centred around the cultural his- tory of the territory.

A teacher of English at the H. Lavity Stoutt Community College, Ms. Smith is currently compiling a collection of short stories to help children learn about VI culture.

Storytelling was one of many activities during the festival, which began at 9:30 a.m. and lasted well past 10 p.m.

The occasional clouds that passed over on Saturday only added to the creative atmosphere in Queen Elizabeth II Park, where several tents were set up.

The day kicked off with a thanksgiving service followed by a walk down “old Main Street” guided by Miss BVI Bria Smith.

Music began playing around 2 p.m., featuring local fungi bands, and around the same time there was a pole plaiting demonstration by the Heritage Dancers.

K’Deeya Dawson and Shile David, students from Elmore Stoutt High School, participated as a team and served their own twist on pea soup, which included ginger.

The students said once they heard an announcement from their teachers about the competition, they decided to enter because of their passion for cooking. It was their first time making both dishes, but they won first place in the fish and fungi category.

The festival, he said, was the first held in honour of the late Dolores Christopher, who was a supporter of the arts.

“She put on the festival for a few years as the representative for the Fifth District and she was the director of trade and promotion — always involved in cultural activities,” he said.

Ms. Christopher was one of the founders of the annual Christmas on Main Street event and she spearheaded the 2013 VI Festival of Arts.
Other cultural figures also were honoured during the event, including storyteller Elmore Stoutt, Heritage Dancers founder Eileene Parsons, poet Dr. Quincy Lettsome, and others.

Ms. Parsons took the opportunity on stage to urge the public to support the building of a dance auditorium with the help of the government.

She said the building, which was partially completed before construction was halted, also could be used for after-school programmes.

Teachers at the BVI Dance School set up a tent where they sold baked goods in support of the school, and students performed a dramatic reenactment of VI history from its ancestral beginnings in Africa to the present day.

A steel-pan competition and a fashion show followed. As the night progressed, there was an open-mic poetry session and live jazz.