Festival kicks off with music, pageants

The 65th August Emancipation Festival is well under way, with upcoming performances by local and international bands as well as the Rise and Shine Tramp and the August Monday Parade. …

END_OF_DOCUMENT_TOKEN_TO_BE_REPLACED 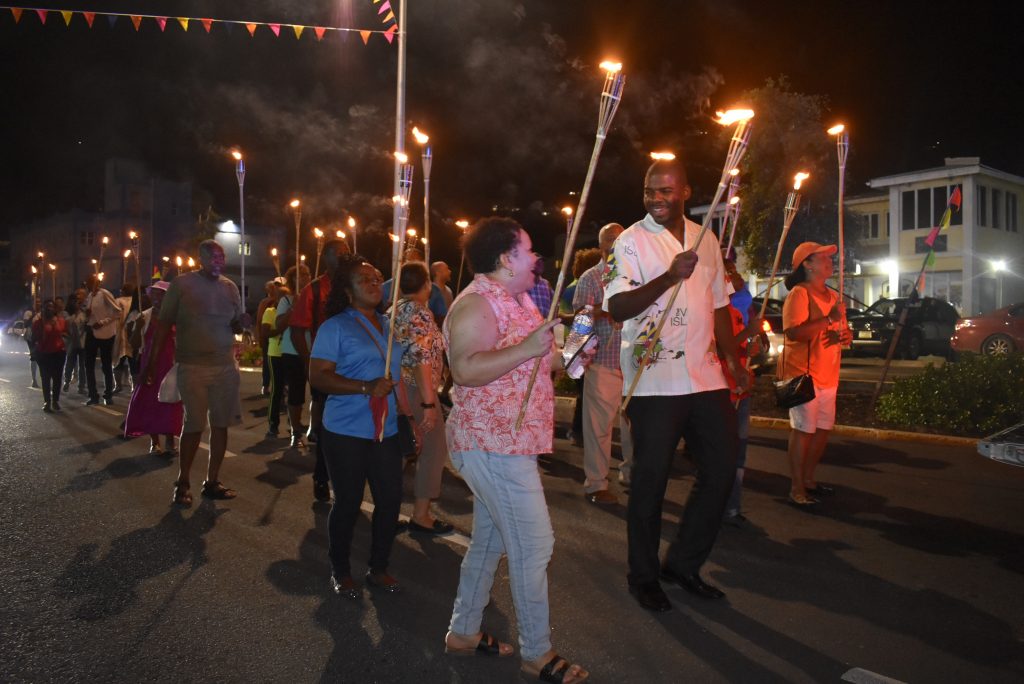 The annual torchlight procession on Friday began at the Noel Lloyd Positive Action Movement Park and ended at the Festival Village Grounds for the official opening of the August Emancipation Festival. (Photo: ZARRIN TASNIM AHMED)

The 65th August Emancipation Festival is well under way, with upcoming performances by local and international bands as well as the Rise and Shine Tramp and the August Monday Parade.

On Friday, the Festival Village opened with a torch-light procession followed by performances by bands including OMG and Rock City leading into Saturday’s headlining act, Popcaan.

The village was packed late into Sunday morning, when the Jamaican dancehall artist took the stage around 2:30 a.m.

Earlier in the evening, many stood to the edge of the 28 booths set up in a semicircle around the stage, but as the night progressed the entire arena filled with spectators. Families and children enjoyed the carnival rides set up toward the back of the village as concertgoers filled up inside.

Game booth worker Ivanna Daniel said the Festival has been attracting many people.

“We got people from all over coming up: Trinidadians came over, people from Guyana, people who are just visiting that came for the Festival,” she said, adding that a lot of people came from St. Thomas for Popcaan’s performance.

It is Ms. Daniel’s first time working at a booth in the Festival, where she facilitates ball games.

“We lost a few gifts. … They’ve been getting prizes,” she said. “They come with some skills.”

All in all, she said the Festival has been going well so far.

“It’s very exciting. … For years now, my name been popular around but I haven’t gotten the exposure that I needed,” he said. “I performed in night clubs, but not a big open stage in front of so many people.”

Priceless, who is from Tortola, performed original songs that he wrote and arranged, ranging from rap to dancehall. He’s been rapping since he was 10.

“I’m just thankful for the opportunity, and going forward I just want to go hard,” he said. “To me it’s a tap on the back; it’s a job well done after all the years.”

With four contestants vying for the princess crown and two for the title of prince, the pair came out on top after a series of competitions: ambassadorial speech, ambassadorial wear, spirit wear, talent, and eveningwear. They also participated in a creative wear segment, which was circus themed.

Though participation was lower than usual, pageant chairwoman Jaynene JnoLewis has high hopes for the future, stating that the event will come back “stronger and better than ever.”

The prince and princess will serve as ambassadors for the territory, eventually going to Bulgaria to compete.

Mr. and Ms. Junior BVI also were crowned on Sunday, with Eusa Adams and K’Zea Weeks taking the titles. The Miss BVI Pageant will be held Sunday at HLSCC.

Over the next ten days, the celebrations will continue in Road Town, East End and Carrot Bay in commemoration of the Aug. 1, 1834 formal abolition of slavery across the Virgin Islands and the rest of the British Empire.