Local News > Few, if any, fire precautions were taken at Coxheath before blaze

Few, if any, fire precautions were taken at Coxheath before blaze

Before a massive fire broke out at the Coxheath dumpsite two weeks ago, many measures that are typically used to prevent fires at landfills were not implemented — including monitoring …

END_OF_DOCUMENT_TOKEN_TO_BE_REPLACED 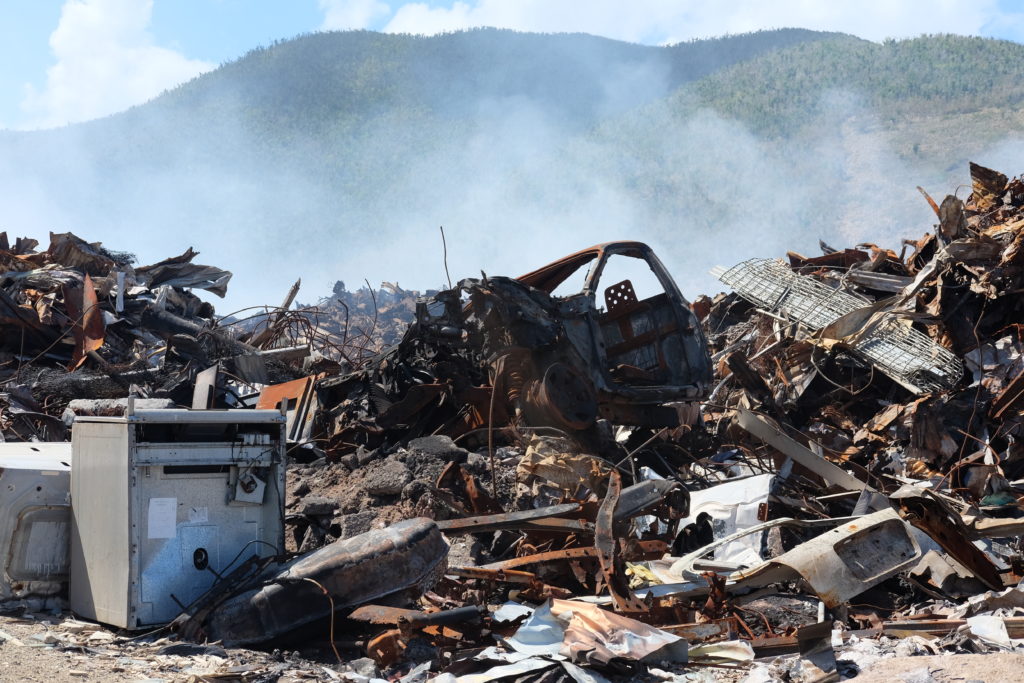 An array of different types of waste — including entire cars, household goods and construction materials — could be seen in the smouldering heaps of trash in Coxheath on Monday. (Photo: AMANDA ULRICH)

Before a massive fire broke out at the Coxheath dumpsite two weeks ago, many measures that are typically used to prevent fires at landfills were not implemented — including monitoring for flammable gases, maintaining tight security at the site, and compacting garbage.

Such steps were bypassed in large part because the site was never intended to be a landfill, but merely a temporary location to manage the territory’s hurricane debris, said Greg Massicote, manager of the Department of Waste Management.

No application was submitted to the Town and Country Planning Department for the land at Coxheath — which is mostly owned by Premier Dr. Orlando Smith — to be used as a dumpsite after Irma, officials confirmed.

Since then, the site has been referred to as a “debris management hub” and other similar terms in government press releases and official statements rather than a dumpsite or landfill.

“At any landfill you tend to have those mechanisms in place to control pollution and prevent fires,” Mr. Massicote said. “But again that site was just a management hub, which means debris came, then they would have been sorted and would eventually be processed and exported before the land was returned to its original use. We estimated it would be used for up to a year in the worst-case scenario.”

But now, after both main post-hurricane “debris management” sites have gone up in flames — first Paraquita Bay last October, and now Coxheath — officials are beginning to re-evaluate fire hazards as they relate to waste management in the Virgin Islands.

And as the large piles of garbage continue to burn at Coxheath this week, the Fire and Rescue Service still has not determined what caused that blaze in the first place.

“It’s not something we are in the position to investigate right now,” Chief Fire Officer Zebalon McLean said on Tuesday. “We haven’t had an active investigation because the areas are on fire, so it would be difficult to get close enough to collect samples. It’s not physically possible.”

One of the main ways to prevent a landfill fire is to monitor emissions of substances like flammable methane gas, according to the United States Federal Emergency Management Agency (FEMA).

Other tactics — like thoroughly inspecting what garbage is being dumped at the site and compacting waste to prevent buried “hot spots” from forming — can also reduce the risk of fire.

In the US, some of these fire-prevention techniques are required by law at larger landfills, according to FEMA.

However, none of those methods was used at Coxheath, Mr. Massicote confirmed, nor was a liner placed under the mounds of trash — a measure typically used in landfills to stop contaminants from seeping into the soil and water below.

Those decisions were made in part because of the dumpsite’s informal label, and because of a lack of necessary funds, the manager said.

“We had signs at the debris management sites saying what was being accepted at each hub,” Mr. Massicote said. “And until a certain point we had checkpoints [to examine the type of trash coming in].”

But the amount of waste — of all kinds, not just storm debris — was getting out of hand.

On some days vehicles lined up waiting to dump garbage, and the site often saw more than 200 trash deposits daily, Mr. Massicote said.

A surveyor determined a few weeks before the fire that more than 130,000 cubic yards of waste had been dumped in Coxheath, he said.

“We didn’t have the resources to have boots on the ground, or many boots on the ground [to look at all incoming waste],” Mr. Massicote said. “We tried up until the very end, but at some point the financing — like in any operation — kind of takes the lead. It dictates.”

Processing and compacting garbage has not started at Coxheath, the DWM manager said, though he added that before the fire his department had begun to separate recyclables from the rest of the trash heap.

“That was Kausina’s responsibility,” Mr. Massicote said, referring to the unregistered company backed by government that has not yet made good on its promise to separate recyclables at Coxheath and ship them off island.

“The idea was that we would start creating a pile of metal so when they do come through it would be easy pickings for them. We started sorting instead of waiting for them to get on site.”

Another factor that contributed to the influx of waste at Coxheath was the closure of the dumpsite in Paraquita Bay in late October, he said.

The garbage at that site caught fire during the early morning of Oct. 26, and “anything that could have burned” went up in flames, according to Mr. Massicote.

After that, all hurricane debris were diverted to Coxheath, and the Paraquita Bay site was closed.

Mr. Massicote said he couldn’t recall being told the cause of the Paraquita Bay fire. Mr. McLean, the fire chief, spoke similarly.

“We do so many reports and sometimes it’s difficult to remember,” Mr. McLean said, adding that he was unable to give a time when the results of that report could be retrieved. “We lost most of our resources here, and sometimes have to be creative in finding some of it.”

Premier Dr. Orlando Smith owns much of Coxheath, including the large swath of land where the dumpsite is located, according to filings at the Department of Land Registry.

But no application was submitted for that location to be used as a dumpsite after Irma, TCPD Chief Planner Greg Adams told the Beacon in March.

Instead, Coxheath was declared a debris “collection point” as part of a waste management plan created by the National Emergency Operations Centre, according to Sharleen DaBreo, the director of the Department of Disaster Management.

“It was anticipated that this [would] be a major concern for us and an area where funding was required,” Ms. DaBreo wrote in a WhatsApp message on Tuesday.

The United Kingdom supported the plan and committed $1 million towards a car crusher; “cleanup kits” for “a number of agencies;” and vehicles for the DWM, Ms. DaBreo added.

Specific details about the rest of the NEOC’s plan for garbage, though, are still under wraps.

Ms. DaBreo said the plan was “handed over” to the Ministry of Health and Social Development, which is currently implementing it.

The document has not been made public, however, and MHSD Permanent Secretary Petrona Davies, Dr. Smith and Governor Gus Jaspert could not be reached for comment.

Cause of fire unknown

The future of the Coxheath blaze remains as uncertain as its origins.

As of yesterday, the fire was still burning 14 days after it started, and the NEOC was still activated at level two for the second week in a row.

Mr. McLean was unable to give an updated timeline for when firefighters will be able to completely extinguish the blaze.

Every time workers uncover a new layer of garbage, “flare-ups” of smoke can occur, he said.

“We’re trying our best,” he said. “It’s just tough knowing that people in that area have to deal with this thing night and day.”

And if firefighters were to stop fighting the blaze altogether and let the fire “burn itself out,” he said, the garbage would be burning for at least six to eight months.

Mr. McLean said his team is no closer to finding the cause of the fire, and may never know for certain.

“The reason we haven’t had an active investigation yet is because the areas are on fire, so it would be difficult to get close to the area to collect samples. By now if there was any evidence to present itself it may have already evaporated,” he said. “But most of our energy right now is spent trying to suppress the fire and get rid of the smoke that’s been plaguing people in West End.”

Meanwhile, some residents have speculated that the fire was set intentionally.

A few Facebook users claimed that they saw trenches being dug around the perimetre of Coxheath before the fire, suggesting that this work meant the DWM was planning for the blaze.

Mr. Massicote said these theories likely derived from the dirt area that the DWM had created as a staging area for separating metals.

“I read something like that on Facebook and I had to laugh,” he said. “Mainly because sometimes you’re doing something and there’s a reason why you’re doing it, but because it’s not being relayed to the public, they don’t understand why it’s being done.”

The manager added that he wants to provide factual information to the public and to be more vigilant about fires in the future.
Before the Coxheath blaze, he said, he typically never met with the fire service until after a fire had happened.

“Moving forward, it would be best to have them in the loop to help mitigate any fires from happening,” he said. “There are things that could have been done differently — some things that the department can do — and we can learn from whatever mistakes were made to prevent anything of this nature from occurring again.”

Residents can help in that mission, he added, by not illegally dumping bulky waste on roadsides or near bins; by picking up litter; and by making sure to cover garbage as it’s being transported.

Now that Coxheath is closed, garbage should be taken to Pockwood Pond, and residents should follow specific instructions for disposing of waste, the manager warned.

“We keep telling people we can’t afford another fire,” Mr. Massicote said. “We really need people to follow instructions. It becomes clear that waste management can’t do this by itself. We need the community to play its role too.”