Financial services had best year since 2015

The territory’s financial services industry managed to weather a number of threats from abroad and finished 2018 stronger than the previous two years, as indicated by recently published fourth-quarter 2018 …

END_OF_DOCUMENT_TOKEN_TO_BE_REPLACED 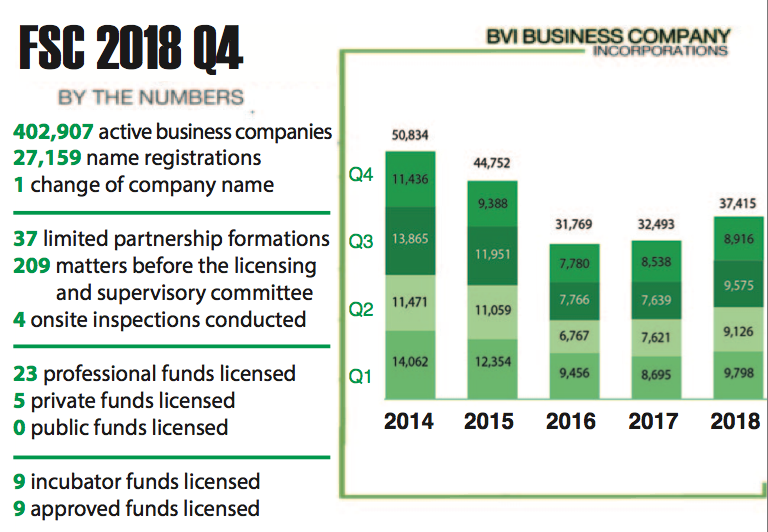 The territory’s financial services industry managed to weather a number of threats from abroad and finished 2018 stronger than the previous two years, as indicated by recently published fourth-quarter 2018 statistics.

Standard business company incorporations rose in the fourth quarter of 2018 when compared to the corresponding quarters in 2016 and 2017, though limited partnership formations fell in Q4 after a one-time spike, according to a statistical bulletin shared by the Financial Services Commission this month.

Incorporations — often viewed as a bellwether metric for the strength of the territory’s financial services industry — are up 15.1 percent over 2017.

“We are delighted to see that 2018 was a strong year for incorporations as more businesses and individuals chose to take advantage of the strategic and administrative benefits that our global financial centre offers,” said Elise Donovan, chief executive officer of BVI Finance, in a press release. “The noted increase in the quality business happening on-island is a reflection of the type of businesses and professionals making the BVI stronger.”

The industry saw growth despite confronting looming threats in the form of the United Kingdom’s public registers requirement and the potential for a European Union tax-avoidance blacklisting.

However, both those threats seem to have been partially mitigated for now: This January, UK officials announced that overseas territories won’t have to implement public registers of beneficial ownership until 2023. Virgin Islands government officials have vocally criticised the UK plan to require public registers before they become a global standard, but have applauded the extension to the UK’s previous implementation timeline of January 2020.

Late in 2018, though, the industry was still waiting to find out whether the economic substance legislation pushed through the House of Assembly late last year would satisfy the EU’s demands. In March, however, the territory breathed a sigh of relief when it was ultimately left off the blacklist of “uncooperative” tax jurisdictions.

Until now, the territory’s new limited partnership regime had been seeing a steady uptick with 31 formations in Q1 and 38 in Q2, followed by a sharp spike — nearly 200 percent — in Q3 with 114 new formations In a February press release, BVI Finance used these statistics to highlight the appeal of the new structure. But the most recent quarter was a different story — LPs dropped 67.5 percent that quarter, with a total of 37 formations, putting the number of formations closer to Q2 levels. Cumulatively, since the Limited Partnership Act was adopted in December 2017, 940 active companies have been formed under it. Another recent piece of legislation, the Trademarks Act, which was adopted in 2013, continued to facilitate new trademark registrations, which have jumped 61.11 percent since Q4 of 2017. So far, more than 900 new applications to register a trademark have been filed, according to the bulletin.