Firefighters responded to a blaze at an unoccupied house at Princess Quarters in Virgin Gorda 15 minutes after it was reported on Tuesday night, extinguishing the flames just after midnight …

END_OF_DOCUMENT_TOKEN_TO_BE_REPLACED 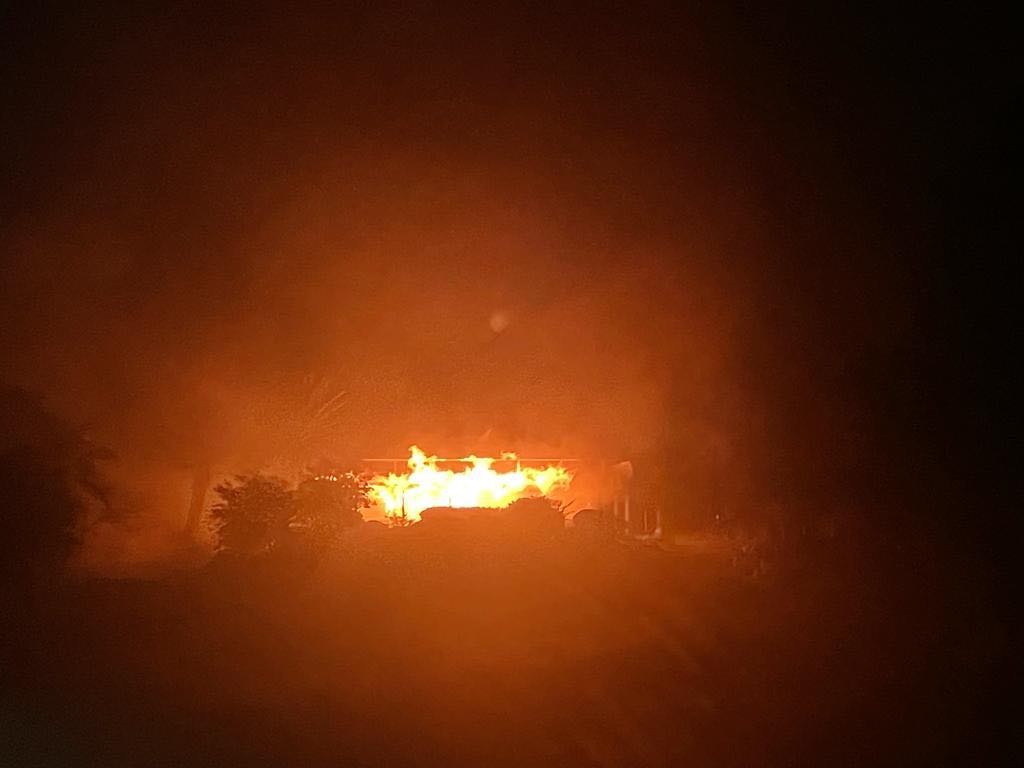 After a fire on Tuesday burned a house and car to ash, fire officers and government leaders commended the firefighters and other residents who faced the flames to prevent it from spreading further. (Photo: PROVIDED)

Firefighters responded to a blaze at an unoccupied house at Princess Quarters in Virgin Gorda 15 minutes after it was reported on Tuesday night, extinguishing the flames just after midnight with the help of community members who supplied water, dug trenches and pulled hoses, Chief Fire Officer Zebalon McLean said.

There were no injuries or fatalities, and nearby car was the only other piece of property destroyed by the flames, Mr. McLean told the Beacon on Wednesday.

“It was an incredible scene of unity and cooperation,” he added. “It was something to see.”

After receiving the first report at 8:20 p.m., firefighters from the Virgin Gorda Fire Station pulled up at 8:34 p.m., though they had to do “a bit of creative clearing” to reach the property quickly, Mr. McLean said.

“A fence or two might have been moved,” he added.

Following a temporary stand-down at 9:30 p.m. so that the officers could replenish their water supplies, a fire truck from the Taddy Bay International Airport joined the fight, creating a full complement of seven full-time firefighters and five part-timers, Mr. McLean said.

Their efforts were bolstered by other organisations, like Virgin Islands Search and Rescue and the island’s police, as well as private citizens doing what they could to put out the flames, according to the chief.

Dwight and Ricardo Flax donated their water truck; the Public Works Department used a backhoe to dig trenches to contain the fire; and residents helped the firefighters pull on the hoses so they could surround and quell the fire, Mr. McLean said.

By 10 p.m. the fire was under control, with everything completely out shortly after midnight, enabling the officers to return to their station at 12:45 a.m., Mr. McLean said.

Mr. McLean said it was too early to know what caused the fire, though he said two investigators were scheduled to visit the site yesterday.

As the fire burned on Tuesday night, Natural Resources, Labour, and Immigration Minister Vincent Wheatley urged nearby residents to prepare for evacuation and to stay away from Coppermine Road unless they were helping fight the fire.

Once the flames had died down, Transportation, Works, and Utilities Minister Kye Rymer commended the VG community for their bravery and camaraderie in conquering the blaze.

“I thank each and every member of the public who contributed to tonight’s success, no matter what your role was,” Mr. Rymer wrote on Facebook. “Tonight was a triumphant demonstration of the best qualities of Virgin Islanders: strong-willed, brave, helpful, united and caring.”