Work on the Road Town Fire Headquarters under a $332,000 contract issued on March 2 is on target to be completed by July, according to Transportation, Works and Utilities Minister …

END_OF_DOCUMENT_TOKEN_TO_BE_REPLACED 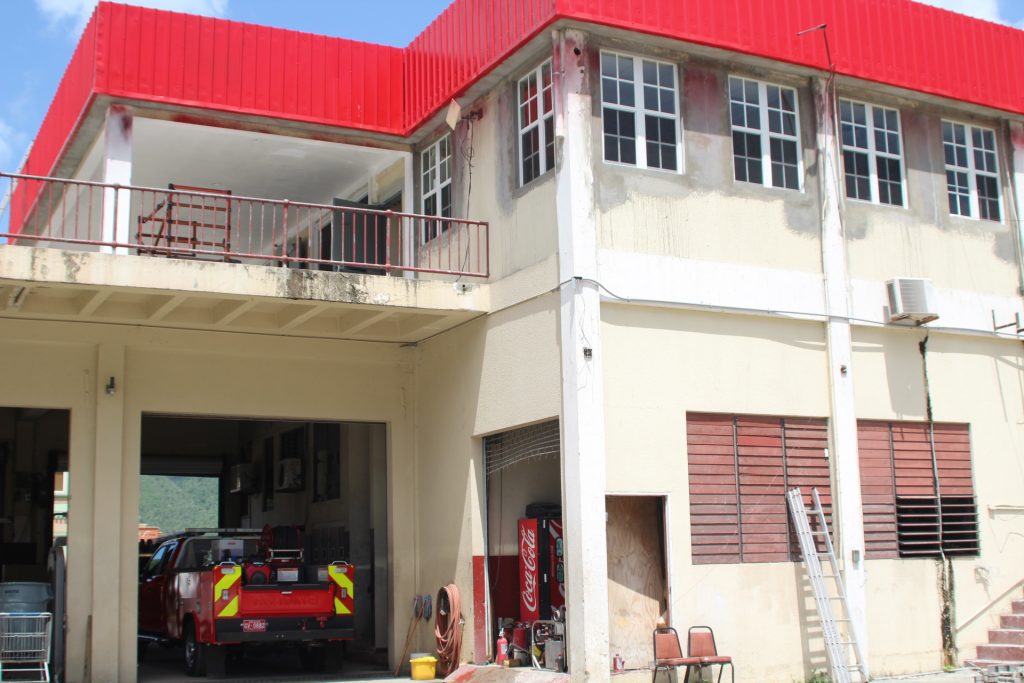 Renovations to the ground floor of the Virgin Islands Fire and Rescue Service Headquarters in Road Town are finally commencing after more than three years of delays. (File Photo: ZARRIN TASNIM AHMED)

Work on the Road Town Fire Headquarters under a $332,000 contract issued on March 2 is on target to be completed by July, according to Transportation, Works and Utilities Minister Kye Rymer.

The current project is the latest in a series of delayed repairs to the station, which was heavily damaged during Hurricane Irma.

Work on the second floor, which houses administrative personnel, was completed in 2019, Mr. Rymer told the House of Assembly on April 29.

On March 2, Metro Construction Ltd was awarded a $322,206.73 contract to renovate the facility’s ground floor, and the company started work on March 22, the minister said.

The works, he added, include demolishing and replacing existing floor and wall tiles, windows, doors, and electrical and plumbing fixtures.

Also included is a complete renovation of the “watch/com- mand room,” and installation of air conditioning, he said. “To date, the majority of the demolition works have been completed and the installation of windows has commenced,” he said on April 29.

The station’s ground floor, he added, is critical to the agency’s smooth functioning.

“First and most important, it houses the fire officers in the barracks that serve our community,” he said. “It is our intention to completely renovate the male and female barracks to ensure these officers have a comfortable working environment in which to work.

“Secondly, the ground floor holds all the equipment, apparatuses and material that support our fire officers, and we want to renovate these spaces to ensure the storage of these critical equipment and apparatuses are in a suitable environment.”

“It goes without saying that this room is vitally important to the ability of the Fire and Rescue Services to respond to emergency, and we will comprehensively renovate this space to include a new air conditioning system, new electrical wiring and fixtures, new cabinetry and countertops, and new wall, ceiling and floor finishes,” he said.

Government also has undertaken repairs to fire stations at Virgin Gorda, Jost Van Dyke and Anegada, according to the minister.

“These repairs include replacing windows and doors, painting, electrical and plumbing repairs, and finish- ing works,” he said. “My ministry is currently sourcing quotations for the procurement and installation of the roller shutter doors for the various fire stations, including Jost Van Dyke and Virgin Gorda.”