Senior Elmore Stoutt High School students will finally be back at their Road Town campus by the start of the next school year, officials promised last Thursday during a contract-signing …

END_OF_DOCUMENT_TOKEN_TO_BE_REPLACED 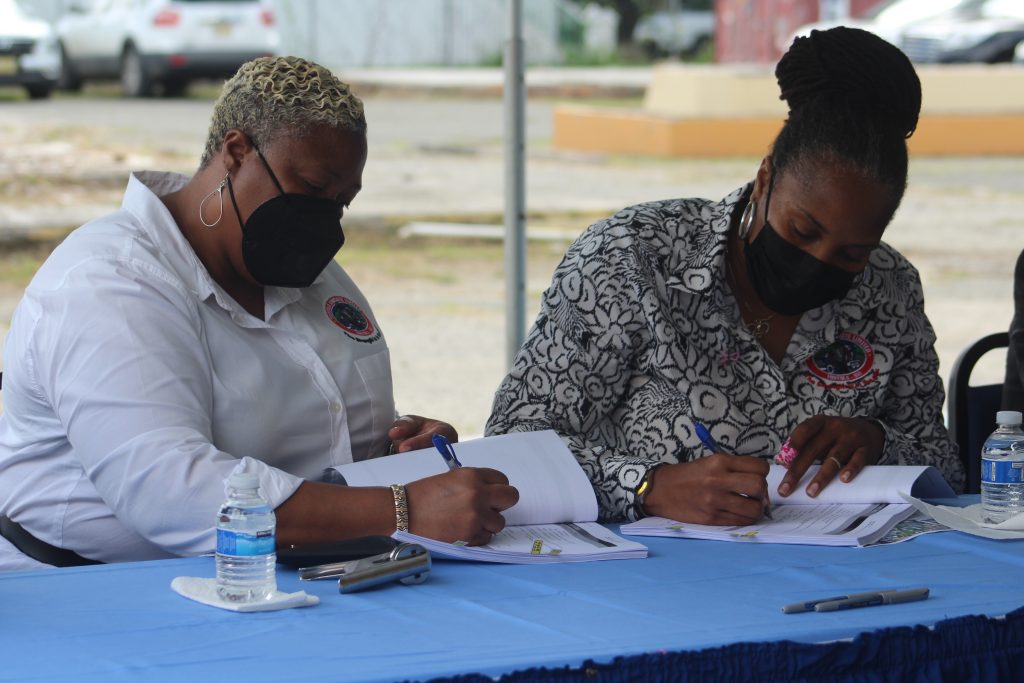 Contractors for the demolition and rebuilding of the Elmore Stoutt High School senior campus sign contracts during a ceremony. (Photo: ZARRIN TASNIM AHMED)

Senior Elmore Stoutt High School students will finally be back at their Road Town campus by the start of the next school year, officials promised last Thursday during a contract-signing ceremony that they said would kick off about $7 million of work to be carried out there in the coming months.

Contracts to demolish existing structures and design new classroom buildings were signed during the two-hour ceremony. Government officials, many of whom are also graduates of the school, said that more would come soon.

The first phase of demolition — for which Sand Wise Limited received a $136,079 contract — will start on Dec. 20 and last until Jan. 7, Premier Andrew Fahie said.

Work under a $99,480 design consultancy contract — which was awarded to Trojan Design and Development Limited — will begin on Dec. 2 and be completed by Jan. 14, he added.

After that, he said, the tendering for the buildings themselves will begin in order to have the project finished by September.

“Your government has already allocated just over $7 million for this initiative in the 2022 budget, and we are going to push and make this happen,” he said. “It is not money that we have to go to look for. It is already allocated.”

The project will include up to three buildings as high as three storeys, according to Neil Smith, the director of programme strategy for the Recovery and Development Agency.

Also included will be eight bathrooms, a principal’s office, an administration office, a staff lounge, and a staff bathroom, he added.

“We will have these buildings built for September 2022,” he said. “That is the mandate that the ministers have given to us.”

“These kinds of buildings will last sometimes 50, sometimes 75 years into the future,” he said. “And that’s very important that we do it properly, do it right; that we can ensure that it benefits the young people in the territory into the future.”

He called the initial contracts a step toward “serious infrastructure development” for the territory, but urged the premier to “get the real thing going.”

Mr. Fahie, in turn, called on Mr. Vanterpool to donate money to fund the school, and Mr. Vanterpool agreed to give $25,000. He added that his family has already budgeted $100,000 each year for the next five years to contribute towards education in the Virgin Islands.

Mr. Fahie added that the rehabilitation of the L-shaped building currently housing junior students at the campus was funded starting with donations.

“That is the same way we started when we were signing the rehabilitation of the L-shaped building, and the monies just started to trickle in,” he said. “That project that went from impossible to possible.”

He stressed the importance of using the “skills and expertise” of VI companies rather than looking abroad for help, and expressed his confidence in local contractors.

The contracts for the demolition and debris clearance and for the design consultancy services were tendered through the RDA.

An invitation to tender for the demolition contract was published in the Beacon, the RDA website and the Government Information Services website, according to RDA Procurement Officer Nioka Anderson Murray.

Representatives from 17 firms attended a site visit on Oct. 14, 2021, and nine tenders were received by the deadline date, Ms. Murray said.

Sand Wise Limited offered its services for $136,079.50, which was determined to be the best value for money, she added.

“They were recommended for award of the contract,” Ms. Murray said.

For the design contract, requests for proposals were sent to 10 local firms on Oct. 8, 2021 with a deadline for Oct. 29, she added.

“Five proposals were received by the submission deadline,” Ms. Murray said. “Following a preliminary and detailed examination of those proposals, Trojan Design and Development Limited’s proposal of the value of $99,480 was determined to offer the best value for money and they were recommended for award.”

Details of both contracts will be posted on the RDA’s website, she added.

“This breaking-ground ceremony is more than just breaking ground,” he said. “It’s breaking the chains of Irma and Maria and the destruction that they caused here in the Virgin Islands.”

Dr. Wheatley recalled attending the school himself many years ago, and defended the government’s work to refurbish the campus since 2017.

Dr. Wheatley said the government has put $4 million toward refurbishing the building since his party took office in February 2019.

He expressed his disappointment at bureaucratic processes that have slowed progress, and said that he is eager to get the project moving.

After the hurricanes, temporary classrooms were constructed at the former Clarence Thomas Limited building in Pasea and students attended classes in a shift system.

Now, senior students continue to attend classes in Pasea while junior students attend at the L-shaped building at the ESHS campus.

“We must admit that those are less than ideal conditions for our teachers and our students and our administrators to exist in,” Dr. Wheatley said of the Pasea campus.

He added that “sizeable” resources that are going toward the lease of the former CTL building will soon go toward the ESHS campus in Road Town once the senior students have moved back.

He also said that two of his children currently attend the school and that completing the project remains a priority for him so that they and their peers can have a good education.

Mr. Vanterpool recalled that during his school years, then Chief Minister H. Lavity Stoutt made secondary education a requirement for all students.

Before 1968, he said, students had to pass exams to attend high school, but only about a fifth of students passed those exams. Mr. Vanterpool himself failed his fifth-grade exams, he said.

“I ended up in post-primary school, which only went to seventh grade. Only 200 out of 1,000 were able to go to the secondary school at the time,” he said. “[Mr. Stoutt] believed that everyone should have an equal opportunity to a high school education.”

He said that both his sons went to the high school, went on to study abroad, and now hold top positions in banks here and abroad.

Health and Social Development Minister Carvin Malone — also a graduate of the high school — said during the ceremony that local contractors must continue to develop their skills.

He added that money that comes from loans like the Caribbean Development Bank loan should remain within the territory, but that local contractors must be experts in their fields to secure contracts.