A stream of walkers dressed in bright yellow made its way from Queen Elizabeth II Park to Noel Lloyd Positive Action Movement Park on the morning of Oct. 9. As …

END_OF_DOCUMENT_TOKEN_TO_BE_REPLACED 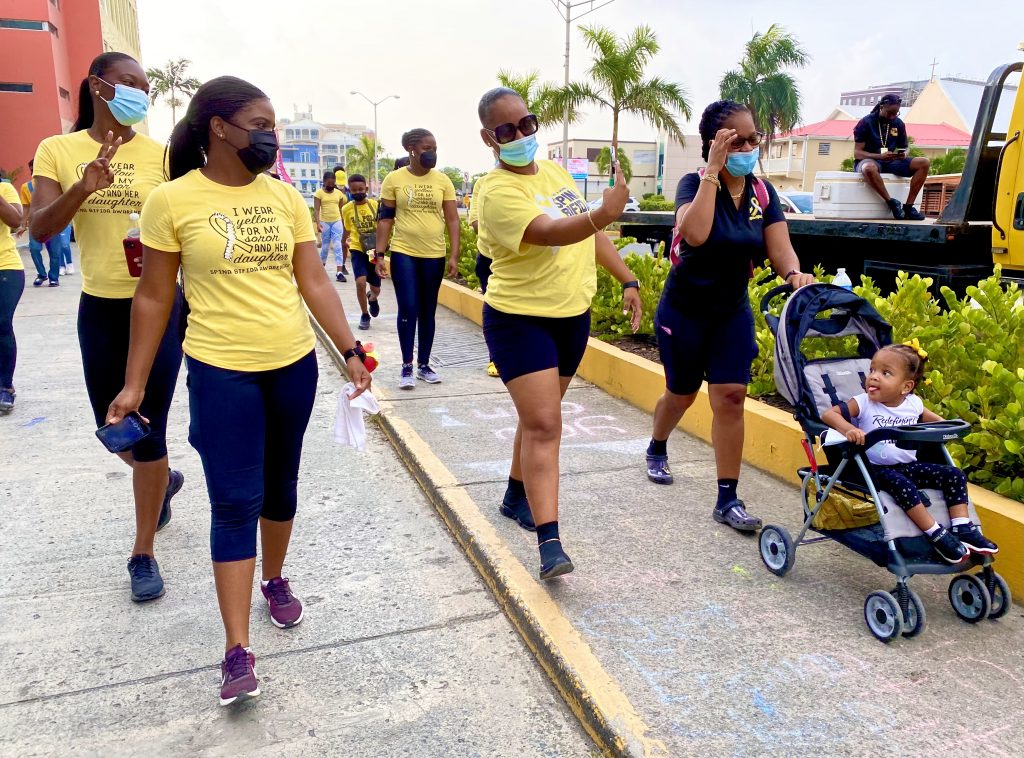 A yellow-clad parade made its way through Road Town on Saturday in support of Spina Bifida V.I. at its first annual awareness walk, with 2-year-old Zaia Grant leading the way. (Photo: DANA KAMPA)

A stream of walkers dressed in bright yellow made its way from Queen Elizabeth II Park to Noel Lloyd Positive Action Movement Park on the morning of Oct. 9.

As the procession moved through Road Town, participants waved at Zaia Grant and were met with plenty of smiles from the 2-year-old who inspired the creation of Spina Bifida V.I.

President Zubida O’Neal said she formed the organisation shortly after her daughter was born with spina bifida.

The condition typically affects people at birth when the neural tube doesn’t close all the way, potentially damaging the spinal cord and nerves.

“When she was born, her spine was outside her back,” Ms. O’Neal said, explaining that the condition affected her daughter’s mobility and caused water to collect in her brain. “It really affects your life in a way that we take for granted. But there’s so many ways to help out. I’m learning every day.”

Ms. O’Neal said she appreciates how through Spina Bifida V.I., she’s been able to connect with other residents who have the condition, and she is grateful for the support shown by friends and strangers.

At 2, Zaia is making good strides, her mother said.

“Although sometimes it might be hard, she’s very determined, and she wants to do all the things everybody else is doing,” she said.

Last year, Spina Bifida V.I. organised a balloon release to mark World Spina Bifida and Hydrocephalus Day, but Ms. O’Neal said this was the first year a walk was held to raise awareness. In the coming weeks, the group has also planned a bake sale on Virgin Gorda, a beach event on Jost Van Dyke, and a territory-wide day for everyone to wear yellow.

The activities will culminate in a brunch fundraiser at Irene’s Restaurant & Bar on Oct. 24, when she plans to announce how the money raised throughout October will benefit individuals with spina bifida.