With Virgin Islandsthemed balloons decorating tables, the territorial song playing from speakers, tarts and guavaberry rum being shared, and employees sporting T-shirts with popular sayings like “One hand can’t clap,” …

END_OF_DOCUMENT_TOKEN_TO_BE_REPLACED 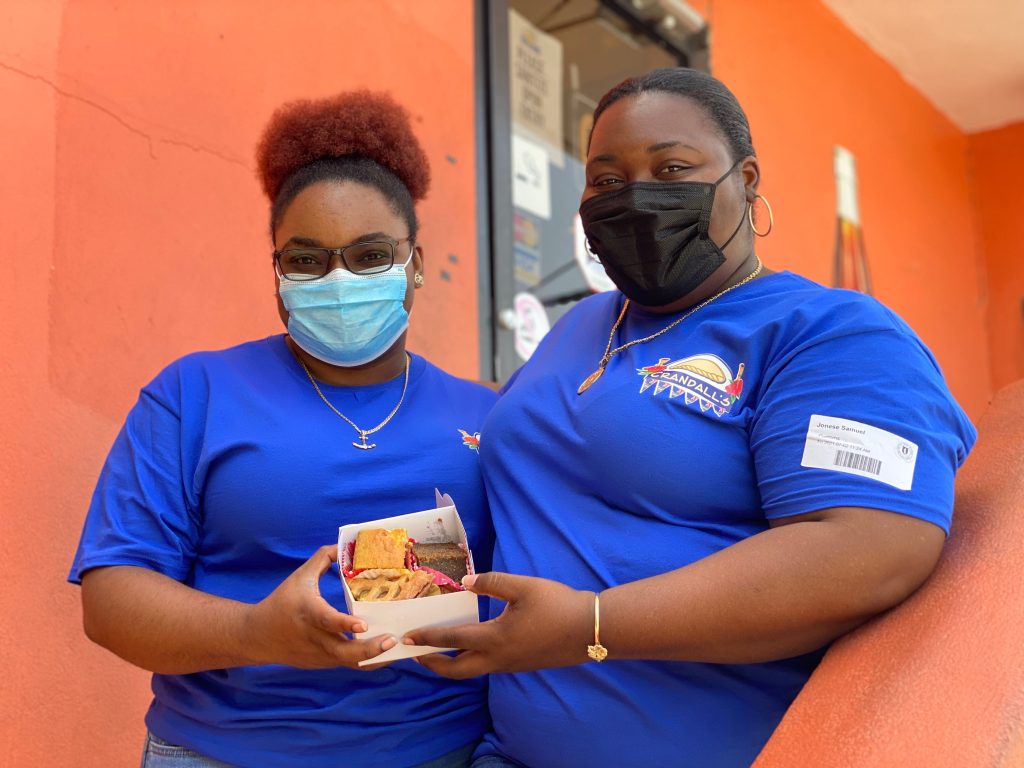 As part of their Virgin Islands Day celebrations, staff members at Crandall’s Pastry Plus welcome visitors with treat boxes and guavaberry rum while showing off the sayings on their new shirts, including “Soursop tree don’t bear apple. (Photo: DANA KAMPA)

With Virgin Islandsthemed balloons decorating tables, the territorial song playing from speakers, tarts and guavaberry rum being shared, and employees sporting T-shirts with popular sayings like “One hand can’t clap,” Crandall’s Pastry Plus joined in an early celebration of the first-ever Virgin Islands Day.

Assistant Manager Jonese Samuel said she and her mother Rosetta wanted to host a celebration this year for their customers considering it is a time to better recognise the history of the VI in its own right.

As Deputy Premier Dr. Natalio “Sowande” Wheatley explained in an address on the July 5 public holiday, the observance replaced Territory Day, which was known as Colony Day when it was first celebrated in 1978.

“The shift from ‘Territory Day’ to now ‘Virgin Islands Day’ reflects a renewed sense of national consciousness and represents an effort to assert our unique identity as Virgin Islanders,” Dr. Wheatley said. “It is a recognition that as Virgin Islanders that are a part of the Caribbean family, we have a distinct and separate culture and history that have shaped us to who we are today.”

Ms. Samuel said she was disappointed to see rising case numbers of Covid-19 just before the first celebration of the new holiday, but the situation only solidified her resolve to celebrate as safely as possible.

“There’s so much going on with Covid, we thought it would be nice to just have a day where you could come in and get something,” she said. “Every now and again, we try to have a little event to give back to our customers.”

When the new schedule of holidays was announced for this year, she said she appreciated the change.

“The renaming was nice,” she said, noting how it aligned with the business’s focus on traditional foods. “It was more prideful than Territory Day.”

She said it was especially difficult not being able to celebrate August Emancipation Festival as usual last year considering that many celebrants make a point of stopping into the shop to refuel for more dancing.

But she enjoys the memories, she said, and looks forward to more robust festivities this year or next.

Elsewhere in the territory, boutiques featured territorial wear, cooks shared photos of festive meals on social media, and families celebrated together at home.

However, larger events were limited by the recent spike in cases, and government cancelled its planned observance of Fishermen’s Day.

Nevertheless, Dr. Wheatley encouraged residents to embrace the meaning of the holiday.

Health and Social Development Minister Carvin Malone joined in the well wishes before offering an update on the Covid19 surge on Monday.

The United Kingdom Parliament shared in wishing the VI a happy holiday as well, flying the territory’s flag at Parliament’s main entrance on Monday.

Acting UK Representative Tracy Bradshaw of the London Office also was “very proud” to display the nation’s flag in the New Palace Yard, according to a press release.

VI Speaker of the House Julian Willock also weighed in.

“As we continue to foster relationships between the House of Assembly and the UK House of Commons, this is a step in the right direction in strengthening our partnership based on mutual respect for each other’s institutions,” he said. “We look forward to taking up the invitation in 2022 to visit London to raise the flag in person.”