It’s not often that several non-profit organisations have a chance to come together, but last Saturday volunteers networked during the territory’s first-ever Volunteer Week Fair. “Just knowing what else is …

END_OF_DOCUMENT_TOKEN_TO_BE_REPLACED 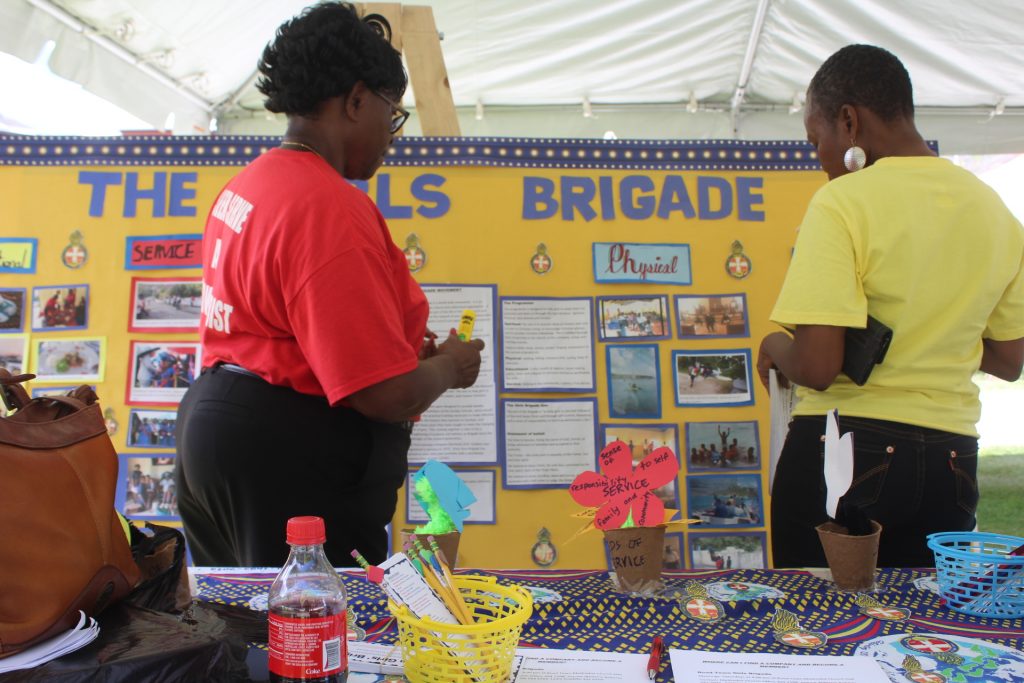 Girls Brigade representatives set up a display during the Volunteer Week Fair on Saturday at the Noel Lloyd Positive Action Movement Park. The organisation was among about a dozen that participated in the event. (Photo: ZARRIN TASNIM AHMED)

It’s not often that several non-profit organisations have a chance to come together, but last Saturday volunteers networked during the territory’s first-ever Volunteer Week Fair.

“Just knowing what else is out there, [our members] will know how to collaborate on different issues,” said Joann Williams Roberts, captain of the Road Town Girls Brigade. “There are unorganised ways of doing it, but the fair brought everyone in a central place.”

After receiving “great support” from the nonprofit community, organiser Kimberly Fraser said she will host the event again.

“Overall it went pretty well despite the rain in the morning,” she said on Saturday at the Noel Lloyd Positive Action Movement Park. “We had 12 or 13 organisations out here. They were just showcasing the services they have and the volunteer opportunities.”

Organisations like the Family Support Network and Mentoring Anointed Leaders Everywhere (M.A.L.E.) set up booths in the park, interacting with prospective volunteers and each other.

Ms. Williams Roberts said the event was really about “getting to know who else was in the service business.”

She saw members of the Girls Brigade going around to the booths, learning about different organisations and collecting numbers for further contact.

M.A.L.E. President Henderson Tittle hosted a discussion about the importance of volunteering.

“What is volunteering?” He asked listeners. “It’s offering your services freely.”

He encouraged attendees to find opportunities to contribute through schools, churches, local organisations, family and friends, or online.

His first piece of advice: Don’t be afraid to ask questions.

Throughout much of the day, local music played by a deejay filled the park, and there were drum, steel pan and dance performances as well.

The fair kick-started the territory’s first Volunteer Week, and activities continued this week.

Throughout the day on Monday, employees in several businesses wore t-shirts in support of volunteers.

On Tuesday night, there was a motivational session at the BVI Red Cross from 6-8 p.m. Wednesday’s Donation Day encouraged residents to pick a charity or other organisation to support through service or donations.

On Thursday night, nonprofits bowled against each other at Save the Seed Energy Centre. To wrap up the week, several nonprofits participated in the Queen’s Birthday Parade as they do each year.

Ms. Fraser said she was encouraged to start Volunteer Week in the Virgin Islands after seeing different events across the United States during a similar observance in April.

“I was looking to see if it was done at any other time,” she said. That’s when she found out that in the United Kingdom, Volunteer Week is celebrated from June 1-7. She decided to follow suit and started getting organised.

Though the effort was a lot of work, she said, it paid off to see the organisations together. As a lieutenant officer in the Girls Brigade and the founder of Alternative Community Transformation (A.C.T.), Ms. Fraser has been volunteering with the Girls Brigade for eight years, and has run A.C.T. for six years now.

“I myself have a nonprofit organisation and I have an interest and passion for community service and giving back,” she said.