After Hurricane Irma, the Virgin Islands’ scuba diving industry was in shambles. In the following years, stakeholders regrouped and thought about how they could operate better than they had before …

END_OF_DOCUMENT_TOKEN_TO_BE_REPLACED 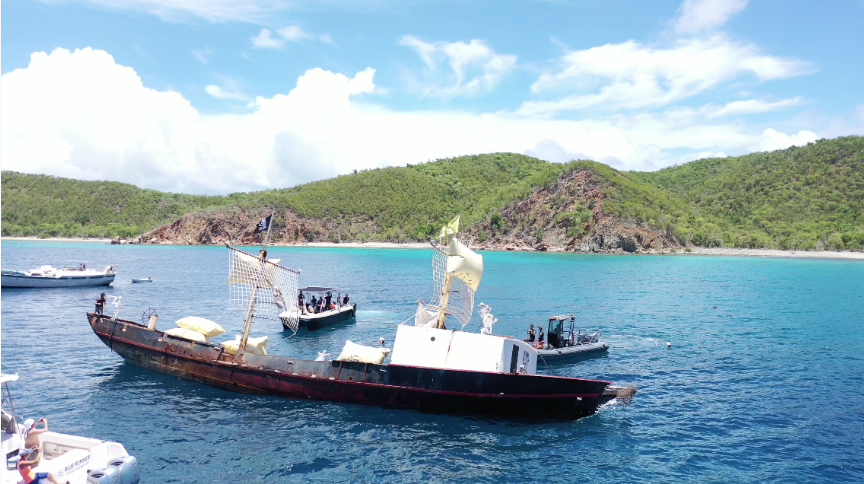 The Beyond the Reef crew sinks the old Willy T in August, creating one of the Virgin Islands’ newest diving attractions. (Photo: PROVIDED)

After Hurricane Irma, the Virgin Islands’ scuba diving industry was in shambles.

In the following years, stakeholders regrouped and thought about how they could operate better than they had before the storm, said Kim Huish, president of the BVI Dive Operators Association.

“The second year, which we’re into now, we started to lift our heads up and say, ‘How do we want to move forward? …How do we see our place in the BVI?’” Ms. Huish said.

Such are the guiding principles of the coming BVI Wreck Week, the first since the 2017 hurricanes rocked the territory.

Every day during the first week of December will feature events designed to foster interest, particularly amongst residents, in the Virgin Islands’ scuba sector, Ms. Huish said.

On Sunday, Dec. 1, for instance, prospective divers are invited to a meet and greet at The Moorings, where they can chat with representatives from different dive shops about how to get started in scuba.

Later in the week, on Wednesday, Dec. 4, residents can attend the ritzy Rhone Ball at Scrub Island, and on Friday, Dec. 6, Green VI is helping close out the week with a beach clean-up at Pusser’s at Myett’s in Cane Garden Bay, Ms. Huish said.

“We’ve been thinking about how we can give back to the community and enhance the diving product,” Ms. Huish said.

Dylan Penn, who grew up in the VI and works in the Town and Country Planning Department, is a long-time diver who has been wanting to wade deeper into the territory’s dive scene, he said. So he recently made a post on Facebook asking if anyone wanted to go diving, and soon after he amassed a WhatsApp group of more than 15 people.

The WhatsApp group includes “people who we didn’t know had their licences, people from all walks of life, all professions, [many of whom]got their licences probably when they were young but they haven’t refreshed in a while,” Mr. Penn said.

He and several members of the WhatsApp group recently dived the sunken Willy T, and in the future Mr. Penn hopes to turn this interest into a more organised operation that coordinates scheduled dives in various locations, he said.

Eventually, Mr. Penn wants to use recreational diving as an entry point for Virgin Islanders to enter the scuba diving and broader marine industries, he said.

Many residents do not know how to swim, which creates a significant barrier of entry for those wishing to become involved in aquatic sports, said Kendyl Bernā, who manages Beyond the Reef, a non-profit group involved with Wreck Week.

Specifically, Beyond the Reef plans to collect $5 from every diver who visits the sunkenWilly Tor “Sharplaneo” wrecks, and then donate that money to Unite BVI, which will use it for programmes that teach residents to swim, Ms. Bernā said.

While Beyond the Reef has partnered with Unite BVI, it is a separate organisation, and has thus far received the bulk of its funding from Commercial Dive Services, Ms. Bernā said.

Apart from involving a greater number of residents in the world of scuba, Ms. Huish hopes that Wreck Week and similar events can help elevate the diving industry’s standing in the territory’s economy.

While the revenue scuba brings in is small compared to the territory’s tourism product as a whole, an increase in tourist traffic to the dive outfits will in turn benefit the taxi services, restaurants, bars and hotels that enable visitors to access these dive companies in the first place, Ms. Huish said.

“We consider ourselves the cherry on top of the sundae of BVI tourism product,” she added.