Government has announced plans to install solar facilities on two primary schools, begin architectural and engineering services for repairs to the Road Town Police Station, and build a car park …

END_OF_DOCUMENT_TOKEN_TO_BE_REPLACED 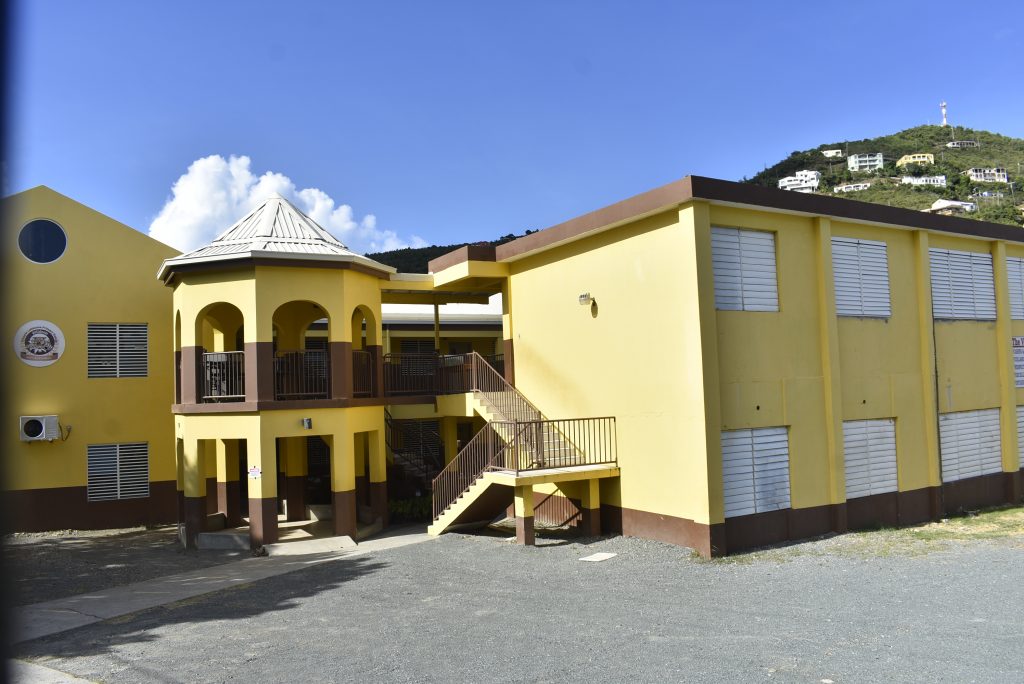 The Francis Lettsome Primary School in East End will be one of the recipients of a grid-tie solar power facility. (File photo: ZARRIN TASNIM AHMED)

Government has announced plans to install solar facilities on two primary schools, begin architectural and engineering services for repairs to the Road Town Police Station, and build a car park in Virgin Gorda, among other works.

Five contracts amounting to $446,661 were signed on Dec. 16 to start the projects, four of which will be funded by the United Kingdom’s Foreign, Commonwealth and Development Office to the tune of $273,901.

At the forefront of three of the contracts is the government’s pledge for a greener future.

“The mission is to transition the [Virgin Islands] to at least 60 percent green by 2035, and a very big part of this push is the switch to sustainable energy because the energy sector is one of the areas that contributes the highest to carbon levels,” Premier Andrew Fahie said during the contract-signing ceremony.

Governor John Rankin echoed the sentiments, stating that the contracts are for the future of the territory.

“The ones funded by the UK are for renewable energy projects which will contribute to the green agenda here,” he said.

The first two contracts were awarded to VI-based contractor Amandla Engineering for the supply and installation of two solar power facilities.

Amandla Engineering Director Nea Talbot stressed the commitment to renewable energy as an “exciting and viable path” for the territory.

“We’d like to highlight that we are involving the recent graduates of the H Lavity Stoutt Community College solar training programme in the work of these schools,” she added.

A third contract, for $95,900, was signed with UK-based Your Eco Construction Limited to design, build and supply two solar photovoltaic systems for the territory. The solar energy systems will be transportable so that they can be deployed where needed in the event of emergencies, officials said.

“We are well on our way,” he said at the ceremony. “My aim is to see every single government building within the next five years have some form of renewable energy, whether it be solar panels or small windmills. We must reduce our carbon footprint.”

Mr. Wheatley, who recently attended COP26 in Glasgow, said that as a territory, “we have to get really serious about what we’re doing here” for renewable energy. He added that the territory is “one of the most vulnerable” to climate change and must do its part in the climate crisis.

Deputy Premier Dr. Natalio “Sowande” Wheatley encouraged the public to utilise government’s duty-free initiative on solar products, which he said will be extended.

“As opposed to complaining about high energy costs and high fuel variation, how about we do our part and go green?” he said. “We have a renewable source of energy that will last till the ending of time, and we should make good use of it.”

Mr. Fahie said that the BVI Electricity Corporation has processed seven solar energy applications and that the territory currently has a grid-tie solar system of 300 kilowatts. There are four grid-tie systems — at BFEC, the Youth Empowerment Project, Leonora Delville Primary School and Guavaberry Spring Bay Vacation Homes in Virgin Gorda, he stated.

“We have an additional six customer applications currently being assessed with a combined system size of approximately 60 kilowatts,” he said. “The solar projects for which contracts were signed today promote the use of sustainable energy.”

Also at the ceremony, a contract was signed for architectural and engineering services at the Road Town Police Station, which was damaged in Hurricane Irma in 2017.

Phase One of the rehabilitation consisted of perimeter fencing, constructing walls, repairing floors and ceilings, installing windows and doors, and electrical works. This began in August 2019 and was completed in April this year, according to the Recovery and Development Agency’s website.

The new contract is to facilitate the Phase Two rehabilitation of the police station, but further details weren’t provided at the ceremony.

The $45,001 contract, which was awarded to OBM International, is funded by the FCDO, officials said.

OBMI Managing Director Marvin Flax said he was excited to see the opportunities ahead for the construction sector.

“Keep up these contract signings,” he told government officials. “It sends a strong message to the community that construction is alive and well; there’s work going on in the [VI].”

Mr. Rankin commended the contract, saying that it will contribute to the overall safety of the territory.

Lastly, a $172,706 contract to build a car park in Virgin Gorda and facilitate auxiliary works on the Jeffrey A. Caines Sports Arena was awarded to No Limit Construction.

The contract was the only one funded by the government, but it was the largest awarded that day. The premier said the sports facility was damaged in the hurricanes of 2017.

“Parts of the facility are rendered not fully functional,” he said. “[The area] comprises a covered sporting complex, a volleyball and basketball court, and a parking facility, all of which are used for regional, national and community-based activities.”

Rajah Smith, who said he has owned No Limit Construction for 20 years, thanked the premier for the opportunity.

“Throughout my 20-year journey, one of the things that has me going is the people that believe in me,” he said, pointing toward the premier before giving advice to others. “Anybody out there, if you start something, be committed and consistent and you’ll get there.”

The first five contracts were awarded through the RDA, according to RDA Director of Procurement John Primo.

Mr. Primo said that only one quotation was received for each of the first five contracts. Six companies responded to an invitation to tender for the last contract, which he said was awarded through local procedures