On Monday night, Shereeza Bipat-Richards wrote on Facebook about the numerous social media posts she had seen about residents running out of food and other supplies, losing their jobs, and …

END_OF_DOCUMENT_TOKEN_TO_BE_REPLACED 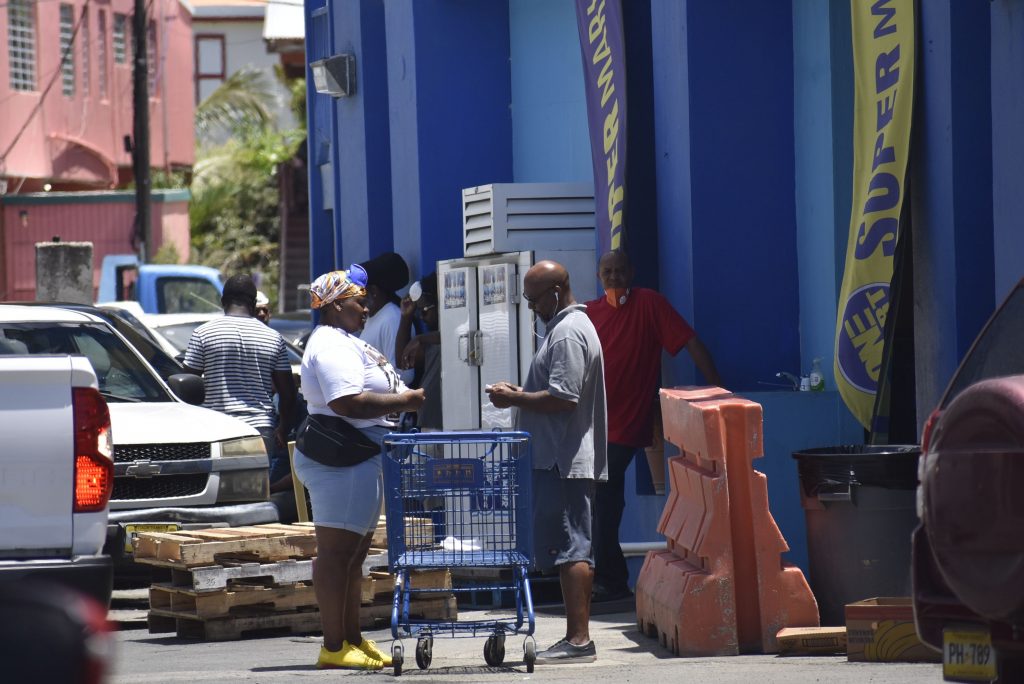 With the entrance to One Mart blocked to residents, a delivery driver shows an employee a shopping list in order to do essential shopping for those who placed online orders. (Photo: CLAIRE SHEFCHIK)

On Monday night, Shereeza Bipat-Richards wrote on Facebook about the numerous social media posts she had seen about residents running out of food and other supplies, losing their jobs, and struggling to get what they need from the delivery system that government implemented this week.

“The government said not to panic, fair enough,” she wrote. “We are in a crisis. We are in a pandemic. … At the end of the day, people will worry about the high level of uncertainty which is manifesting from the extended lockdown.”

Previous plans to gradually reopen the economy this week abruptly changed over the weekend after a Covid-19 patient died and a fifth case tested positive.

With many residents running low on supplies after being locked down for as many as 17 days, leaders announced plans on Saturday to extend the lockdown at least through this week.

Grocery stores, pharmacies and other essential businesses would remain closed to the public, they explained, but a two-pronged effort would allow residents to stock up: Free food and essential supplies would be provided to needy residents, and deliveries would be allowed for residents who can afford to pay.

“During the extended curfew period, no one under my watch as premier and minister of finance in this territory will go hungry,” Premier Andrew Fahie promised on Sunday.

By the next morning, however, many residents were questioning whether this was true, with mothers calling for food for their babies, others asking for medicine, and major grocery stores delaying orders.

“So many people out there need food. How can the government make this all simplified?” asked boat captain Darren Fry. “I’ve tried using the internet for all of my potential routes forward and every one I’ve tried failed. … I’ve also contacted the emergency relief. I’ve also tried the delivery services people. They’re not answering their phones, so I just don’t see how people are able to do this.”

The aid programme that provides free food to needy residents is being funded through a $2 million injection from government’s consolidated fund, officials said.

“I want to reassure you that all people will have access to basic essentials during this time,” Governor Gus Jaspert said during a live Facebook broadcast that started shortly before midnight on Saturday. “Over the next week, the majority of people will be expected to order any essential food [and] basic needs by calling or submitting online deliveries from many shops for home delivery. Many of the food supply shops have set up arrangements through telephone orders and a network of delivery services is in place. … For those who are not able to access online shopping, are vulnerable or unable to pay for their basic needs, you will be able to register to get an essential supply package.”

Grocery stores, he added, would be permitted to operate on a 24-hour basis but to deliver only during daylight hours.

“This, as I am sure you can imagine, is a massive under- taking for government, so we will be operating the system with the support of public officers and volunteers,” Mr. Jaspert explained.

Mr. Fahie elaborated on Sunday evening, announcing the “Territorial Provisioning Logistical Plan,” which allowed Deputy Governor David Archer Jr. to redeploy public officers to assist with the food need hotline and other services. A command centre to take incoming calls for assistance was set up alongside an approval hotline.

A website was also launched to allow residents to register by answering questions to determine how many adults and children are in the household, and if anyone there has lost employment recently.

Along with other officials, Mr. Archer coordinated efforts based out of the Ralph T. O’Neal Administration Complex on Monday, and on Tuesday afternoon he was directing volunteers and public officers in front of Rite Way Food Market in Pasea, where workers loaded packages into a trailer for distribution.

The overall goal, he said, was to produce 3,500 full-relief grocery packages, which included dry goods, fresh produce, cold and frozen items, and cleaning and sanitary supplies.

“I applaud the Rite Way folks who were working 18- to 24-hour shifts,” he said. “Rite Way is doing their best with a tough situation.”

Two heavy bags per household were distributed, plus a case of water, according to Kareem-Nelson Hull, who spent Tuesday delivering the packages. He noted surprised faces of residents when the packages came to their doorsteps.

Mervin Hastings, a contributor to the BVI Community Board Facebook group, noted that he heard from individuals who needed food items and received “ample and sufficient” items.

Government has said that families in need will receive priority. However, many residents in need complained that they were being overlooked.

“What provisions are made for pregnant women?” asked a Facebook user posting under the name Mohogany Phillips below a government post showing truckloads of food being distributed. “I have been on the phone all morning trying to get at least a delivery company to get some basic supplies… nothing!”

Separately, an army of deliverers got the green light last week to start bringing supplies to residents who wished to purchase an order from supermarkets or other stores. This effort was also met with mixed reviews.

Some residents who placed online orders to supermarkets on Saturday are still awaiting their orders. Others have been served.

One resident said he received his order from Rite Way on Tuesday after placing it on Friday, and although about 25 percent of the ordered items were missing, he is grateful to have food.

The delivery effort began last week as markets prepared for a gradual re-opening of the territory. But after government announced another six days of lockdown on Saturday, most residents realised that deliveries were their only option.

On Sunday afternoon, both One Mart Supermarket and Rite Way closed their online ordering platforms after facing a high demand of orders, and both platforms have provided no more than limited access to the public since.

“We have reached our order capacity for today,” One Mart noted on social media on Tuesday evening. “The online store is closed until further notice. As usual we will make an announcement via our social media channels, and the website.”

As of yesterday afternoon, the Rite Way platform was also closed until further notice.

However, some residents said they received their orders.

Ysanna Cherish John posted a thank-you note on the BVI Community Board Facebook forum to One Mart and Deliver VI around noon on Monday after receiving her groceries.

She placed the order on Sunday morning, and received a waiting number of 541, she said. However, others noticed her post and replied that their number came before hers and that they hadn’t received their orders.

On Tuesday evening Lani Dabreo posted, “Feeling like by the time I get the order I paid hundreds of dollars for days ago, I’ll by then starve to death.”

Several delivery services have ramped up in the past few days, including Tortola General Services, Flex, Deliver VI, Eddies Delivery Service, and Deliverance BVI. Some charge fees anywhere between $5 and $40, depending on the location of the household and the size of the delivery.

Smaller grocery stores, bakeries, and other businesses stepped up to the plate as well, with many offering free delivery of their goods.

In Baughers Bay, Plaza Mini Mart uploaded pictures of all its aisles including shipments of fresh produce, and said it was ready to deliver items. Relish, Grape Expectations, 5 Girls Home Centre, Nature’s Way, and C&D Supermarket also ramped up their capacity to deliver and take online or phone orders.

Lyn Sorrentino said her experience with smaller shops has been “great so far.”

“We ordered Caribbean Cellars and got it the next day,” she said. “Deliver VI, same thing, and French Deli, all great. We’re still waiting on Frozen Imports from day before yesterday.”

Others who ordered from Caribbean Cellars reported having their orders delivered speedily and with customer service. Jen Gress used BVI Spring Water and Pet Planet to deliver supplies for her animals and noted that both had “phenomenal service and delivery times.”

Meanwhile, some fishers have been allowed to use their boats to catch fish.

“We have also taken measures to ensure that we can boost our fresh food supply,” Mr. Jaspert added in his Saturday night statement. “Therefore commercial farmers, once approved, will be able to deliver their produce; and a limited set of commercial fishing will be approved.”

On Monday, Thomas Warner on Jost Van Dyke thanked the premier and Second District Representative Mitch Turnbull for “fresh fish on the stove tonight.” The night before, he had requested that fishermen be allowed to go out, set their traps, and deliver fresh food to residents.

Many farmers are also allowed to deliver. Tidal Roots Farm and Full Belly Farm both stopped taking orders after an influx of requests, and Good Moon Farm posted its latest batch of deliveries on Monday.

Joey Waldinger contributed to this report.