The BVI Food Fete officially got under way last Thursday night at the Scrub Island Resort and Spa, where Virgin Islands chefs served plates at the Gourmet Soiree. The event …

END_OF_DOCUMENT_TOKEN_TO_BE_REPLACED 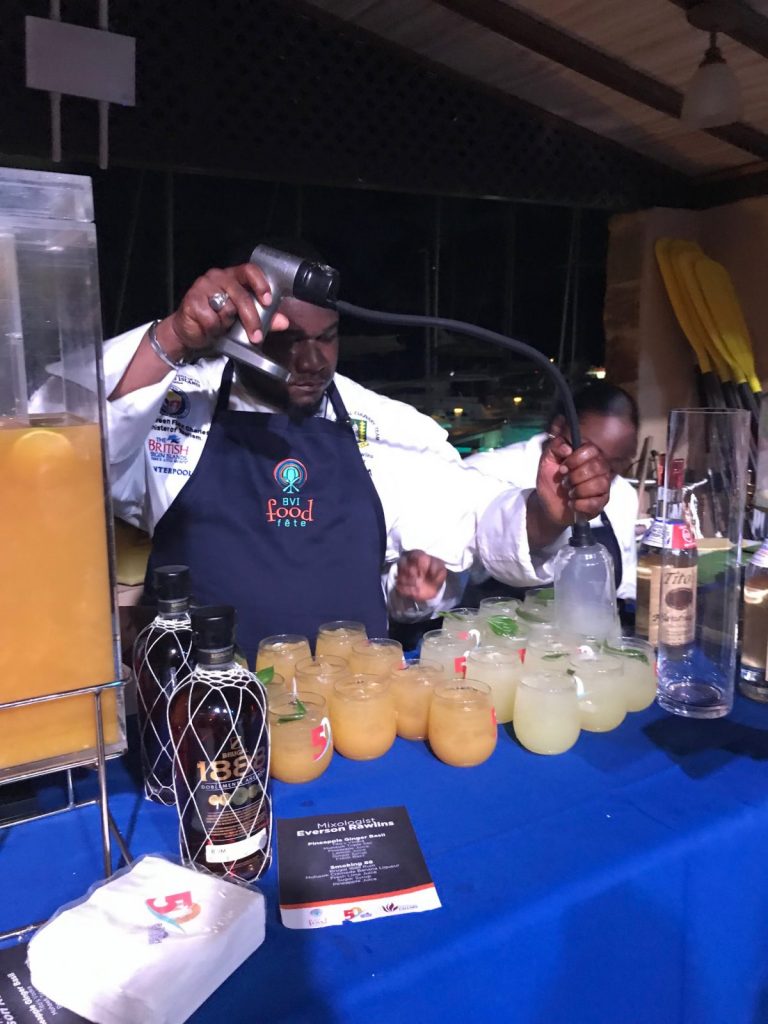 Everson Rawlins uses a blowtorch to put the finishing touches on a pineapple, ginger and basil cocktail at the BVI Gourmet Soiree. Photo: CLAIRE CHEFSHIK

The BVI Food Fete officially got under way last Thursday night at the Scrub Island Resort and Spa, where Virgin Islands chefs served plates at the Gourmet Soiree.

“It’s our first time at Scrub Island hosting this,” Ms. St. Cyr said. “We’re very excited about being a host and a major sponsor. It’s an amazing opportunity to showcase local talents, local products. It’s been many chefs in the kitchen working together, swapping ideas, and tasting each other’s food, which is always really exciting.”

For the past six months, she and the other chefs have been preparing for the soiree, she said, adding that they’ve kept “constant communication” with the BVI Tourist Board throughout that time.

The party started around 7 p.m. as guests arrived in Trellis Bay, where they were escorted to Scrub Island via ferry.

Donned in cocktail attire, they sampled dishes prepared by the chefs at different stations and sipped signature cocktails and wines.

Live music by the Razor Bladez entertained guests, and welcome remarks were given by BVI Tourist Board members and Miss BVI Bria Smith.

Robin and Rebecca Willows, chef and captain at The Moorings, were enjoying the display of local talent.

“We heard about this event through word of mouth,” Ms. Willows said. “We’ve got our guests on our boat here tonight.”

Dinner and dessert were served across Scrub Island as guests were carted to the north beach, where another party area was set up around the bar and pool area.

They were gifted with a reusable bag and flip-flops suited for the sand with the words “BVI Food Fete” printed on them.

This year, the BVI Tourist Board is celebrating its 50th anniversary, and a cake commemorating the occasion was also served for dessert.

Along with a full service bar and live music, a fire pit on the beach kept burning as guests danced the night away before returning to catch the last ferries.

The culinary action continued at Taste of Tortola on Saturday night at the Queen Elizabeth II Park.

Local restaurants, food vans and cafes participated in the event, as did some of the chefs who were featured at the Soiree.

Attendees who paid $25 to enter sampled fare that ranged from chicken wings from Yo Mama’s Kitchen to gourmet offerings with a VI twist such as mini johnnycakes and oxtail ravioli.

On the edge of the show — near a drink tent serving mojitos and other cocktails — chefs gave various cooking demonstrations throughout the evening.

Among them was Jolece Fraser, a member of the national culinary team who recently brought home a medal from the Taste of the Caribbean competition in Miami.

After introducing herself to a cheering crowd, Ms. Fraser started off her demonstration by putting cassava balls into an air fryer.

“Cassava has been in the BVI’s history for as long as anyone can remember,” she said.

She then gave step-by-step instructions on how to prepare the cassava with fried fish.