At the Cruzan stand, rum was cut with a splash of passionfruit nectar and a spritz of mango bitters, the end product a drink inspired by the Sunshine Killer Bee, …

END_OF_DOCUMENT_TOKEN_TO_BE_REPLACED 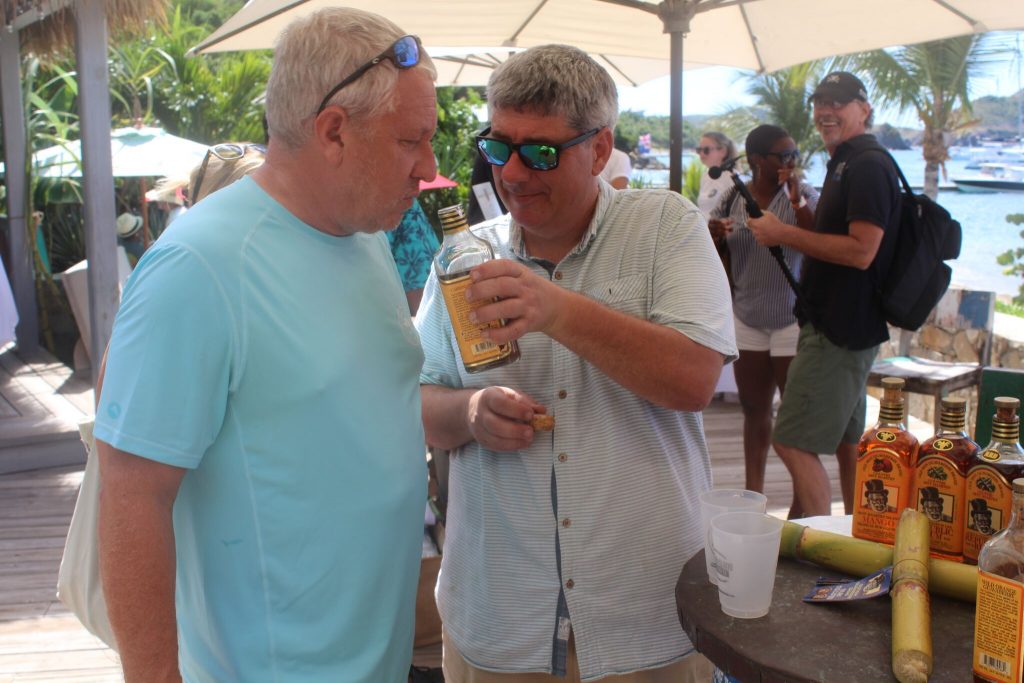 Nigel Keegan offers up a whiff of rum during the Cooper Island Rum Fest on Saturday (Photo: JOEY WALDINGER)

At the Cruzan stand, rum was cut with a splash of passionfruit nectar and a spritz of mango bitters, the end product a drink inspired by the Sunshine Killer Bee, a popular recipe in Nevis.

Over by the barrels from Foursquare Premium Distillery, a Barbados-based operation, visitors were given samples of different rums aged for almost a decade in sherry and bourbon casks.

The offerings were among the samples available on Saturday at the Cooper Island Rum Fest, where distributors from distilleries across the Caribbean whipped up fruity drinks and doled out free shots of some of the region’s finest spirits.

“I’ve heard great things about Cooper Island,” said Charley Child, explaining what drew her to the festival, which is part of the BVI Food Fete organised by the BVI Tourist Board.  “It’s a rum festival and we love rum. ”

Ms. Child’s experience at Cooper Island was overwhelmingly positive. She praised the food— the selection ranged from crispy saltfish cakes to skewers stacked with grilled chicken and sweet peppers — as well as the friendliness of participating vendors.

“The service is really nice,” she said, adding, “When you go up to a stand they tell you about the rum.”

Ms. Child offered only one critique: She thinks the festival could have been better advertised.

Her friend Isabel Bwan added, “They should do this more often.”

Buzzing from morning until afternoon, the resort was crowded with an eclectic mix of people, from a group of friends celebrating a birthday — easily discernible by their funny hats and Mickey Mouse ears — to families with sunscreen-slathered young children.

Many of them came aboard a public ferry to the festival that was offered for the first time this year.

Walking amongst the hum of conversations, laughter and live music, Meron Napier, operations manager at Cooper Island Beach Club, said that it felt “amazing” to see all the hard work of planning the event pay off.

“All the vendors, all the businesses, all the resorts: They know how much logistics it takes to try to put an event like this together,… and when you kind of turn around and you see everyone doing their thing and having a good time, you just relax,” she said.

On Sunday, Jost Van Dyke’s White Bay had a similar energy, with pop music blaring from the speakers at Soggy Dollar, setting the soundtrack for games of cornhole and the masses of people soaking in the turquoise water with a drink in hand.

For the Jost installment of the Food Fete, Soggy Dollar was serving up a pork taquito, with strands of pork wrapped inside a thick, doughy roll, its edges fried to a crisp.

Along with a side of potato salad and a miniature painkiller, the plate cost $8.

A twist on the roast pork and jerk pork recipes customary in the Caribbean, the dish was intended to please the bar’s tourist clientele while offering residents a variation on a regional classic, said Renee Singh, kitchen manager at Soggy Dollar.

Restaurant staff marinated the pork for four days prior to the festival, coating it with Old Bay seasoning, orange peels and plenty of garlic, Ms. Singh said.

“We just wanted to do something different this year,” she added.

While the dish proved popular, it had little to do with the Food Fete itself, Ms. Singh said.

Most of the orders for the taquito came from cruise ship passengers and other tourists —customers who line the beach’s sand every Sunday, regardless of special events, Ms. Singh said.

Great Harbour was much quieter, and at around 3:15 p.m., Corsairs Beach Bar & Restaurant was mostly empty.

Owner Vinny Terranova spent all of Saturday smoking the pork he intended to plate and woke up early Sunday morning to get everything ready, but people didn’t start trickling in until around 1 p.m., he said.

Shortly after 3 p.m., business was so slow that Mr. Terranova had stored away the pork he had cooked the day before, but he was quick to serve a few slices of thick, tender pork belly with homemade baked beans.

“It’s like we threw a party and nobody came,” Mr. Terranova said, adding, “We were ready.”

The owner said he learned about the festival only six days earlier, when a Tourist Board representative visited his establishment and asked him to put a special on his menu pairing a drink with some sort of pork dish for under $10.

He felt that the Tourist Board did not do a sufficient job of advertising the event, which he said hurts establishments less popular among tourists.

Noting that the last ferry to Tortola leaves at 5 p.m., Mr. Terranova also suggested that running a nighttime ferry service could boost profits for some of the bars and eateries on the island.