Local News > Food Fete ‘Dine Out’ kicks off on Tortola

Food Fete ‘Dine Out’ kicks off on Tortola

Dozens of people sat across ten tables set up outside Seven at the Pier, watching a live demonstration by chef Radiance Modeste during Dine Out Tortola on Friday evening. “You …

END_OF_DOCUMENT_TOKEN_TO_BE_REPLACED 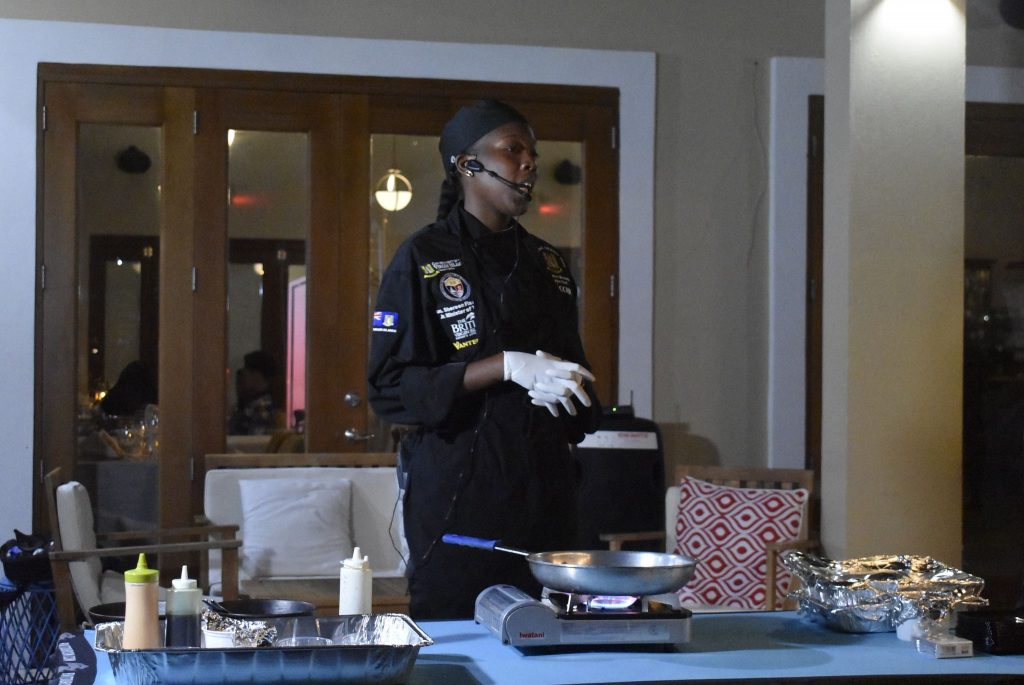 Chef Radiance Modeste hosts a live demonstration cooking a tropical chicken empanada cup with avocado aioli, finished with a sweet roasted red pepper oil and microgreens. The event at Seven at the Pier on Friday was one of several live demonstrations by the BVI National Culinary Team throughout the BVI Food Fete Dine Out. (Photo: ZARRIN TASNIM AHMED)

Dozens of people sat across ten tables set up outside Seven at the Pier, watching a live demonstration by chef Radiance Modeste during Dine Out Tortola on Friday evening.

“You just let it simmer in the sauce for a while and then take it off the heat,” Ms. Modeste said while cooking a tropical chicken empanada cup with avocado aioli, finished with a sweet roasted red pepper oil and microgreens.

The crowd cheered on Ms. Modeste as she explained how to make her dish.

The same evening, there was another demonstration at the nearby Coconut Lounge, where chef Zhanae Christopher cooked fungi as a cake topped with seared shrimp and mango, along with polenta chips.

“We have something more familiar with the fungi cake,” she explained. “You have that softness but it’s a little crispy on the outside. You got something a little bit different from the polenta chips. It’s very thin, very crunchy. We have a little bit of jerk seasoning on it.”

The 22-year-old currently works at Maria’s by the Sea as a chef and assistant events manager. She said the turnout was higher than expected and she was pleased to hear that the guests enjoyed their experience.

“She elevated fungi to the next level,” said Eno Soman, one of the guests.

Ms. Christopher said hearing such feedback is the best part of cooking.

“Nothing is better than when somebody tells you that something that you made really touched them in their heart and in their mouth,” she said. “It’s very warming to see that despite the challenges that people are still willing to come out and support the local culinary team, and just enjoy and forget about their worries for a little bit and celebrate what BVI Love is all about it.”

As part of the BVI Food Fete, Dine Out Tortola kicked off the series of weekend Dine Out events running from Nov. 20 to Dec. 13. The month-long promotion is designed to support and showcase local restaurants and chefs, according to the BVI Tourist Board.

“As a result of the Covid-19 global pandemic, this year we were forced to reconceptualise our annual BVI Food Fete celebrations,” BVITB Director Clive McCoy said in a press release. “Considering that mass gatherings are one of the proven vehicles for the spread, we have adapted a new approach which allows for the promotion of participating restaurants and encourages patrons to dine around.”

Participating restaurants showcased prix fixe menus last weekend, and will continue to do so throughout the month-long series.

Members of the BVI National Culinary Team, like Mses. Modeste and Christopher, are making guest appearances at the events, providing live demonstrations and free samples.

Over the past weekend, guests were also invited to East End for a live demonstration by chef Jolece Fraser at Loose Mongoose on Saturday and at Harbour View with chef Jadiel Gibson on Sunday.

The next event will be on Anegada, coined “Dine Out Anegada: Lobster Edition.” After that will follow Dine Out Virgin Gorda.

For more information go to bvifoodfete.com.