When BVI Tourist Board officials began discussions about hosting the sixth annual BVI Food Fete this year, they faced a tough decision, according to BVITB Chairwoman Kenisha Sprauve. “When the …

END_OF_DOCUMENT_TOKEN_TO_BE_REPLACED 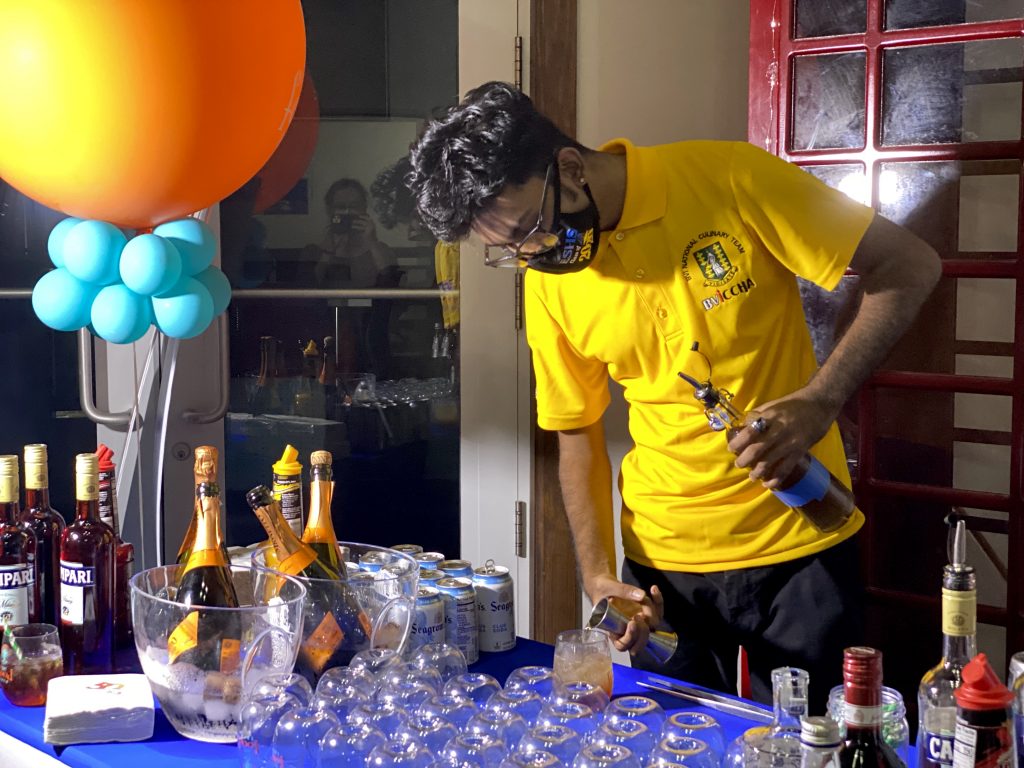 Mixologist Enrique Jafarally whips up a BVI Love Cocktail, the flagship drink for the BVI Food Fete 2020, a month-long celebration of Virgin Islands cuisine organised by the BVI Tourist Board. The event series, which this year is focused on dining out, launched on Sunday at Coconut Lounge. (Photo: DANA KAMPA)

When BVI Tourist Board officials began discussions about hosting the sixth annual BVI Food Fete this year, they faced a tough decision, according to BVITB Chairwoman Kenisha Sprauve.

“When the occurrence of Covid-19 seriously challenged this year’s staging of the BVI Food Fete, the board of directors asked our team of professionals at the BVI Tourist Board to consider this an opportunity to showcase our culinary legacy in an unconventional manner,” Ms. Sprauve said. “The team rose to the occasion, and came up with a concept that would work within the parameters of our many protocols in effect with our food and beverage sector.”

The result was this year’s “Dine Out” theme, which was unveiled on Sunday at the Coconut Lounge.

Among signature cocktails and Virgin Islands-inspired cuisine, BVITB officials answered questions about various topics: the new format for the Anegada Lobster Festival, how community members can support local business, and some of what to expect with the border reopening on Dec. 1.

She added that the board will “aggressively promote participating restaurants” to community members and tourists during the border reopening, celebrating the VI as a premier culinary destination.

Though typical events like Taste of Tortola, the Cooper Island Rum Fest, and the Jost Pork & More Fest will be absent this year, culinary experts will showcase their talents at different locations in the VI every weekend until mid-December, she said.

Tortola’s Dine Out celebration started Friday and runs through today. Patrons can enjoy special dishes prepared by the BVI National Culinary Team at each of the Dine Out events at select venues.

On Sunday at the launch, members of the culinary team offered a snapshot of what was to come with small plates of curry chicken-filled Johnny cakes, jerk-seasoned shrimp on a crispy cassava cup, and a Painkiller-inspired dessert.

Dine Out Anegada — which promises to feature numerous lobster-based dishes — is scheduled for Nov. 27-29. Dine Out Virgin Gorda is planned for shortly after the border reopening, from Dec. 4-6, and Dine Out Jost Van Dyke will be held following weekend, wrapping up the Food Fete. More scheduling details are promised soon at www.bvifoodfete.com.

Under the new “Dine Out” theme, participants are encouraged to make a reservation with establishments that are offering pre-fixed menus instead of hopping from restaurant to restaurant to sample different dishes and entertainment.

She added that the Dine Out events will also allow restaurants to practise carrying out the new protocols ahead of the border reopening.

Tourism Director Clive McCoy explained that the culinary team will visit different locations in the territory every weekend through Dec. 13.

“The National Culinary Team has been a crucial part of our Food Fete since its inception, and they are the ones that help tell the story of our territory’s cuisine,” he said. “It is that creativity that is going to allow the BVI to be a leading destination in the world from a culinary perspective.”

He added that support for VI food and drink establishments is needed more now than ever, and the Dine Out events will be a boost for those businesses at affordable prices for patrons.

While speaking, Mr. McCoy raised a glass of the signature BVI Love Cocktail to toast to the upcoming festivities.

The creator of the cocktail, Everson Rawlins, the lead mixologist for the culinary team, said he was glad to participate in the launch and help lift up VI restaurants and suppliers. He added that the cocktail was inspired by a cross between an Aperol spritz and classic Negroni.

He said times are tough for community members working in the hospitality sector right now, but he encouraged fellow bartenders to get creative and hone their skills in anticipation of busier days to come.

The evening concluded with a performance by the Razor Bladez fungi band.