Various relief supplies have been distributed in East End since Hurricane Irma, but at times they have been slow in coming or have run short, according to Eighth District Representative …

END_OF_DOCUMENT_TOKEN_TO_BE_REPLACED 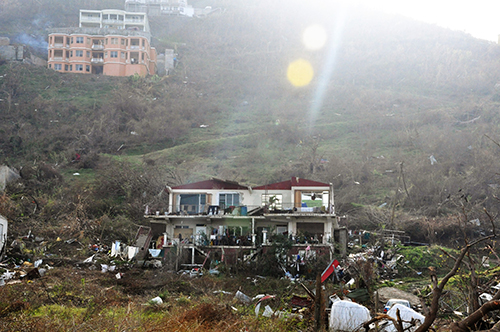 Like most of the territory, East End, one of Tortola’s main population centres, suffered extensive damage in Hurricane Irma. Now its supermarkets have yet to reopen, and food relief is in short supply. Photos: FREEMAN ROGERS

Various relief supplies have been distributed in East End since Hurricane Irma, but at times they have been slow in coming or have run short, according to Eighth District Representative Marlon Penn.

As of Monday evening, for example, the East End community had run out of foodstuff relief supplies, Mr. Penn told ZBVI that day.

Mr. Penn explained that supplies were disseminated at the Elite Superette distribution centre over two sessions.

“All the supplies that came into the centre were distributed. There is nothing there right now to distribute,” he explained. “There is a process right now where some [supply] containers came in. It is currently being sorted at the Festival Village Grounds in Road Town.”

Teams delivered some of the supplies to families identified as being in need, Mr. Penn explained.

Seventh and Eighth District residents can also still go to Elite Superette from noon to 3 p.m. on Monday, Wednesday and Friday to ask questions and voice their needs and concerns, he added.

“There will be someone there to [listen] to whatever concerns you have, whatever assistance you might need, whether you might need some help in your yard [or] to get something done,” the representative said.

Asked whether the supplies were slow in coming, Mr. Penn pointed to the location they were being donated from.

“A lot of the supplies we got recently were from Puerto Rico, and you know Puerto Rico has since been hit by [Hurricane] Maria,” he said. “And now we’ve had some supplies that have come in since from the [Royal] Navy, but in terms of foodstuffs, a lot of the heavy foodstuffs are not there. We get a lot of hygiene products and so forth. Some canned goods but not heavy foodstuffs.”

“We thought initially there may have been a problem, and we were considering other areas of getting our materials into the BVI,” Dr. Smith (R-at large) explained during a press conference. “But I understand the airport will be open tomorrow.”

Despite the lack of aid, Mr. Penn said the Virgin Islands is not yet dealing with a food crisis.

“The reality is that in terms of food, there’s not really food shortage in the territory,” he explained. “There are persons who might be able to afford to buy food, and the supermarkets are open now.”

Though no supermarkets were open yet in East End, Mr. Penn, who also serves as the junior minister for trade and investment promotion, said he was “trying to have a conversation” to get the neighbourhood Rite Way to start serving costumers soon.