Last week former Deputy Premier Dr. Kedrick Pickering announced his intention to contest an at-large seat in next year’s general election. During a rally last Thursday at The Stickett in …

END_OF_DOCUMENT_TOKEN_TO_BE_REPLACED 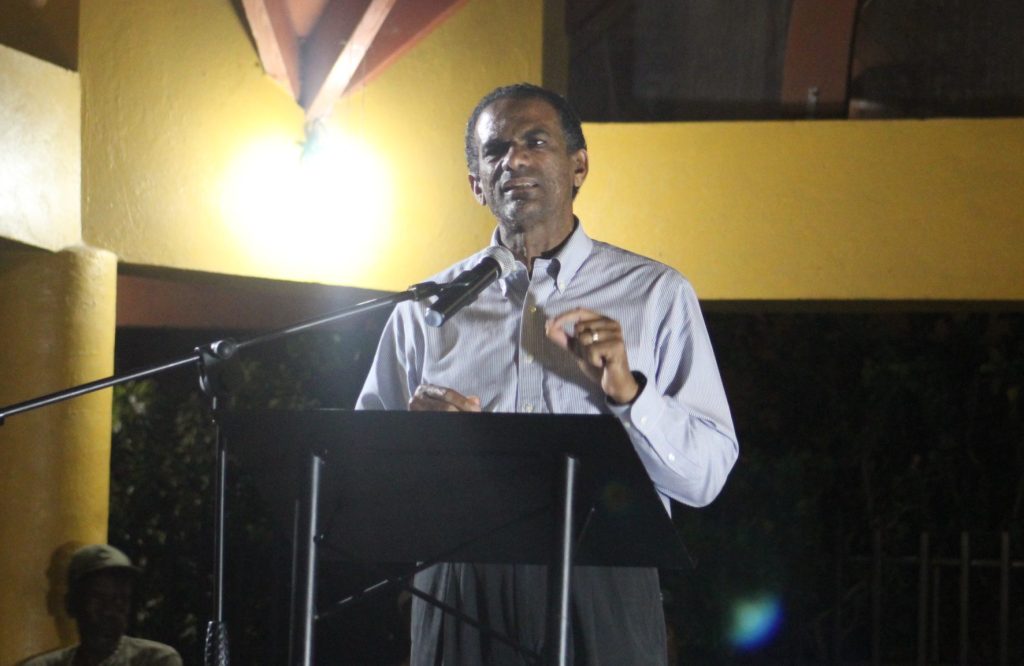 During a rally last Thursday at The Stickett in Long Look, where about two dozen people gathered to listen, Dr. Pickering said he plans to run as an independent candidate.

“I’m here tonight because I have a burning in my spirit and I understand what is going on around us,” he said. “It is one of the most interesting and probably the most difficult times that I’ve seen in the country in my adult life. We are dealing with some big issues.”

During his talk, he touched on the Commission of Inquiry, the pandemic, education, and rising prices due to supply-chain issues.

He urged the public to think about ways the territory can change its business practices, attitudes and approaches. Under these ideas, he said, his banner is “Time to Reset.”

“As a physician and someone who deals with these issues every day, nothing starts when you start to complain about it. It’s been going on for a long time. By the time it starts to manifest in your body, it has already taken root,” he said. “Invariably, the consequences and the end results are sometimes dramatic even to death. Let us not take for granted the issues we’re facing right now that they are simple and that they will blow off. They’re going to have long-term and far-reaching effects on us as people.”

Dr. Pickering served as the Seventh District representative for 20 years starting in 1999, when he was elected under the fledgling National Democratic Party. During that time, he held ministerial roles for three terms under NDP-led governments, and he served as deputy premier from 2011 to 2019.

After the NDP fractured following the retirement of founding leader Dr. Orlando Smith shortly before the 2019 election, Dr. Pickering left the party to run as an independent candidate that year.

However, he lost in a close contest to Virgin Islands Party candidate Dr. Natalio “Sowande” Wheatley, who is now premier.

“Ultimately, I will support someone in this district who is fresh, full of energy and can take on the issues in this district,” Dr. Pickering said during his rally. “But I know that I have the knowledge, experience and expertise to help navigate this country.”

Dr. Pickering added that the next election “has to be held somewhere before the 24th of May” next year.

During a press conference on Friday afternoon, Dr. Wheatley fielded questions about the upcoming elections and said that they will definitely happen.

“I’m not sure why there’s some uncertainty about whether there will be elections,” he said. “The elections will be constitutionally due in 2023.”

Dr. Wheatley also said that he plans to run for re-election in his district.

“Anyone who wants to serve the Virgin Islands and they want to make a positive change for the territory, it’s their democratic right to run for a district or at large,” he added. “I’m also going to exercise my democratic right because of course I would have a lot more that I would want to contribute to the people.”

In the midst of the COI reform process — with a cross-party government in power that includes ministers from three parties — political parties have not yet begun campaigning as they typically do starting several months before elections.