Foxy’s music school is back

When Hurricane Irma hit Jost Van Dyke, Foxy’s Music School was destroyed. Last week, with the help of several donors, the school re-opened with a new building, top-of-the-line gear, and …

END_OF_DOCUMENT_TOKEN_TO_BE_REPLACED 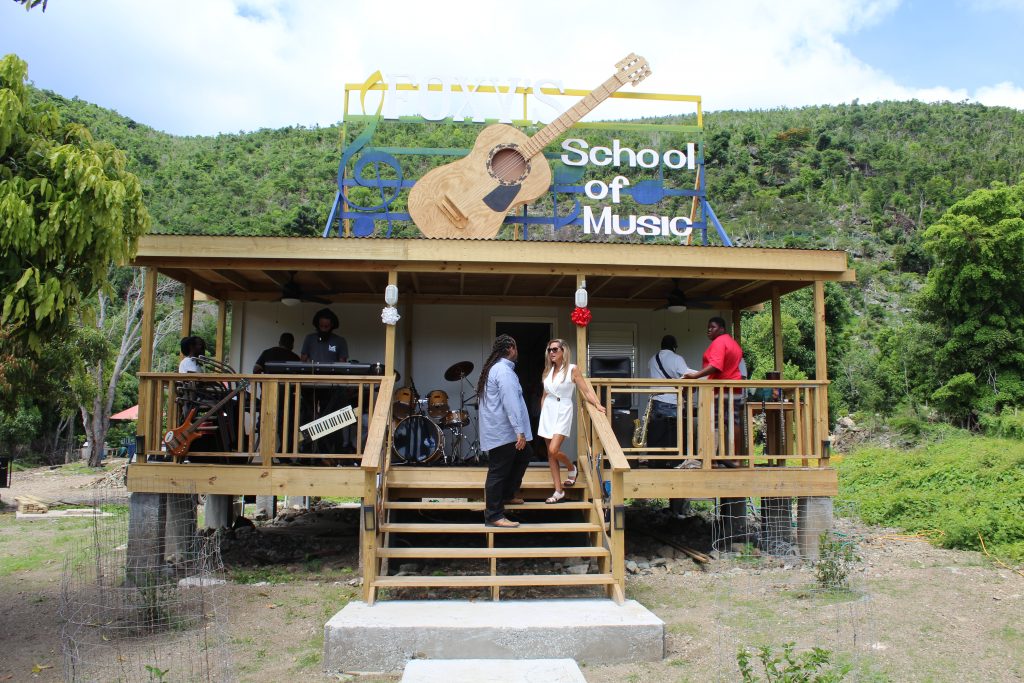 Katherin Dietrich and a friend chat on the steps of the new Foxy’s Music School (Photo: Joey Waldinger)

Last week, with the help of several donors, the school re-opened with a new building, top-of-the-line gear, and an updated curriculum. The goal is not just to teach a fun hobby, but to equip the territory’s youth with profitable skills and expand their options for a bright future.

“This music school is … the tip of the iceberg in terms of the creativity and talent that is un-tapped and unrecognised on Jost Van Dyke,” said Ian Welsch,CEO and founder of The Mo-tivational Edge, a Miami-basednon profit overseeing the school’s programming.

“This is going to be a hub for creativity … and then forward-thinking initiatives looking into the future to preserve Jost VanDyke and move these young people forward.”

Students at the JVD school can attend free lessons five days a week, but learning to strum guitar or play piano will only be a part of the lessons offered at the school, said Rammis Emmanuel Mercado, head of community engagement at the Motivational Edge, which provides programmes for underserved youth and young adults in academic, athletic and creative sectors.

Eventually, students will be able to learn disciplines such as digital design and marketing.“If we can give them these skills … the possibilities are endless,” he said.

During the Aug. 14 opening ceremony, the school received praise from Natural Resources, Labor and Immigration Minister Vincent Wheatley, who, as a lifelong musician, testified to the benefits of a musical education.

He also reiterated that musical and related skills can be extremely profitable. The minister assured the crowd at the ribbon cutting that the school will receive a cheque from the office of Premier Andrew Fahie, though he did not specify the amount. He also assured the crowd that he looks forward to coming back and jamming with the students.

“Make the best of this school, and I will come back and play with you. I promise,” he said. “I’ll bring my saxophone over … and play a song for you.”

Before moving to the VI, Baez spent the last year training at the Motivational Edge’s Florida campus, where he learned the organisation’s philosophy towards music education.

“One thing the Motivational Edge kind of helped me infuse into educating was the therapeutic approach to teaching music,” he said, adding, “It’s avery patient approach; it takes the pressure off the students.”

Like Messrs. Welsch and Rammis, he wants to impart life lessons along with musical ones.“I’m looking forward to, for the younger kids, really helping them, their expression through music; for the older kids, teaching them life skills and professional development skills through music,” he said.

The genesis for the original school came when Tony Martin, a visitor from Atlanta who works in the music business, met Feliciano “Foxy” Callwood, and was inspired by his vision for education on the island, which included music.

Shortly after, Mr. Martin donated at least 90 instruments, and along with some friends held a series of fundraisers to get the school up and running, said Katherine Dietrich, who, along with her husband, David, was instrumental in opening the school’s second iteration.

Their effort was a success. Beginning in 2015, JVD students took lessons every weekend, though the school’s offerings were limited beyond that.

“Nothing survived, not even a drumstick,” Ms. Dietrich said. Mr. and Ms. Dietrich, who have long visited Jost Van Dyke and feel a strong attachment to the island, pitched in with the recovery effort after the hurricane struck.

In doing so, they brought into the fold Mr. Welsch, whose wife had long been friends with Ms. Dietrich. In 2018, The Motivational Edge, along with the Dietrichs and others, began working to revive the shuttered school. “It all happened very organically,” Mr. Dietrich said.

Through a mix of individual donations and the Motivational Edge’s resources, the school is now outfitted with a practice room and recording studio that includes guitars, keyboards, computers, speakers, computers and production equipment.

As noted in the lyrics played by local musicians before the ribbon cutting, “Foxy’s dream came true: There’s a music school in town.”